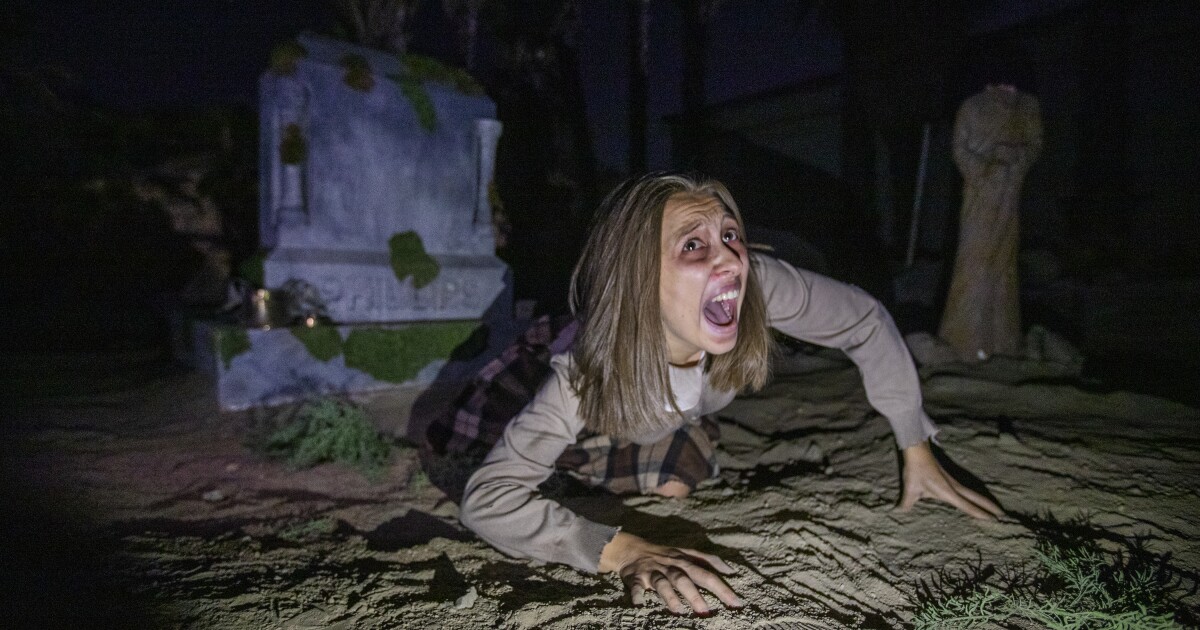 There are scares — one courtesy of synchronized puppetry — and there are impressive, in-the-flesh special effects, such as a head and neck that materialize out of a closet and keep growing. There are even haunted instruments and a talking hourglass.

But for all the theatrical wizardry of the latest iteration of “Delusion,” an interactive horror play that pops up most every Halloween season and is held this year in a historic Pomona mansion, the prevailing emotion is one of delight. That, of course, comes from interacting with the show’s cast.

Forget the abundance of jump scares that populate the high-thoroughfare horror mazes of Southern California theme parks and instead revel in the entertainment of watching an actor crawl up from a grave covered in dirt. Or enjoy a surprisingly calm chat with a murdered, bookish husband who still longs for the woman who slaughtered him.

“Delusion” isn’t the only place for immersive thrills. At the new edition of “Creep LA,” a town has been constructed at the Hollywood bar Three Clubs, transforming the location into a mini-theme-park-like set that houses multiple nooks and tiny buildings. One might find an elderly woman who hopes her wayward daughter will eventually come home, a wheeler-dealer of lost trinkets from long-gone souls and a host of residents who keep crawling their way back to a suspicious house that’s driving them all mad.

It can be startling in this late-pandemic age when the performers of “Creep LA” whisper their desires in your ear, or when one of the living ghosts of “Delusion” grabs your arm and leads you into a crawl space. But the likes of “Delusion” and “Creep LA” have long prioritized intimacy over frights.

“Creep LA” from the beginning has required guests to show either proof of vaccination or a negative COVID-19 test and also gives guests a branded face mask upon entry. “Delusion” opened with a mask but no vaccine requirement, and a spokesman for the show said the company is “reviewing the guidance recently published and we will adhere to all applicable county requirements.”

When “Delusion” began 10 years ago, a primary influence, says creator Jon Braver, was the free-roaming, site-specific theatrical production “Sleep No More.” In turn, over the past decade, Braver and “Delusion” have influenced many a haunt.

Go this year, for instance, to Universal’s Halloween Horror Nights, and experience a maze such as “The Bride of Frankenstein Lives,” which is essentially a walk-through theatrical installation. It’s still filled with corridors meant to disorient visitors, but the set pieces — monsters subject to experimentation — are story-driven rather than scare-focused.

“It took my mom four years to come to my show because she thought it was too scary,” Braver says. “I’m not even that big of a horror fan, to be honest. I just think horror brings people together. I like things like ‘Pan’s Labyrinth’ that are more fantastical. My mom finally did it, and she was mad she missed the other three.”

After the pandemic curtailed, canceled or relegated many events to car-only happenings last year, live Halloween-themed entertainment has returned in force in 2021. And with it the reminder that fall marks the time when Los Angeles, lacking a year-long blockbuster such as Punchdrunk’s “Sleep No More” in New York, goes all-in on immersive entertainment. It’s the rare couple of months when immersive shows are elevated beyond short runs in nontraditional venues often playing to those in the know. Or marketing endeavors from major Hollywood players.

“In the Halloween season, people are ready to play,” says Stephanie Turek, co-artistic director of “Creep LA.” “People are ready to dress up and play pretend. Once they’re able to let go and get into it, they realize they can do other stuff like this. What I would like to do is eventually crack into the audience here in L.A. that might not know they like to pretend as much.”

“Delusion,” which has titled this year’s show “Reaper’s Remorse,” and JFI Productions’ “Creep LA” both offer plenty of opportunities to let one’s mind drift, and more than in years past, are leaning into their gaming influences. “Reaper’s Remorse” uses a quest-like storyline, giving guests a statue in which to “trick” spirits into having their souls trapped. At one point, it presents a stealth scene out of the “Resident Evil” series and visual cues that recall the “Little Nightmares” franchise.

For much of the show, “Creep LA” takes a more relaxed, open-world approach, letting audience members roam and mingle with the cast in an introductory bar scene. Wandering is also encouraged briefly after we are ushered into town, where we are warned to avoid the house we’ll all inevitably traverse or be asked to divulge our deepest longings, with the promise that the house would fulfill them. (Although when I said “true love” the all-around sinister laughter the line received implied the haunted house would be helpless in that regard.)

Both also boast storylines that seem fit for our late-pandemic age.

This year’s “Delusion” begins with what for many has been a rarity the past 18 months — a house party. We’re brought to the mansion of the fictional character Esther Phillips as fellow fans of the occult. Over at “Creep LA,” a house is set up as both a place of mystery and a prison, playing on the idea that we’ve all spent so much time alone and indoors. Both events feature themes of being trapped at home and generally losing one’s mind at the confinement, the loneliness and the desires unfulfilled.

“It was a clever way of taking everything we’ve experienced without it being too on the nose,” says Turek. Company founder Justin Fix adds that the show is a metaphor about “perception,” the conclusions the show’s characters draw when being trapped. Both, however, go light on front-loading plot, encouraging guests to ask questions of the cast in the moments between the action.

Coming out of the pandemic, Braver wanted “Delusion” to feel fully participatory.

“In previous years there would be a lot of dialogue,” says Braver. “There’s a lot of dialogue in the prologue, but the rest is action-oriented. Go here. Do this. It can be hard for people to wrap their heads around. ‘What is the story? What am I doing?’ I’m trying to avoid that. I’m trying to make it more simple. ‘What am I doing here?’ You’re a lover of the occult and you’re at a party of Esther Phillips, who hasn’t had a party in years.”

This year marks the first time Braver’s company has partnered with Thirteenth Floor Entertainment Group, which also stages the Haunted Hayride in Griffith Park, among many other Halloween-focused events around the country. While it’s partly an acknowledgment that it’s hard to go it alone in the immersive world, where events are often low-capacity (“Creep LA’s” run is sold out), Braver also hopes it’s an entrée into staging events year-round.

“Little or big experiences that can exist outside of this season, that’s what I’m looking at now,” Braver says, saying he and Thirteenth Floor are examining a more mysterious show that can play outside of fall.

Turek says JFI Productions currently focuses about 80% of its efforts on marketing-focused activations and 20% on original shows. Even “Creep LA” will go dark for a few nights to promote the Amazon series “I Know What You Did Last Summer,” but soon the company intends to reprise its 1970s-focused nightclub show “Night Fever,” whose initial sold-out run was curtailed at the start of the pandemic.

There are challenges in getting an immersive show up and running, says Tommy Honton, who owns local escape room Stash House and has been vocal in trying to create awareness for the scene. Honton notes that numerous permitting hurdles exist in staging shows in nontraditional venues, in part because not everyone understands that immersive theater is, well, theater. And the temporary nature of the restrictions doesn’t allow shows to build a following.

“Site-specific shows are hard,” Honton says. “A non-theater space that is equipped to handle audiences — you can only get exceptions a couple times per year. So shows that may be very popular and sell out and want to continue offering things, they may not be able to. Maybe five weeks is all you can do, so only people in the know find out and the audiences never grow. By the time the show sells out, they can’t extend.”

JFI Productions hopes working with Three Clubs will be something of a solution, especially with its more populist-themed “Night Fever,” essentially a show in a bar about going to a decadent drinking establishment.

“It’s party-, entertainment-based,” says Turek, noting “Night Fever” is intended to return in the winter or spring to the Three Clubs location. “It’s fun, dark and sexy, and it lends itself to an audience that doesn’t know it would be down for immersive theater. Before you know it you’re in it, and you don’t know who’s an actor or who isn’t.”

Sounds ideal for a city whose primary industry is the suspension of disbelief.