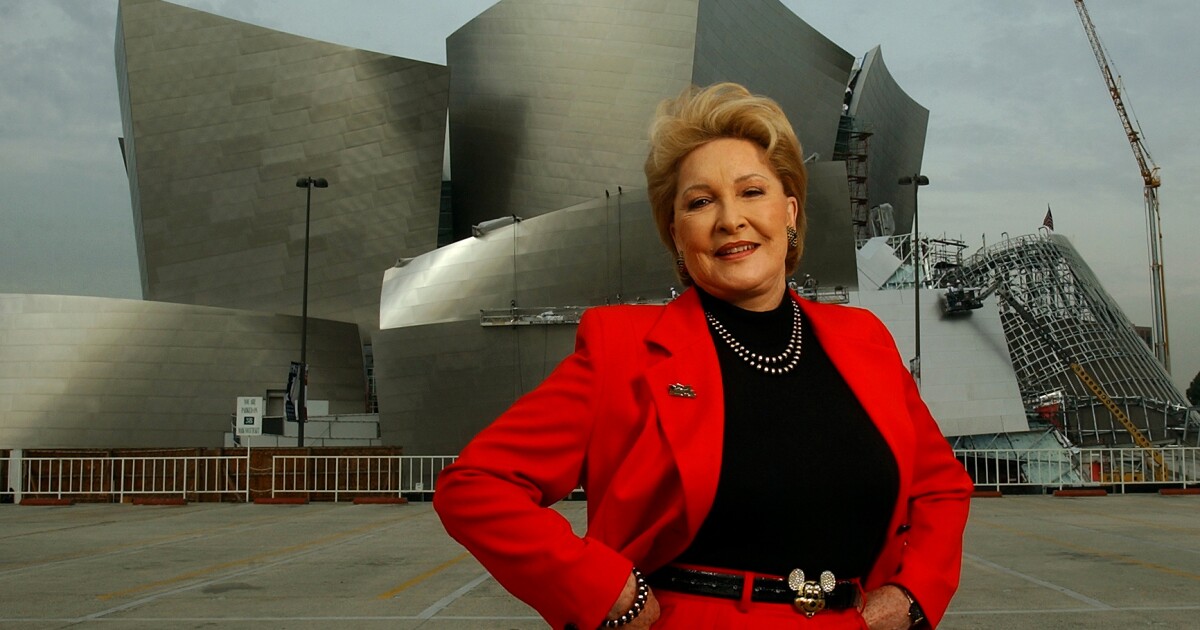 Ginny Mancini, a jazz singer in the heyday of the big-band era who became a generous benefactor to the concert halls of L.A. as well as the city’s small and often struggling music academies for children, has died at her home in Malibu.

One of Hollywood’s leading philanthropists, Mancini died Oct. 25. She was 97.

In the postwar era, she joined band leader Mel Torme right out of Los Angeles City College, then threw in with the Tex Beneke Orchestra as a member of the Mello-Larks. Beneke had recently taken over the Glenn Miller Orchestra and was looking for fresh talent. He found it in the young jazz singer, as well as an uber-talented pianist and arranger named Henry Mancini.

The two married in 1947. Henry Mancini’s career would soon skyrocket, establishing him as one of the most popular and best-known film and TV composers of the 20th century, with 72 Grammy and 18 Oscar nominations.

While Henry Mancini was writing scores for films such as “Breakfast at Tiffany’s,” “The Pink Panther” and the “Peter Gunn” TV series, Ginny Mancini threw herself into causes. She founded a group that raised millions to help support singers who’d fallen on hard times, served as president of a Los Angeles music academy that encouraged young musicians and was an honorary director at the L.A. Philharmonic.

Late in life, Ginny Mancini received a letter from a Boyle Heights nonprofit that caught her attention. She’s never heard of it, but the image of the converted cottage was arresting. It was the sort of place, she later told Times columnist Steve Lopez, that she wished should she could have escaped to as a child. The young students, she imagined, , were much like she’d been — struggling but talented.

She wrote the first of several checks to the Neighborhood Music School. When she visited the tidy academy, with its largely Latino student body, she was struck by its warmth.

“I was able to relate it to my childhood and how much I would have appreciated that school,” she said. “It really resonated for me.”

She was born Virginia O’Connor in Los Angeles on July 25, 1925, and her childhood was one of upheaval. Her father was from Ireland and her mother from Mexico, and the two had met while picking cherries in the San Fernando Valley. The marriage fell apart and a young Ginny was raised speaking Spanish, nurtured by a loving grandmother and great-grandmother who came from what she called “a long line of strong Mexican women.”

The family moved frequently and Ginny helped out wherever they landed — an ice cone factory in Boyle Heights, a dry cleaners in Hollywood, a sheet metal factory in San Pedro.

As a child, she learned to play piano and went on to sing at El Monte High School and L.A. City College before joining Torme and, later, Beneke. In the 1950s, she sang in movie studio choruses and on TV variety programs such as the “Red Skelton Show” and the “Judy Garland Show.”

She went on to found the Society of Singers, a nonprofit for struggling musicians, and served as president of the Henry Mancini Institute, an L.A. academy that encouraged young musicians. She was also an honorary life director at the Los Angeles Philharmonic.

Mancini is survived by two daughters, Monica and Felice; a son, Chris; two grandchildren; and one great-granddaughter. Henry Mancini died of cancer in 1994. All three of her children are involved with music.

What are the best remedies for hay fever

How to stay motivated at the gym, according to personal trainers