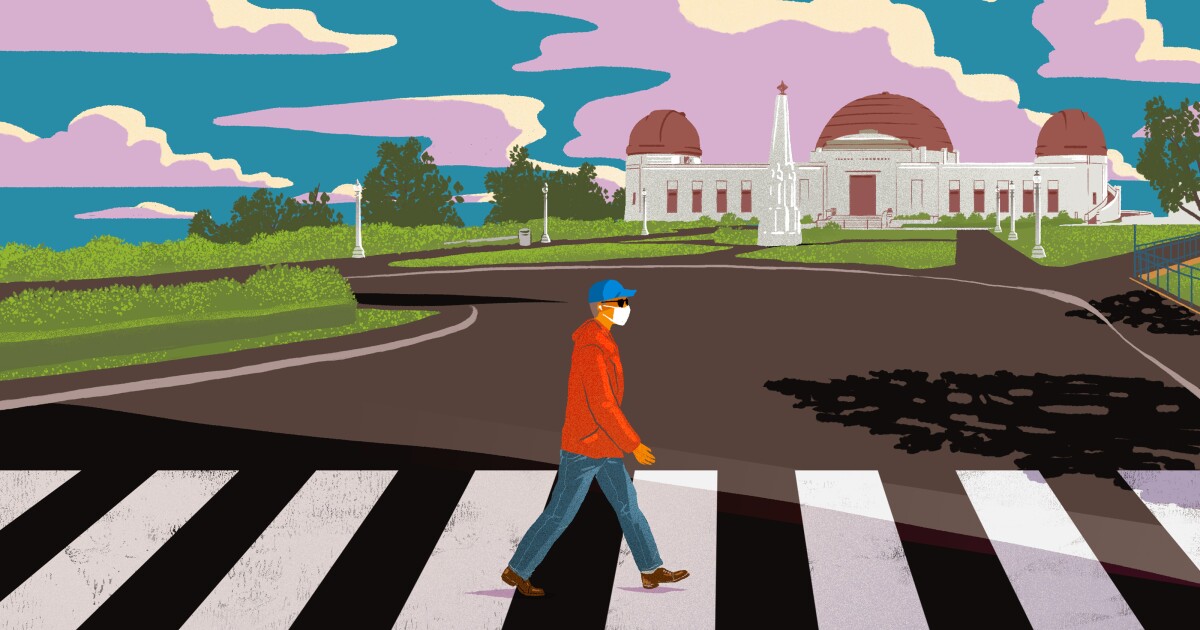 What Just Happened: Notes on a Long Year

If you buy books linked on our site, The Times may earn a commission from Bookshop.org, whose fees support independent bookstores.

For close to a year, beginning with the first “temporary” closures in March 2020, critic and novelist Charles Finch began keeping a diary of his life during the COVID-19 pandemic — a record that began with an assignment from The Times that month. The following excerpt from “What Just Happened,” out Nov. 9, chronicles a day in that life, during which, unexpectedly, the Beatles change everything.

Some days you wake up feeling like a different person than the day before. Not very often for me — mostly it happens behind my back. But I woke up today and remembered something strange that I had vowed in stoned clarity last night, during a long walk toward the Griffith Observatory, which was to remind myself: Listened to Beatles for first time since age 10. But I hadn’t forgotten.

I have listened to the Beatles a lot since I was 10, probably more than any other band. At boarding school I used to drop my backpack on the floor of my room the second the school day was over, put “Abbey Road” on my CD player, then fall on top of my covers and go to sleep as the wintry Massachusetts day faded. I wrote a book listening exclusively to “Revolver” and “Rubber Soul.” I’ve seen Paul McCartney live twice. Once was in Grand Rapids, Michigan. I drove four hours to see him by myself, feeling stupid the whole time, and then, about eight minutes into the concert, discovered to my shock that my arms were raised and eyes were closed, and realized with a start that this must be how religious people feel. The other time was at Dodger Stadium in 2019, not long before COVID — a huge outdoor crowd, the kind that wouldn’t look the same for a long time, or maybe ever — and Ringo came on at the end. You could feel people’s hearts bursting. The last two Beatles on stage, right in front of us; everyone understood it was sacred, at least to some.

But I know their songs by heart from a time well before any of that, because I listened to them so much when I was young that they became part of my deepest circuitry. I was a child of the humble cassette tape era, and I’d say I flipped every one of their tapes a thousand times, some ten times as often as that. The place in my house I was happiest when I was 7 and 8 was an armchair in the corner of our living room. No one passed through it unless they wanted to, because of the unusual configuration of the stairway and the kitchen, and I could be alone there. I’d stay there with my tape player and listen to the Beatles for hours while I read. They’ll be in a brain as long as there is my brain.

Yesterday it was a cool evening at last after this blazing month, half a year into quarantine: no sign of a vaccine, still (like so many people) immunocompromised, grimly determined to stay home and stay safe. I was walking in Griffith Park. It was cloudy, the wind measuring everything, swaying the tennis nets. Discarded blue surgical masks fluttered around the street, and walking the empty hillside felt good, my body limbering and loosening.

As I walked, I thought about the last few days, which I’ve spent writing a long descriptive passage of when I first got badly sick, as a kid. It’s the first time I’ve written about it. Though the condition still affects me, I thought I had moved beyond thinking so much about those acute days. But maybe not. I thought moodily of the way I should really have put it, which was to say that ultimately there’s just one of those “two types of people” things I believe, and it’s that there are those who have been sick and those who haven’t. Neither side is special, and by “sick” I don’t mean any specific thing, I just mean there are people who have been at war with their bodies. Not pain, but a contraction of your whole existence into nothing except pain. Everyone has to answer for themselves whether they know what that feels like.

Then, while I was walking in long pissed-off strides, thinking about all the things I should have written, I realized that Spotify had tossed out a Beatles song at random. I kind of avoid them on Spotify — too tender, too real. It was “I’ll Get You,” which is really a true 50/50 Paul and John song, and as I listened, the song slipped behind my defenses so easily that it took me a moment to realize what was happening, that I was hearing it, first in indistinct glimmers, then completely, with the same ears as I had when I was little.

It sounds so slight the day afterward, like most such experiences. (It’s all in William James.) But it wasn’t. When the song ended I put on a random Beatles playlist, practically in a trance. I didn’t even want to look at my phone for long enough to get distracted by a text, I didn’t want to lose the feeling, and walked for hours through the night, listening. I had put so much of myself inside those songs for safekeeping. If I was someone who could cry, which is an aspiration I have, I think I would have cried; at least, my face was warm, and I had a feeling of disbelief which is what I think crying must be like, when your inner life and the world are so different that you can only reconcile them by crying tears.

There are millions of bigger Beatles fans than I am, but I feel stubbornly certain in my heart that no one can love the Beatles more than I do. They were incredibly alive to me from the moment I heard them. Looking back, I think it was their joyfulness I found so mesmerizing. Even their saddest songs have an undercurrent of happiness. (You’re never too far from a 7th chord with the Beatles.) I think it’s because they were four working class kids whose crazy plan had actually worked. Especially in their early pictures they look dumbstruck to be so famous and gifted and rich and happy. It’s there in their first perfect song, “Please Please Me.” A minute and a half in, John and Paul mess up the lyrics, then sort of cover it as they launch, with John laughing — but not to the listener, just caught up in the happiness of the playing with Paul, this other genius he found in Liverpool — and then covering the laugh with the start of the chorus.

That joy in life, that freedom, is what makes their music different from all other music. “Even in the most sublimated work of art there is a hidden it should be otherwise,” said Theodor Adorno. I’ve prodded the thought for soft spots, because aphorisms can be cheap, but I think it’s brilliant and sad. I also think there’s an exception: the Beatles. Even at their most grizzled, they were on a grand adventure. “When you get to the top there is nowhere to go but down,” Philip Larkin once said. “But the Beatles could not get down.” None of them was even 30 when the band broke up.

Last night, I listened to all of it. In my head I tracked the other songs in which various band members laugh (“I Should Have Known Better,” “It’s Only Love,” “If I Fell,” etc.) and observed with intense satisfying scrutiny just how weird and sad and good John’s parts of “A Day in the Life” are, so much of each that it’s hard to believe it’s a part of mainstream culture, until you remember that one of Paul’s transcendent gifts is to lift the sensation of hopelessness from a song without rejecting its presence. I listened to “I’ve Got a Feeling.” “Everybody had a hard year.” I nodded, in the misting dark, as I headed home. In my defense it was very late by then. Everybody had a hard year.

Something obvious occurred to me, which is how vitally important music must have been to so many of us since the start of the lockdowns. Usually we encounter dozens of people a week; now, for months, if you’ve been keeping safe, it’s one or two a week, greeted with tight, scared, friendly nods at the grocery store or pharmacy. In this solitude, music takes on strange new emotional intensity, or at least has for me, from the tender start-of-quarantine March moments when I was listening to Fleetwood Mac (could we handle the seasons of our lives? Unclear!) to the cooling summer company of Funkadelic.

But this felt different, as if the music had reached farther into me than usual. As I arrived home completely sober, completely exhausted and listening to “Hello, Goodbye,” I said hello to these four old friends of mine, and I very cautiously said hello to myself when I was eight, a person whose characteristics and dreams I think I have largely forgotten. But that was me, as definitely as I am myself now.

“Hello, Goodbye” was their first single after their manager Brian Epstein died. It was with Epstein’s death and that song that the Beatles lost their initial illusions, and their music from then on became more interesting, and it also became inevitable that the band would end. Typically brilliant of them to give us an album from their 20th year together without having to get there, which I think they knew they wouldn’t: Sgt. Pepper.

Am I alone in having gone into different parts of myself during these last few months? I think no, it’s the other way: that none of us had to think about ourselves and how we move through the days of our lives this deeply before. All of us went inside as certain people in March; it will be interesting to see who walks out. Whatever it was, the music as I walked felt like water flowing down dry riverbeds. It occurred to me that in this year of change, it might be possible for me to change. I went to bed at a rare peace with everything — or really, truthfully, with the deep past, I suppose, which has always been so present in my adult life, never cleansed of its meaning, rushing farther away and closer every minute.