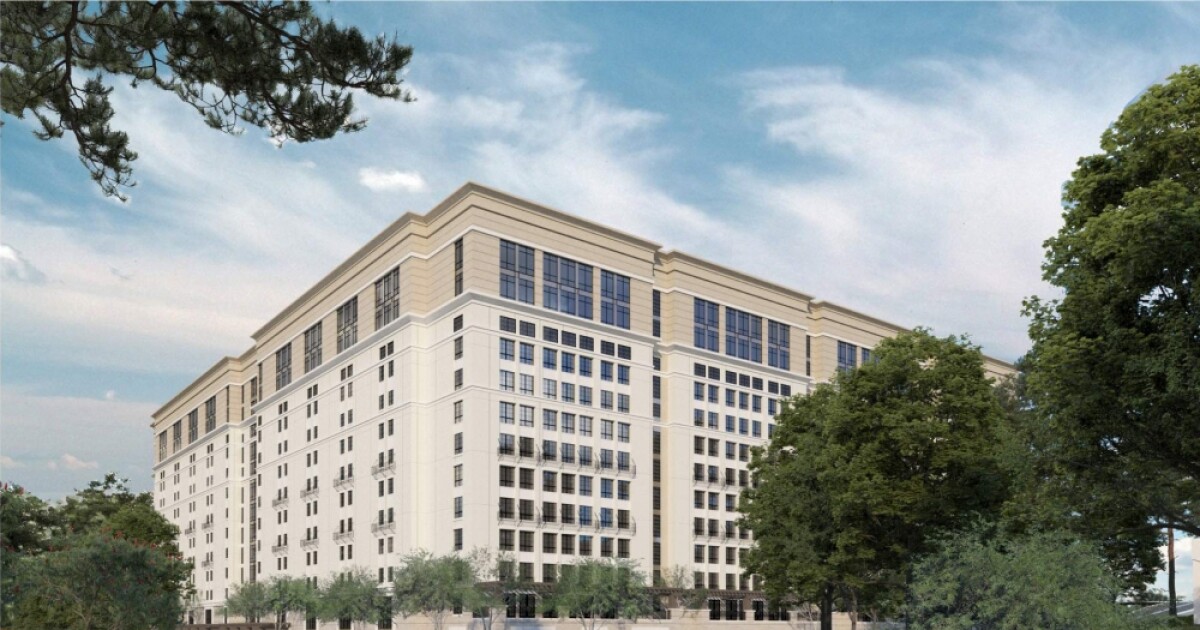 There is dumb. There is dumber. And then there is whatever is happening at UC Santa Barbara in the planning and design of a new student dorm — which takes dumb and multiplies it by a factor of willful ignorance squared.

The back story: UC Santa Barbara is in the middle of grappling with a student housing crunch that has the university housing some students in hotels. Enter 97-year-old billionaire Charles Munger, an executive at Berkshire Hathaway, who is not a licensed architect but seems to want to play one on TV.

The plan: In 2016, Munger announced he would donate $200 million to the university for a student dorm building he would design — and name after — himself.

His solution to the housing crunch? Stuff more than 4,500 students into an 11-story warehouse-size building in which the overwhelming majority of the units — about 94% — do not have access to natural light or fresh air.

In lieu of windows, students in Munger Hall would instead use a knob to manipulate the degree of artificial light illuminating their cells … I mean, rooms. And because that isn’t enough dystopia, the whole fake lighting system was inspired by the artificial portholes that Disney devised for its cruise ships. (Don’t let the renderings, which feature lots of exterior windows, fool you; the building is designed at such a massive scale, the bulk of the square footage is largely internal.)

All of this landed in the headlines late last week, after the Santa Barbara Independent reported that Los Angeles architect Dennis McFadden, a design principal at Leo A. Daly, who had served on UC Santa Barbara’s design review committee for nearly 15 years, had resigned from the committee in protest over the project.

“The basic concept of Munger Hall as a place for students to live is unsupportable from my perspective as an architect, a parent and a human being,” he wrote in his resignation letter, which was later leaked on the image-sharing site Imgur. “I cannot give tacit approval to this project, something I believe I would be doing by continuing my role as a consulting architect to the DRC.”

McFadden also notes that the committee — which was established to help the university achieve “design of the highest possible quality” — was given no opportunity to challenge, evolve or finesse Munger’s design.

“It was clear the DRC was a mere formality,” wrote McFadden. “The design was described as 100% complete, approval was not requested, no vote was taken and no further submittals are intended or required.”

In the past, Munger has shown little appetite for the idiosyncrasies of design. In a 2019 interview with the Wall Street Journal, he described most conventional architecture as “massively stupid” and noted, “Either I change architects or he does it my way.”

Over the weekend, in an interview with CBS Marketwatch, Munger expressed little in the way of regret over the Santa Barbara brouhaha: “You’ve got to get used to the fact that billionaires aren’t the most popular people in our society. … I’d rather be a billionaire and not loved by everybody than not have any money.”

UC Santa Barbara’s leadership, which appears to be held hostage by Munger’s financial largesse, has developed an advanced case of Stockholm syndrome. In July, the university’s chancellor, Henry T. Yang, described the dorm as an “inspired and revolutionary design concept.”

Late last week, a university spokesperson confirmed to The Times that “this transformational project” would be moving forward as planned.

The design is a lot of things, but “inspired” is not one of them.

The design suffers from a pile-on of deficiencies — among them, a willful, warehouse blandness, limited egress and an extreme density that McFadden likens in his letter to parts of Dhaka, Bangladesh. But the lack of windows in the residential units is perhaps the most glaring problem — especially in light of the pandemic.

In its published guidelines for designing for well-being, the American Institute of Architects recommends providing “operable windows in regularly occupied spaces.” And an extensive 2014 report on daylighting by Architect, the institute’s magazine, cites multiple studies that show that access to daylight can increase productivity, comfort and well-being.

In his resignation letter, McFadden noted that “an ample body of documented evidence shows that interior environments with access to natural light, air and views to nature improve both the physical and mental wellbeing of occupants.”

“The Munger Hall design ignores this evidence and seems to take the position that it doesn’t matter,” he continued.

“The design team offered no research or data to justify the radical departure from student housing standards, historical trends, evidence-based design principles and basic sustainability principles,” he added. “Rather, as the ‘vision’ of a single donor, the building is a social and psychological experiment with an unknown impact on the lives and personal development of the undergraduates the University serves.”

Munger, interestingly, has carried out his no-windows experiment elsewhere.

He helped fund and design the Munger Graduate Residences, which opened at the University of Michigan in Ann Arbor in 2019. That 380,000-square-foot building is but a fraction of the size of the proposed Santa Barbara dorm, which checks in at almost 1.7 million square feet — and which the Santa Barbara Independent has baptized “Dormzilla.” But, like the Santa Barbara project, that building harbored cells without windows.

Munger recently told the Washington Post that his Michigan design was successful. “I was just there last month and the students are absolutely in orbit,” he stated. “They love the place, and the university loves having it.”

That takeaway seems wildly optimistic given some reviews of the building on websites like Yelp and the apartment site VeryApt. While some students are OK with sacrificing windows in the interest of having centrally located housing, many were suffocated by the lack of daylight.

“The lack of windows is very depressing,” wrote one student in an evaluation posted late last month.

Another was more direct: “Good luck surviving seasonal depression or maintaining your slowly failing eyesight, especially during a pandemic [when] you should not be spending long periods in common spaces, when 95% of the rooms in Munger have NO WINDOW.”

Munger’s “revolutionary” design is really about jamming as many bodies as possible into as little square footage as possible — well beyond the typically soulless dormitory high-rises on campuses around the country (which at least come with windows).

The building is a social and psychological experiment with an unknown impact on the lives and personal development of the undergraduates the University serves.

If fresh air and daylight were once considered quaint niceties by designers and developers, the COVID-19 pandemic has turned them into a matter of urgency — reinvigorating calls for designs that employ passive design to ventilate buildings (air currents, windows and vents) over costly ventilation systems that often simply recirculate stale air.

As one MBA student wrote of living in the Michigan dorm: “It was great up until the covid started, staying in an apartment with no windows and no access to other facilities within the building isn’t worth it.”

It probably comes as little surprise then that the renderings of Munger Hall on UCSB’s website show only the exterior and daylight-saturated common areas. You’ll have to dig into the university’s website, into a post by the Office of Strategic Asset Management, to find a link to a presentation by the executive architects — Van Tilburg, Banvard & Soderbergh — to see the prison-cell layout of the residential floors.

The university has a tradition of hiring intriguing architects to work on the campus, such as the Postmodernist Charles Moore (as noted by critic and author Paul Goldberger last week). In addition, in 2017, the university opened the doors on a student housing complex designed by Lorcan O’Herlihy, a Los Angeles architect known for his humane, yet dense, designs. His San Joaquin student housing complex is a model of well-building principles: Three stories of dorms are stacked around a garden courtyard. All of the units feature cross ventilation and direct access to the outdoors.

In addition to designing the prison-like dorms for which he is fast becoming known, he helped develop and design a seaside enclave in Montecito called Sea Meadow — a neighborhood that one Santa Barbara real estate site refers to as “Mungerville” — where he maintains a residence.

I spent an afternoon lurking on various real estate websites of Sea Meadow, which reveal that all of those multimillion-dollar houses — designed in the French Normandy style (because when I think Santa Barbara I think French Normandy) — have lots of windows and direct access to fresh air.

Go figure that what’s good for Munger and his wealthy friends isn’t good for anyone else.

I have sympathy for UC Santa Barbara administrators contending with a housing crunch that has stranded students in hotels. But a windowless warehouse that doesn’t have the architectural charm of even a Comfort Inn is not the solution. If Munger thinks windowless buildings are such a great idea, he’s welcome to build them — French Normandy style — on his oversize lot in Montecito.

But designing without air and light is an architecture of cruelty.

The only purpose it could one day serve is as a course of study for university students majoring in the history of art and architecture. Because the only thing Munger Hall is destined to become is an example of what not to do.