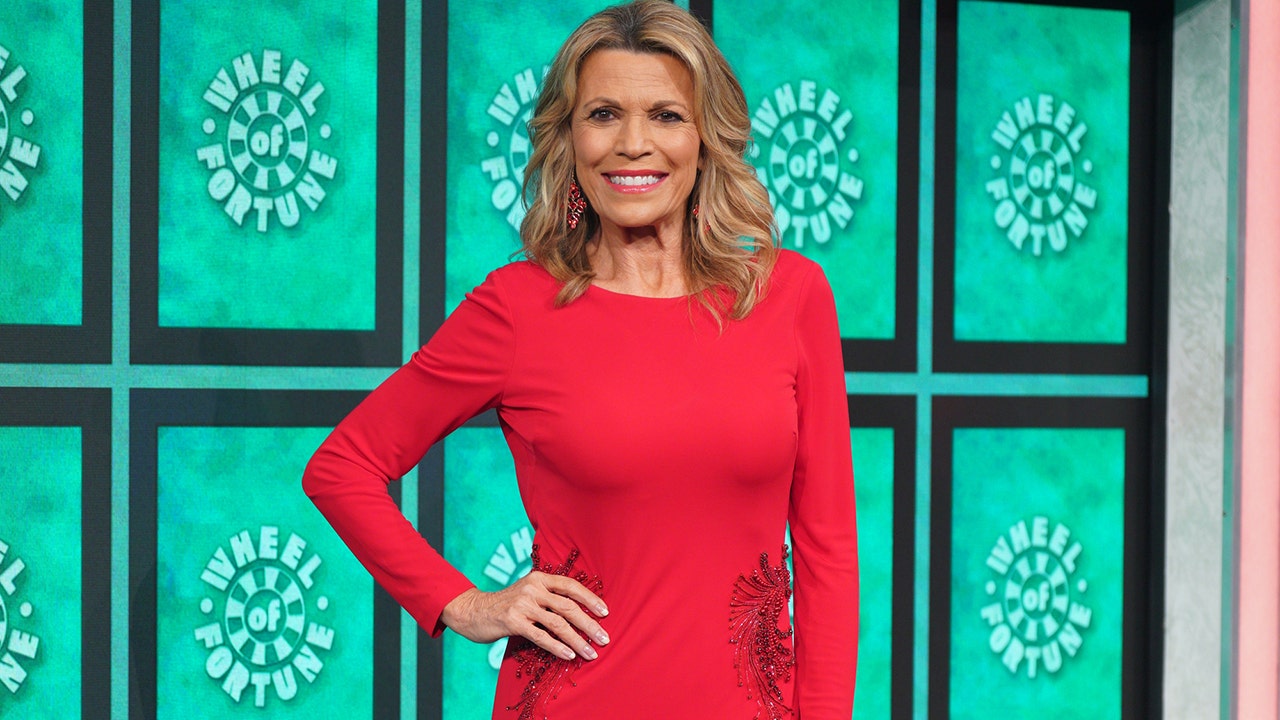 Vanna White has graced television screens as co-host of “Wheel of Fortune” for over four decades.

During her lengthy career, White, 65, has worn over 7,000 outfits, but her most recent look last week caused quite a stir. On Jan. 18, the game show hostess appeared on stage in a hot pink, asymmetrical dress with black pants underneath.

The wardrobe took social media by storm following the episode, with some fans calling her outfit “strange.”

“Vanna White in her Marvel superhero outfit tonight,” one tweet read. “Vanna White’s stylist needs a day off…” another user tweeted. Others, however, took a liking to the fashion choice, calling White’s unique outfit “funky and cool,” and one Twitter user questioned why the game show hostess was being criticized in the first place.

HOW MANY DRESSES DOES VANNA WHITE OWN? INSIDE THE ‘WHEEL OF FORTUNE’ CO-HOST’S WARDROBE

“What’s the big deal, she looks great in this dress. Give her a break. Keep on keeping on girl!!”

Here’s a look at some other moments when White has dominated headlines.

In 2016, White got candid about her 1987 Playboy cover, revealing she “regrets” posing for the magazine.

“I wasn’t on there because I wanted to be,” she said on an episode of the “Wendy Williams Show” at the time.

Vanna White posed for Playboy in 1997. She was pictured here at a book signing in May of the same year.
(Photo By Ann Summa)

“What happened was when I moved to Hollywood, I was too embarrassed to ask my dad for money for rent,” she continued. “I did some lingerie shots, like we all do sometimes…back in those days, and Hugh Hefner bought the pictures.”

A LOOK BACK AT VANNA WHITE’S 40 YEARS ON ‘WHEEL OF FORTUNE’: GAMES, FASHION AND ‘VANNAMANIA’

White explained to Williams that she was not fond of the late Hugh Hefner’s decision to have her on the cover.

“Hugh was my friend and he said, ‘Vanna, we are going to put you on the cover.’ I said, ‘If you put me on the cover, my career could be ruined,’ and they did it anyway,” White explained. “I don’t talk to him, I feel bad, it was a long time ago but that really hurt my feelings.”

Vanna White said she and the late Hugh Hefner were close friends at that time.
(Ann Johansson/Corbis via Getty Images)

She continued, “Thanks to everyone out there who was on my side. They didn’t fire me and everybody was very supportive. It was a great lesson. Don’t ever do anything that you think is wrong, listen to that little voice inside of you. I wish I wouldn’t have done it and I did it.”

The mistake that left her ‘mortified’

Last year, White revealed on “The Kelly Clarkson Show” she made a mistake flipping cards on the game show that still troubles her, decades later.

“I was mortified,” White said of the moment during the beginning of her career when she was required to manually flip the game cards around. “I don’t even remember which was the correct puzzle. It was either ‘Dr. Spock’ or ‘Mr. Spock,’ and I turned the ‘M’ or the ‘D.’ And it was like, ‘That’s the wrong letter! Oh, my gosh!’”

White was animated reliving the embarrassing moment and added, “I’m scarred for life on that.”

The game show hostess shared how a mistake is corrected on the show. “They had to throw (the puzzle) out and put another one in,” she explained.

That was a one-time mistake, thanks to “Wheel of Fortune” turning their letters digital in 1997.

“Fortunately, in 1997, they changed the puzzle board, where I only touch the letters,” White said. “And when I touch them, I won’t touch them unless they light up.”

Since White is not in charge of what the digital card presents, if there is another mistake on the show, she is aware it is not her fault. “The mistake will not be mine,” she explained to Clarkson.

In 2022, White shared a revelation with her co-host, Pat Sajak, that made him throw his hands in the air and walk right off-stage.

In March, a contestant named Chris did not solve the final puzzle, “flavorful dumplings,” which sparked a conversation between the co-hosts regarding food.

“I have a confession to make,” White said to Sajak. “I don’t make my own dumplings. I use canned biscuits. There you go.”

“I can’t take this,” Sajak replied, while shaking his head, throwing his hands in the air and exiting the stage.

White was left alone on the stage, when she thanked fans for tuning in and concluded the show.

Vanna White and Pat Sajak joined “Wheel of Fortune” as co-hosts in 1982 and 1981, respectively.
(Ricky Middlesworth/ABC via Getty Images)

In the comment section on the YouTube video, fans quickly shared how they found that moment hilarious.

“That was hilarious!! We love Vanna,” one user wrote, with another adding, “Just when you thought you knew somebody! Oh, well. We love you just the same, Vanna!”

Vanna was ‘terrified’ to take over hosting duties for Pat

While Sajak recovered from surgery in 2019, the pressure to lead the show was entirely on White’s shoulders.

Initially, White was surprised the “Wheel of Fortune” producers wanted her to host the show.

Pat Sajak stepped away from hosting duties on “Wheel of Fortune” in 2019 after a surgery.
(Getty Images)

“I’m busy with my letters and my puzzle board,” White joked. “I mean, I’m hearin’ him, but I don’t really pay that much attention.”

She added she was “terrified” but “did it.”

“[You] have to be aware of everything that’s going on, where before all I had to worry about was letters,” she explained. “Now I have to carry the whole show, I have to talk to all three players and make sure I get their scores right.”

Vanna White was “terrified” to take on host duties on the game show while Pat Sajak was recovering from surgery.
(Christopher Willard/ABC)

White hosted for three weeks while Sajak recovered from surgery after he left a taping due to stomach pain in Nov. 2019.

“Our taping on Thursday was canceled because host Pat Sajak underwent successful emergency surgery to correct a blocked intestine,” the show’s Twitter account confirmed at the time.

40 years on ‘Wheel of Fortune’

White took to Instagram to celebrate the big accomplishment by posting two pictures of her and co-host Sajak.

“I can’t believe I’m saying this, but 40 years ago today I taped my first episode of @wheeloffortune It’s been a wonderful 40 years, too,” White wrote. “I’m so grateful to those of you who watch and everyone behind the scenes who make us look good. We wouldn’t still be here without all of you! (And the cake was delicious!)”

During the taping of her anniversary episode, the crew presented White a “Wheel of Fortune” cake, featuring the iconic letter board, which spells “Vanna,” and a number of cutouts of White in beautiful gowns she’s worn over her decades on the show.

The official “Wheel of Fortune” Instagram account also posted its own tribute to White, sharing a behind-the-scenes video of the moment the crew surprised her with the cake.

She could be seen wearing a pink dress, saying in the video that she was “overwhelmed,” and Sajak can be heard congratulating her.

“It was 40 years ago … this young lady walked into the studio, trembling, and did her first ‘Wheel of Fortune’ … happy 40th, my dear,” Sajak said.

After four decades, Vanna is having a tough time thinking about the end of her time on “Wheel of Fortune.”

In 1975, the game show premiered with Chuck Woolery and Susan Stafford leading the show as hosts. It was not until 1982 and 1981 that White and Sajak took over as co-hosts, respectively.

“I think when Merv Griffin chose both of us, 40 and 41 years ago, he saw something between us — a brother-sister type relationship,” White shared in an interview with People magazine in December.

After four decades, Vanna White is having a tough time thinking about the end of her time on “Wheel of Fortune.”
(Ron Tom/NBCU Photo Bank)

“And I think that is kind of what it is. He saw that we would be able to get along, and we do. We are like a brother and sister team.”

In September 2021, Sajak, 76, revealed that he and White were “closer to the end than the beginning” of hosting the game show. White is having a harder time saying goodbye.

During this time, Variety reported that both White and Sajak renewed their contracts through at least the 2023-2024 television series, so it is unclear exactly when the duo will make their exit.

Vanna White said she “can’t imagine” the game show without her and Pat Sajak.
(Christopher Willard/ABC via Getty Images)

White revealed that it is hard for her to visualize what “Wheel of Fortune” will look like without either host. “I just visualize us just being there. I can’t think beyond that,” she explained.

She noted that she is unsure if the game show will go on without her and Sajak.

“I can’t imagine. Everybody relates ‘Wheel of Fortune’ to Pat and Vanna. We’re like Ken and Barbie, you know?” White said. “We’ve been in everybody’s homes for 40 years, so it would be weird having somebody else turn my letters.”

Looking back on her time on the show, White said she is grateful for the past 40 years as co-host of “Wheel of Fortune.”

“It’s incredible. I cannot believe it’s been 40 years. Honestly, I’ve loved every minute of it,” she said.

White continued: “Who still says they love their job after 40 years? Me! I really do. It’s a fun show. Everybody watches and enjoys it and it changes people’s lives and it makes people happy. So it’s a great job.”