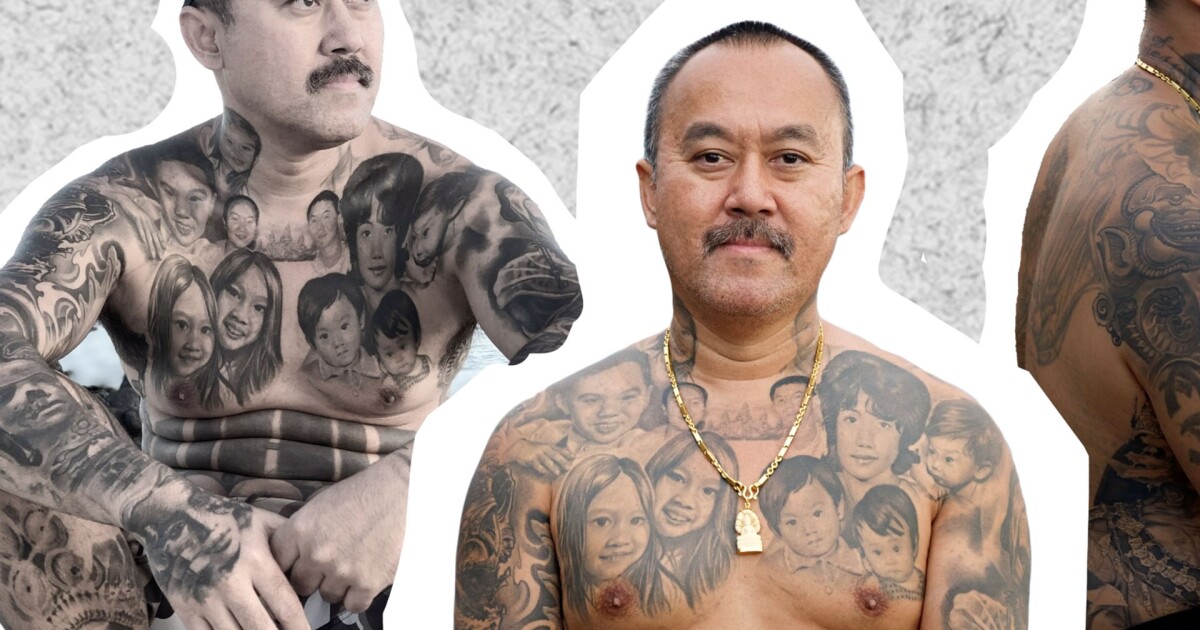 Robert Pho is one of the finest black-and-gray realism tattoo artists on the planet. Collectors from around the world fly to his Honolulu studio for a chance to lie on his table. A wealthy patron once paid Pho $300,000 for a full body suit, a swirl of clowns and mobsters and mythological gods popping off every inch of his skin.

Pho’s talent isn’t the only thing that captivates customers. Many are drawn to his backstory: a Cambodian kid who got caught up in the Southern California gang life — and then turned it all around to become a tattoo master, activist and, some say, therapist.

I met Pho one day at Rodeo 39 Public Market in Stanton, the home of his newest tattoo shop and his first in California. He held his baby, Vanna, on his lap during the visit.

The soft-spoken Pho tells his tale with kind eyes and a serene smile, the kind of smile you see in yoga studios. He says he is embarrassed by his “ugly past” but that it was there in prison that his spiritual search began.

“I believe in fate, the universe coming together, all that,” he says. “I very strongly believe that God has looked out for me and he’s the reason why I am where I am today.”

Pho, 48, was born in Cambodia during the Vietnam War. When he was 2, his family fled to France, and when he was 10, they arrived in the San Gabriel Valley.

It was in L.A. County that Pho fell in with a gang and eventually ran away from home to live with his crew. On St. Patrick’s Day 1989, Pho, who was 16, was rousted in a predawn house raid and arrested on suspicion of attempted murder.

He took a plea deal in exchange for 14 years behind bars and was sent to the notorious Youth Training School, a juvenile prison in Chino so violent (it closed in 2010) that inmates nicknamed it “Gladiator School.”

It was there that Pho’s tattoo career began. He bought a guitar string off an inmate to use as a needle and rigged it with the motor from his prison-approved Sony Walkman. The first tattoo he did was his gang name on his own knees. Then he started charging other inmates $60 to $80 a tat to survive. He needed money to pay the gang leaders he was locked up with — to buy their protection.

Pho got better at tattooing but didn’t get the chance to get too creative. “Everything was gang-related; nobody got butterflies,” he says.

In 1995, nearly seven years and hundreds of tattoos later, Pho, by now in the Mule Creek State Prison in Ione, was paroled. Waiting for him was a high school classmate named Cristina, his only prison pen pal.

The two were never an item, but when he wrote to her from prison, she wrote him back.

“It was nice getting mail from him,” she says. “He even drew on the envelopes — flowers and nice things. I would tell him how my life was going.”

And he would tell her how he got caught tattooing again, adding time to his sentence.

After he was paroled, the two started to hang out and became a couple. One day, he tattooed his name on her butt — his Cambodian name, Daravan.

“I just liked the meaning behind it,” says Cristina, who is Filipina. “It means the moon and stars, but it’s deeper than that.”

Since Pho was on parole, finding a job was hard. He started selling random stuff door-to-door: calculators, stuffed animals, calendars. He continued to do tattoos on the side though.

One day, a paroled friend from prison phoned Pho to ask if he would help him at his tattoo studio, Skin Design, in Lexington, N.C. Pho packed his bags. A year later, with business blowing up, the partners got permits to open a bigger space in the nearby city of High Point, America’s furniture capital.

This was 1999, before tattoos became as mainstream as Mickey Mouse. Tattoo shops were still shady as far as Main Street was concerned and relegated to areas zoned for strip clubs.

“The whole neighborhood got together, hired big-shot attorneys,” Pho says. “They were trying to do everything in their power to get rid of us. There were people with picket signs. It was just crazy. We were on the news every day. I had to fight. I wanted to prove to people that we were just a regular business.”

Skin Design won the fight, earning Pho a reputation as a champion of tattoo culture as well as a rising star in the world of black-and-gray realism. In 2003, Pho bought out his partner and left North Carolina to open a solo Skin Design studio in Las Vegas. He opened his second shop in Honolulu in 2018. The following year, he opened a third studio in Brooklyn, N.Y. His fourth Skin Design opened last fall at Rodeo 39 in Stanton, a blink-and-you’ll-miss-it city in Orange County.

“We were looking to come to California, and then this fell into our lap,” Pho says, again invoking fate. “They reached out to us.”

He blessed the new studio the same way he blesses all his shops — by tattooing his wife, the same woman who was waiting for him the day he walked out of prison. The tattoo: a rendering of their baby’s eye.

Pho now flies into Orange County every few months from his home in Hawaii. On one recent trip, he spent an afternoon tattooing Brooklyn Martell, who drove 300 miles from Las Vegas. The plant shop owner had been lurking on Pho’s Instagram, a feast of smooth black-and-gray realism, for nearly a year before booking him.

“I was obsessing, watching his videos constantly,” she says of Pho’s YouTube channel, Marked Pho Life. “I had a savings. I didn’t know what to use it for. And then I used it.”

Martell, 29, says Pho’s friendship has become as dear to her as the Greek gods he has tattooed on her leg. “The artwork is insane, but I just love his presence,” she says. “He has a special quality of making people feel heard.”

Like Pho, Martell’s dad was a gang member and in and out of California prisons all her life.

“Robert lived that lifestyle and turned it around, and now he’s a family man,” she says. “It’s really special when you meet someone who’s come out through the other end.”

Clients fly in from around the world to his Honolulu studio, his home base. Pho spends a day or two with them — or 2½ years, in the case of Monte McMann, who spent $300,000 for a full bodysuit. Pho worked on him in eight-hour sessions once a week at his Vegas studio.

“Most people, they have a story,” says Pho, whose tattoos start at $4,000. “And when they hear my story, they want to connect.”

Some cry on his table, he says. “They have a sad past. Maybe they can’t get over it. We talk about our struggles, our relationships. I feel like the universe put us together.”

Earlier this year, lightweight WBC boxing champ Lord Devin “The Dream” Haney contacted Pho and asked him to fly to Vegas and give him his first tat: A portrait on his leg of Haney’s first knockout. “Thank you Robert Pho for going crazy on my first tat!” the boxer wrote under a photo he shared with his nearly 1 million Instagram followers.

In addition to befriending clients, Pho has a reputation for taking care of the tattoo artists who pass through his studios, helping them fix their credit, open bank accounts, take out loans and start their own business when they’re ready to go solo.

“I care about them,” he says. “With me, they go from being a tattoo artist to being a businessman.”

Just like he did. Pho, the immigrant who wound up in a gang and then prison, now lives in the affluent Hawaii Kai neighborhood on the southern shore of Oahu with his wife and three daughters — and soon a camera crew.

A documentary and reality show are possibly in his future, although he signed a nondisclosure agreement, so the only detail he would share is: “It’s gonna be crazy.”

Especially since he’s also set to open four additional Skin Design studios by the end of 2021: in the Forum Shops at Caesars Palace in Vegas (opening this month), Nashville, Miami and Whittier.

Cristina, 48, said she’s ready for whatever.

“It’s crazy entertaining,” she says of life with her husband. “Everything is spontaneous. I’m still trying to get used to it.”

She says they sometimes sit by their pool and marvel at how far they’ve come. “I’m very proud, very proud of him,” she says. “He’s worked so hard. I’m getting emotional now. But it’s so nice to see him shine like this.”

Especially since he has brought so many others along for the ride. “For real, he’s helped so many,” says his wife. “He knows how it is to struggle.”

And while he no longer has to worry about money or recognition, there are still struggles. Cristina says when her husband is restless, he goes out to the yard, sits on a blanket in front of their statue of Buddha, lights incense and says prayers.

Or he goes to the studio and tattoos.

“I get lost in it, and then I don’t have to worry about anything else,” Pho says. “I have a big passion for it, more than ever. It’s crazy. I love it too much. I’m scared of not tattooing.”