‘The Nosebleed’ Review: Reconciling the Ghosts in the Attic 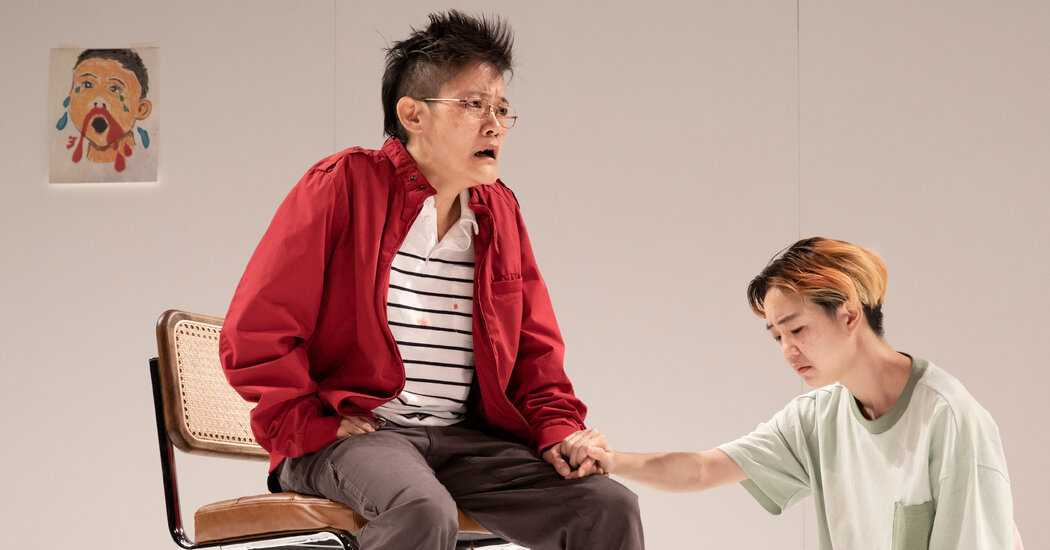 Do artists owe us the truth? Autobiography is inherently subjective, and colored by creative license. But if it holds up a mirror that reflects everyone in some way, doesn’t that make it true?

The playwright and director Aya Ogawa digs so deep into her conscious memory in “The Nosebleed,” which opened Monday at the Claire Tow Theater and had an earlier run last fall at Japan Society, that it’s no wonder someone’s head eventually springs a leak. Conversational, unflinching and delicately layered, Ogawa’s memoir-like excavation tests the boundaries of love and family obligation through intimate confession. But the creator does more than unburden herself of haunting regrets, compelling audiences to detail and release their own. Not everyone will be ready to face what they find.

The lights are still up when Ogawa introduces herself, explaining that “The Nosebleed” began as an exploration of failure. Four actors, standing in the aisles of the theater, step to the front one at a time to briefly recount failures of their own. Earlier that day, Ashil Lee was adjusting her mask when it snapped back into her eyes, momentarily blinding her on the street. Drae Campbell, a dog walker by day, once was so distracted by her phone that a rogue dog defecated inside. Memories of these incidents add another dimension of reality to the ensemble’s unaffected performances, establishing everybody onstage as infallible, imperfect and human.

That gushing schnoz belongs to Ogawa’s 5-year-old son, screaming in his blood-soaked bed on a family trip to Japan, jet-lagged and delirious. Ogawa plays her own son and father onstage, but cedes the role of herself to a quartet of other actors, an apt embodiment of the multiple instincts and voices that animate a single mind. Aya, the character variously played by the others, has been awake streaming bootleg episodes of “The Bachelorette,” in which a contestant’s estrangement from his father compels her to consider her own. She dragged her kids across the world to connect them to their Japanese heritage, but the real quest seems to be finding her own sense of identity.

“Why can’t we just be ‘normal’ Americans?” asks one iteration of Aya (Saori Tsukada).

“Why can’t we find a place that feels like home and just live there?” pleads another (Kaili Y. Turner), exasperated.

This unmoored sense of perpetual in-betweenness will ring familiar to immigrants, their descendants and anyone who has felt caught between cultures. Ogawa’s introspection leads, as so much self-reflection does, back to her parents, and especially to her strained and often wordless relationship with her late father. Finding a sense of home begins by reconciling with the ghosts in the attic.

In concept, “The Nosebleed” might have been cloyingly navel gazing were it not conceived with a generosity of perspective and an unpretentious bid for audience engagement. (If there are perhaps too many requests from onstage for a show of hands over the play’s 70 minutes, the sustained exchange at least feels earned.) Some audience members may not want to be confronted with their own private thoughts. But breathing the same air means participating in “The Nosebleed,” even for those who sit quiet and still.

There’s a blank canvas quality to Ogawa’s crisp, evocative production that similarly feels like a visual invitation for personal association. The white-walled set by Jian Jung gradually recedes, expanding the depth of field. As the action transitions from almost pageant-like into a communal ritual, even casual movement feels lyrical.

If loss is the only true certainty, Ogawa recounts her own in a way that grapples with abiding questions of mortality, forgiveness and self-determination. But as she insists from aching experience, it’s the questions that go unasked that stick with you.