‘The Harder They Fall’ Review: A New Look for the Old West 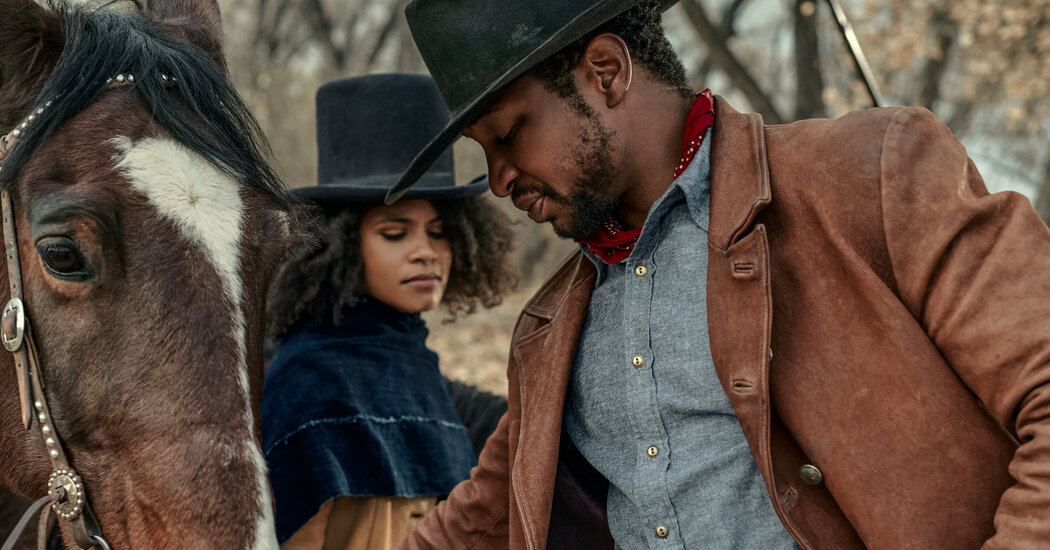 A note at the beginning of “The Harder They Fall” asserts that while the story is fictional, “These. People. Existed.” This isn’t about historical accuracy, or even realism; it’s about genre. The movie, directed by Jeymes Samuel (from a screenplay he wrote with Boaz Yakin), is a high-style pop Western, with geysers of blood, winks of nasty, knowing humor and an eclectic, joyfully anachronistic soundtrack featuring cuts from Jay-Z, Fela Kuti and Nina Simone alongside Samuel’s original score.

The point is that the vivid assortment of gunslingers, chanteuses, saloonkeepers and train-robbers — all of them Black — who ride through picturesque mountain ranges and frontier towns have as authentic a claim on the mythology of the West as their white counterparts. They exist, in other words, as true archetypes in a primal story of revenge, greed, treachery and courage.

Especially revenge. The story begins with a family’s Sunday dinner interrupted by slaughter. Some years later, the young boy whose parents were gunned down in front of him has grown up into an outlaw named Nat Love, played with abundant charm by Jonathan Majors. Nat’s gang — whose most valuable players are a sharpshooter (Edi Gathegi) and a quick-draw specialist (RJ Cyler) — specializes in stealing from other outlaw bands. But that’s just business. The personal concerns that propel Nate and the plot are his love for Stagecoach Mary (Zazie Beetz) and his vendetta against Rufus Buck (Idris Elba).

Mary is a singer and entrepreneur with impressive fighting skills. Rufus resembles a villain out of fantasy or science fiction — a nearly superhuman avatar of evil with grandiose ambitions and a grudge against the universe. And also the charisma of Elba, unmatched at playing bad guys with a touch of sadness to them. Rufus’s crew is a mirror-image of Nate’s, though his empire is more extensive. His sharpshooter, Cherokee Bill (Lakieth Stanfield), is a philosophical sociopath, and his main lieutenant is a ruthless killer named Trudy Smith.

Speaking of charisma: Regina King! From her first appearance — on horseback, in a blazing blue coat with gold buttons to match her stirrups — Trudy spikes the magnetometer, but King is in good company. Just look at the names in the preceding paragraphs. Add Delroy Lindo as a dour U.S. Marshall with complicated allegiances and Danielle Deadwyler as Mary’s pint-size bouncer, who joins up with Nate’s gang and steals a dozen scenes as well as $35,000 from a white-owned bank.

Samuel makes the most of his formidable cast. If anything, he may be overgenerous. The narrative sometimes flags so that everyone can get in a few volleys of the salty, pungent dialogue on the way to the next round of gunplay or fisticuffs. There are imaginative and suspenseful set pieces — Trudy peeling an apple while she tells the captive Mary a story; a bank robbery in a town so white that even the dust on Main Street looks bleached — and plenty of more conventional episodes of shooting and punching.

“The Harder They Fall,” nodding to the traditions of blaxploitation and spaghetti Westerns in the Netflix era, opts for sprawl and impact — the eye-popping cinematography is by Mihai Malaimare Jr. — over restraint and coherence. That’s not such a bad thing, though the story sometimes feels glib as well as messy. A late-breaking revelation that is meant to raise the dramatic and emotional stakes has the opposite effect, and the violence walks the line between stylization and sadism. The bodies pile up at the end, but there are enough people still existing to tease a sequel. No complaints here. That’s part of how the West was won.