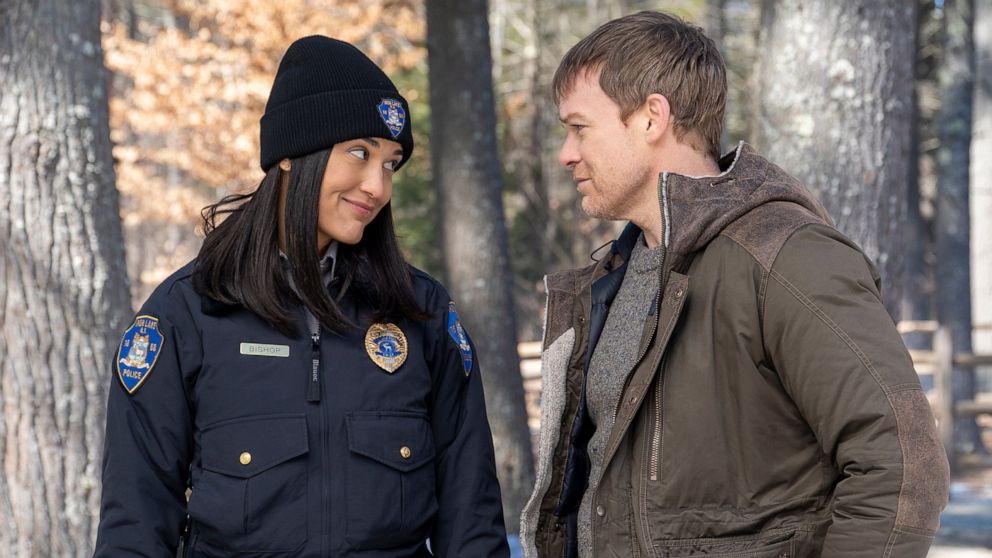 NEW YORK — America’s favorite serial killer is hiding out in upstate New York when we finally catch up to him. The good news is he hasn’t killed anyone in a decade. The bad news is his knife skills are still top-notch.

Michael C. Hall, who plays the troubled hero of the “Dexter” series, steps back into the role with Showtime’s “Dexter: New Blood,” resurrecting one of TV’s darkest characters after an eight-year break and an ending that many found unsatisfying. It starts Sunday.

“The fact that the ending of the series was both open-ended and unsatisfying was part of the motivation to come back and revisit the character with all this time having passed and find out more definitively what happened to him,” says Hall.

The new series isn’t a ninth season, but a departure. Dexter Morgan has abandoned warm and bustling Miami for the fictional small town of Iron Lake, New York. The 10-episode series takes place over 17 days in the icy winter, as blood mixes with snow.

Dexter may have left a trail of corpses in Florida, but in New York, he’s managed to keep his murderous impulse — he calls it his Dark Passenger — in check for 10 years.

There are less than 3,000 residents in his new town and few secrets. He’s got a job at a fish and game outfitter — access to guns and knives — and is even dating the chief of police. They line-dance to a Blondie song at the local bar.

But not all is calm. His dead sister — played by Jennifer Carpenter — haunts Dexter. And the arrival of his long-lost son, Harrison — now a moody teen with lots of questions about why he was abandoned by his dad — forces Dexter out of his comfort zone.

“People are going to die. We know all of that. I wanted to present Michael with a theme, and the theme, which is very dear to me, is fathers and sons,” says showrunner and executive producer Clyde Phillips.

Hall notes that the arrival of Dexter’s son coincides with the bubbling out of his murderous impulses: “A sort of door to his humanity that he’s shut is opened, but you can’t selectively open internal doors. They all open and everything starts to get out.”

In addition to coming to grips with fatherhood, Dexter is both fearful and excited by the notion that his son also might have a Dark Passenger. Is his murderous streak genetic? Or does it have to do with both of them experiencing horrific events when they were infants?

“The lines remain blurred and the blacks and whites turn to gray,” says Hall. “And that’s a part of what the show always does, and where the show always lived, I think.”

While the nature-versus-nature debate takes center stage, the series also delves into opioid abuse, bullying, school shootings and climate change. Throughout is its trademark dark humor. In one scene, Dexter butchers a body while the Christmas song “God Rest Ye Merry Gentlemen” is sung by a choir. “Sorry about the mess,” he tells the victim. “I’m out of practice.”

Eagle-eyed fans will watch as Jack Alcott, who plays Harrison, mimics many of Dexter’s behaviors, like the way he eats his food aggressively or the similar ways they sleep or cross a room.

“It’s all reminiscent,” says Phillips. “But does he have the essence of Dexter? Does he have the Dark Passenger? And that’s the big question for the season.”

“Dexter: New Blood” was shot earlier this year during a 119-day shoot in northern Massachusetts. They began in frigid February when, if the wind changed, the temperature would drop from 20 degrees to 2 degrees.

The cast and crew filmed all the snowy scenes first before spring arrived and had to act like it was cold even when it wasn’t anymore. Phillips laughs about one final scene shot on July 28 when the crew was in shorts and T-shirts and the cast was in overcoats, boots and hats.

“It was a very challenging and very rewarding shoot,” says Phillips. “You stand there in a snowstorm, in knee-deep mud and you look at each other and you say, ‘God, I love what I do for a living!’”

Since the original “Dexter” ended, Hall has been on Broadway in “The Realistic Joneses” and “Hedwig and The Angry Inch” as well as in the film “In the Shadow of the Moon” and making music with his band Princess Goes to the Butterfly Museum. But Dexter still tempts.

“The fact that the show is as broadly appealing as it is would suggest that perhaps we all have some version of a Dark Passenger we contend with,” he says. “Our experience of being human is at least a part about managing our darker impulses.”

Mark Kennedy is at http://twitter.com/KennedyTwits