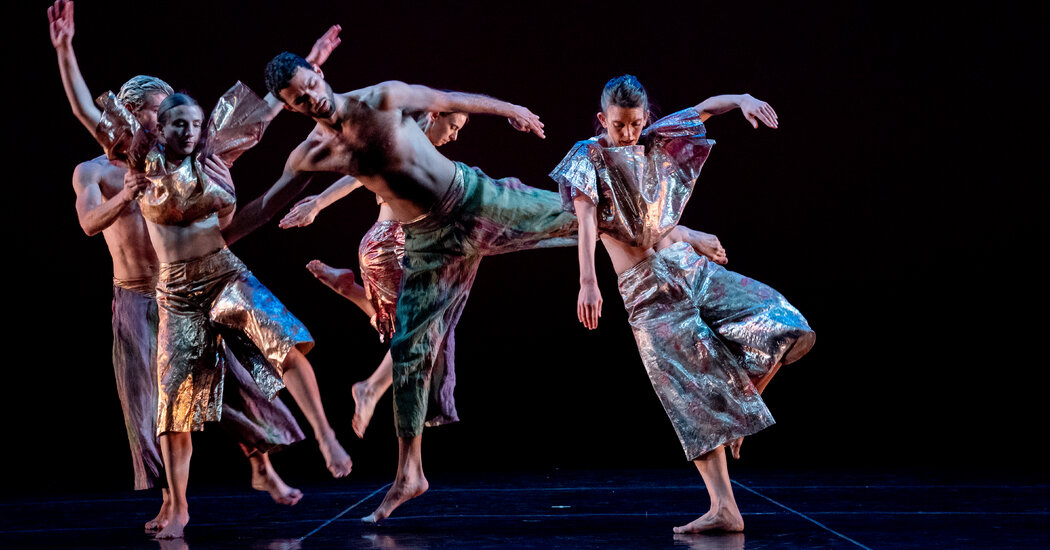 The dancer Cecily Campbell is alone onstage when you begin to hear it: the faint sound of a marching band floating through the silence. Is it the ordinary commotion of New York City, on the street outside the theater, or part of the dance?

Over her 40-year career, the choreographer Trisha Brown produced a vast body of work full of mischief, mystery and surprise. Her musical concept for “Foray Forêt” — to send a brass band roving beyond the stage — ranks among her slyest and most delightful choices, epitomizing how she could wring layers of meaning from a seemingly simple idea.

On Tuesday at the Joyce Theater, the Trisha Brown Dance Company, in a pandemic-delayed celebration of its 50th anniversary, brought back that 1990 gem and “Astral Converted” (1991), two works that Brown created sequentially with the artist Robert Rauschenberg, her collaborator and friend. More than 30 years later, both hold up as quietly dazzling examples of boundless, intricate movement invention inside luminous visual and sonic landscapes.

With the associate artistic director Carolyn Lucas at the helm, the current company includes dancers both well-versed in Brown’s oeuvre and much newer to it. While that variation showed at times, they collectively rose to the convoluted challenges of this program.

One charm of “Foray” is the contrast between its supple, understated movement — performed by a cast of nine in Rauschenberg’s airy, metallic costumes — and the grander images of ritual and revelry called up by the sound of the band. Brown was working with a vocabulary that she called “delicate aberrations,” and small-scale gestures repeatedly catch the eye, like palms carving the air in a scalloping motion, or a forearm folding into a rib.

But even the more extravagant movements — sudden daring leaps or tips off-center — unspool with the ease and inevitability for which Brown’s work is known, one action effortlessly igniting the next. In a duet for Campbell and Stuart Shugg, two of the most experienced and compelling company members, she bumps him with her hip, then hooks a foot around his ankle, the kind of rapid-fire disruption and restoration of balance that happens again and again.

Barely audible at first, the Jina Brass Band (directed by Sunny Jain) grows louder as it migrates around the edges of the theater, still out of sight. The faraway music makes the dance feel like a secret that we’re privy to, as if we had slipped behind the scenes of a carnivalesque event. When the five musicians finally appear, just moments before the end, they’re as unintrusive as the rest of the dance, coming and going like a light summer rain.

In “Astral Converted” (an evolution of Brown’s earlier “Astral Convertible”), nine dancers share the stage with a collection of Rauschenberg’s skeletal aluminum towers. These light-emitting structures respond to motion sensors on the dancers’ costumes: silver unitards, also by Rauschenberg, with shimmery webbing between the legs for the women. That curious detail, which causes the women to look more constrained, is the only part of this work that hasn’t aged well.

Brown created “Astral Converted” for the outdoor stage on the National Mall in Washington, contemplating what an aerial view might look like. The result, to a spare John Cage score, pairs slinky, sculptural floor-bound movement — the dancers could be deep-sea creatures — with high-velocity standing phrases, which at times make dexterous use of two brooms as dance partners. On Tuesday it was danced with what felt like a focused reverence for Brown, who died in 2017. If anything was missing, it was the abandon that can get lost amid such careful reconstruction.

Through May 29 at the Joyce Theater, joyce.org.