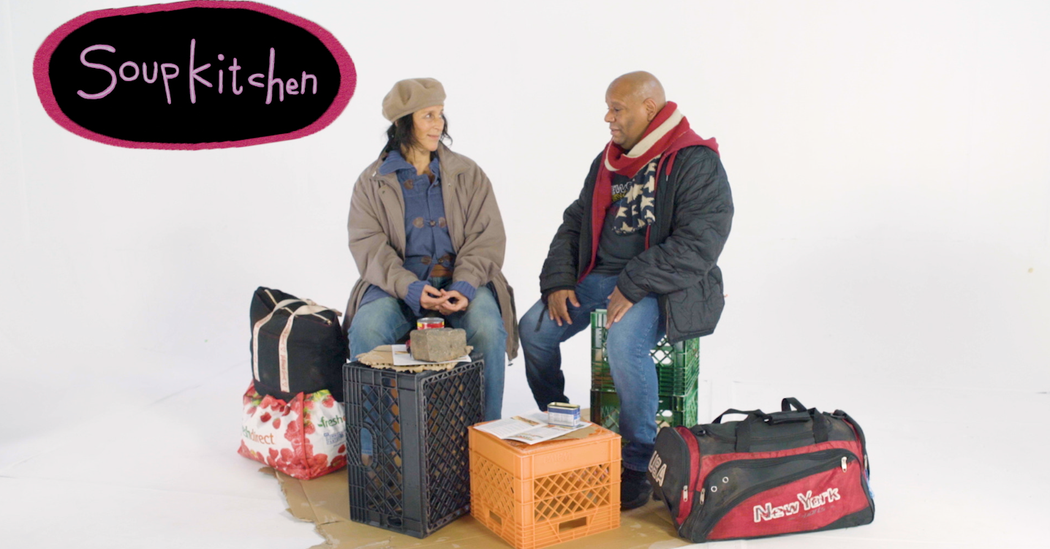 In June, after a series of court battles, 60-some men were moved out of the Lucerne, an Upper West Side hotel that had served as a shelter during the first year of the pandemic. Their presence had divided the neighborhood, with some residents starting a Facebook group to complain about how the men had decreased their quality of life, even as there was no discernible uptick in the local crime rate.

One of the Lucerne’s residents, Shams DaBaron, who first became experienced homelessness as a child, found himself representing his fellows. At a rally in September 2020, he spoke up, saying: “Despite our being homeless we can do the right thing. Don’t criminalize us, don’t dehumanize us, let us all come together with both sides and make this thing work.”

These days DaBaron has found a different way to get people to come together. A virtual one. He is a star of “Addressless,” a theater and video game hybrid presented by Rattlestick Playwrights Theater. DaBaron plays Wallace, a single father in the shelter system. (DaBaron is housed now, but the character’s experiences mirror his own.) The other homeless characters are Joey Auzenne’s Louis, a veteran with untreated back problems; and Bianca Norwood’s Josie, a queer teen runaway. The “games master” is Hope Beaver, a licensed social worker at a family shelter on the Lower East Side.

A creation of Martin Boross, a Budapest-based director, and the playwright Jonathan Payne, “Addressless” has empathy in mind. Its subtitle is “A Walk in Our Shoes.” By splitting its audience into three groups, each assigned to a particular character, it asks us to participate in that character’s life choices. As often as not, all of the choices on offer are bad ones. The goal is to leave your character with enough money and enough health points to enter a housing lottery. Staged via Zoom, the show alternates live performances and breakout-room chats with amateurish filmed sequences.

There’s an obvious tension between wanting to excite empathy for the homeless and making a game of the situation, reducing a person’s life to “health points” and a cash amount. (A subtler tension: participating in a show about the housing crisis from the comfort of your own home.) “Addressless” takes pains to show that people experiencing homelessness are more than just numbers on a caseworker’s docket. Then the show shrinks them down to numbers anyway.

Winning becomes paramount, the unhoused person’s experience less so. Auzenne and Norwood are trained actors and able to disappear into character. That DaBaron and Beaver are not only intensifies this friction between entertainment and education.

The game often doesn’t play fair. (Then again, a state that has enshrined the right to shelter into law and yet doesn’t provide it isn’t playing fair either.) More irksome, “Addressless” doesn’t follow through on its choose-you-own-adventure premise. In the show’s first section, participants can choose where characters sleep — on the streets, in a shelter, on a friend’s couch. After that, the characters choose for themselves. Not always wisely. But there’s poignancy in some of the dilemmas, like whether Louis, who is injured on the job during a trainee period, should go back to work, risking his health, or take time off to heal, risking his continued employment.

For many housed New Yorkers, day-to-day interactions with homeless people will be defined by arm’s-length benevolence (donating to a food or coat drive) or inconvenience (panhandlers on the subway). Even if “Addressless” sometimes sacrifices deep identification to its game structure, it wants us to do better, and the show’s chat function provides a list of resources to enable that. Some participants seemed primed to use them.

As a Sunday evening show concluded, one woman unmuted herself. “My heart just breaks for everyone who experiences this,” she said.

Baby Queen: ‘Courtney Love said not to call myself a pop star; rock stars get away with more and stick around longer’