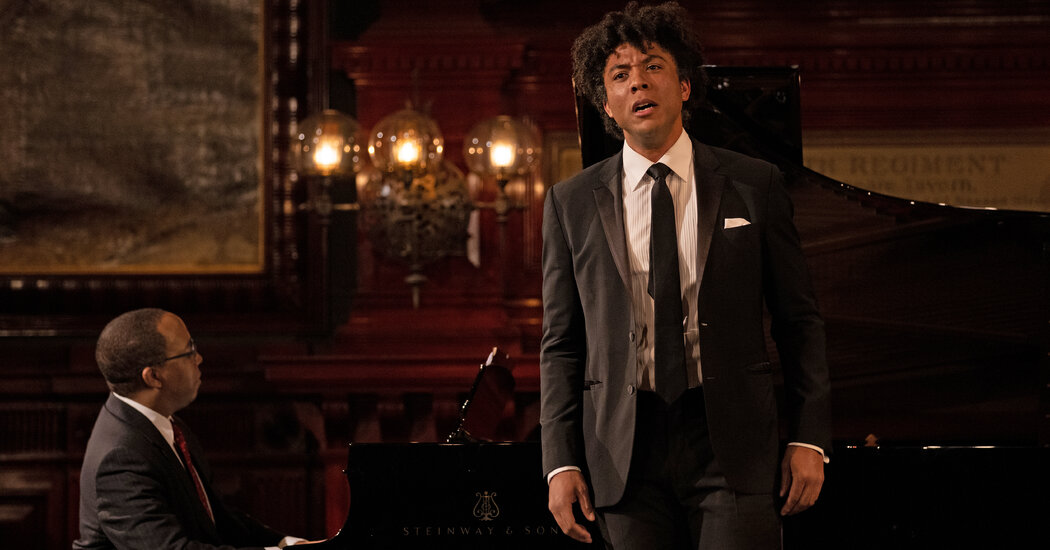 In a program of songs highlighting a broad range of American compositional voices — Black, gay, female, old, new — the baritone Justin Austin showed off a mighty lyric voice with dramatic flair at the Park Avenue Armory in Manhattan on Tuesday evening.

Austin’s tone is deep and earthy, with a firmly stitched timbre that withstands some high-octane singing. At the Armory, he found operatic climaxes in most songs — his high notes were strong, shattering, indefatigable. And as he warmed up, his breathy soft singing began to convey feeling too, though there was little color in his treatment of texts. (Suffering from allergies, he turned upstage to blow his nose between most songs.)

This has been a busy time in New York for Austin. Earlier this year, he sang the lead role of the rough laborer George in Ricky Ian Gordon’s opera “Intimate Apparel” at the Mitzi E. Newhouse Theater, where his big, hard-edge sound overwhelmed the microphone he didn’t need. In May, he made his Metropolitan Opera debut as Marcellus in Brett Dean’s “Hamlet,” projecting into that capacious house with youthful vigor.

But in the intimate recital setting of the Board of Officers Room at the Armory, his built-for-power voice tended to run roughshod over poetry, as in the opening group of nine Gordon settings of poems by Langston Hughes. Gordon’s rushing, exuberant melodies suit a supple voice that soars, but Austin’s swings like a hammer. At times it worked: He rode a path to glory in the punishing conclusion of “Harlem Night Song,” with its ecstatic series of high notes.

He connected more profoundly with Hughes cycles by the Black composers Margaret Bonds (“Three Dream Portraits”) and Robert Owens (“Mortal Storm”). Bonds’s “Minstrel Man,” about a performer whose humanity is invisible to his audience, stirred a wry, subversive spirit in Austin. In “Dream Variation,” his voice flowed naturally, and “I, Too” was defiant — the sound of someone no longer willing to wait for his moment in the sun when he has the strength to seize it for himself.

There are times when Owens’s “Mortal Storm,” which featured the evening’s most pessimistic poems, sounds like a dense piano reduction of an opera score. “Jaime” is a 40-second tempest, and “Faithful One” is thick with bass chords. The pounding triplets of “Genius Child” recall Schubert’s “Erlkönig,” both of them harrowing fantasies of a murdered boy. It’s not a cycle for the faint of voice, and Austin excelled in it, even finding rhythmic playfulness and a touch of sensual romance. “Genius Child” ended with a devil’s ride into the bracing line “Kill him — and let his soul run wild!”

Then, in a breath-catching turn, came Aaron Copland’s lullaby to a crying baby, “The Little Horses,” sung in hushed, consoling tones. Its simple starlight inspired the prettiest playing of the night from the pianist Howard Watkins, who often made the program’s wide-ranging styles sound homogeneous and unsubtle.

Toward the end, Austin sang spirituals and gospel with an unforced expressivity that sustained each piece’s mood. His single encore, “I Want Jesus to Walk With Me,” was delivered a cappella. Without a piano at his back, he rose to the occasion. There were highs and lows, thunder and cries — and beauty, too.