Neil Maskell: ‘Netflix and Amazon are chewing everything up like Pac-Man’ 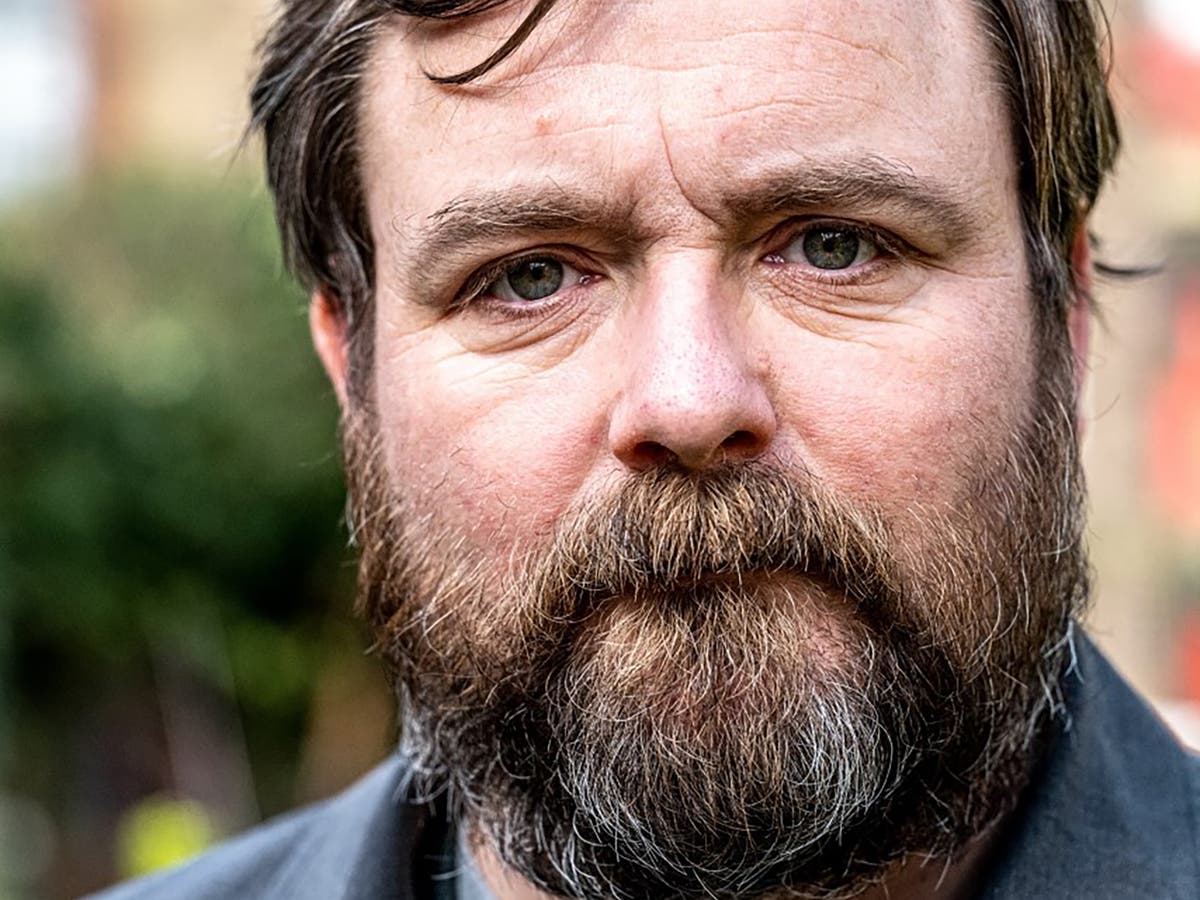 Neil Maskell gives good violence. He’s shot dead a class of schoolchildren in the Channel 4 series Utopia, executed cultists and sadistic priests in Ben Wheatley’s Kill List and stabbed, maimed and claw-hammered his way through British film and television for almost three decades. Today, over the phone while Maskell is running errands in Islington, the tables have finally been turned. “I’ve just been brutalised by a dental hygienist,” he says, his accent a characterful, south London whirr. Frankly, it’s only fair.

Maskell was born with a face signalling danger. Which isn’t to say that the 44-year-old looks like a wrong ’un. In fact, his face is sweetly cherubic, with trusting eyes and a wide smile whenever he chooses to share it. But it’s a face that can also be distorted into something inscrutable, masking a darkness as deep as it is chilling. A few years ago, in response to Maskell’s role as a baby-faced hitman in Utopia, the food critic Grace Dent tweeted that he had begun to haunt her dreams. “He’s a f***ing lunatic,” she wrote. “I’m so in love.”

“I suppose I’ve always known I could appear scary should I wish to,” Maskell says. He was being cast as “baddies” in school plays long before he’d acted professionally. “I became aware quite young that I could seem intimidating if I turn the volume up a little bit and use my physical characteristics. But anyone who knows me personally would say that I’m a long way away from that. I’m a pretty friendly bloke, I think!”

Do people seem frightened if they see him on the street, though? “A bit, but that’s perfect for me,” he says, “because I’m not someone who particularly wants to be pestered when I’m out and about.” He lets out a big, wheezy cackle. “I’m glad people don’t know that I’m as approachable as I am. That’s been a boon rather than a bad thing.”

It’s a credit to Maskell’s talent that the character he plays in his new film, Bull, is frightening yet oddly sympathetic. Much like Kill List – in which he played a former soldier working as a contract killer – Bull is set in a world of neat English lawns, new-town banalities and surreal hyper-violence. Maskell plays the title character, a bruising rent-a-fist for a gangster named Norm (David Hayman). Despite being married to Norm’s addict daughter Gemma (Lois Brabin-Platt), Bull still finds himself left to perish in a camper van following a custody battle for the pair’s son. A decade later – though the film’s timeline is ambiguously cut up by director Paul Andrew Williams – Bull returns from parts unknown with his mind on vengeance. Fingers are chopped off, brains are splattered across walls, and all kinds of nightmarish hellfire unfurls. It’s essentially EastEnders meets Oldboy.

But beyond all the gnarly bloodshed he inflicts on his former allies, Bull is easy to root for. Maskell says he felt that way, too. “What Paul did is create a kind of lawless place, with people existing in it that are almost outside of society,” he explains. “Bull is a product of that, a victim. I feel like he’s very much been shaped by it, and whatever talents, abilities and potential he has have been curtailed or muted by his environment. That’s where that anger comes from.”

Maskell’s own background is nothing like Bull’s, but he cops to the importance of being told – at an impressionable age – that you can be anything you want to be. Maskell was born in Barnehurst in Bexleyheath in 1976. School was uneventful, but every Friday evening he’d rush over on the tube to Angel in Islington, where for 50p a week he could act and improvise and express himself at the Anna Scher Theatre. The drama club – located in an old church hall – has been the London training ground for a staggering number of often working-class actors through the decades, from Kathy Burke and Daniel Kaluuya to Phil Daniels and Naomie Harris. “It’s really hard to express just how special it was,” Maskell says. “The older I get, the more important it becomes to me, and the more I realise how much it gave me in opportunity, and in forging my character.”

Who was the Neil Maskell that went into that church hall, I ask, versus the one that came out of it? “I feel like the kid who went in there had to be a bit closed off,” he says. “I had to protect myself, and when I was there I didn’t feel that so much. It was somewhere I could open up and be creative. I could be vulnerable and emotional in a way that I wasn’t able to amongst the young people that weren’t there with me. I went in there as someone who thought I might get to do some plays, and came out of there believing it could be a career. That maybe you don’t have to go to Rada. That your mum and dad didn’t have to pay for you to go to university for you to be a professional actor, because there were other people who went to Anna’s who’d done it, so why couldn’t I? You felt like you had a chance.”

And then, to his shock, Maskell bursts into tears. “It genuinely overwhelms me,” he says, his voice quivering. He apologises. “Oh dear, well I didn’t expect that.” He says it’s because he’s walking around Islington, the place it all began for him. I ask if he’s in a reflective mood. “Well, I didn’t know that until I got on the phone with you, mate! But, Christ, do I feel grateful to still be doing this. When I was in my late teens and early twenties, there was a real snobbishness that unless you’d been to the f***ing Guildhall, you shouldn’t get an opportunity. Unless your mum does the job or your dad’s a patron of one of these theatres or something, you wouldn’t necessarily get the opportunities you should have got. I know so many actors who went by the wayside and didn’t end up doing it for a living and it’s been good fortune that’s made me do that. It certainly hasn’t been any more hard work than any of them were willing to put in.”

It was at Anna Scher that Maskell auditioned for Gary Oldman, who was scouting London drama clubs to fill roles in Nil by Mouth, his 1997 directorial debut. Maskell had only a couple of lines – playing a laundrette-smashing tearaway – but it was an auspicious debut. In the aftermath, he would be cast in projects that always seemed to reflect the shifting whims of British storytelling: laddish early-Noughties flicks that often starred Danny Dyer (It’s All Gone Pete Tong, Fat Slags, The Football Factory); indefinable low-budget indies destined for cult status (Kill List, Rise of the Footsoldier, Happy New Year Colin Burstead); expensive TV co-productions between the UK and US (Humans, Sex Education). He misses elements of the film industry that existed when he first came into it.

“For a short while there was this burst of creativity and stuff being made because of access to new [technology],” he says. “But then here comes America and Netflix and Amazon chewing everything up like Pac-Man. [Today] it’s quite difficult to get British films made, because we share the common language of America and audiences will go and see franchise movies over anything else. It’s a golden period in television, for actors and for crews, but I do worry that film is falling away in this country.”

How does he reckon we could fix it? “I think that we should overthrow hyper-capitalism and give the workers the means of production!” he cries, before breaking into giggles. “I don’t have a more serious answer to it. We’re probably like every other element of society going to hell in a handcart, but fingers crossed something changes at some point. Young people seem to be manning the barricades. I do have a little bit of hope, creatively as well as politically. They seem to be engaged and involved in a way that maybe my generation wasn’t.”

Before we hang up, I ask if the catastrophic Basic Instinct 2 – in which he played a Met officer who interrogates Sharon Stone, sans leg-crossing this time around – was as much of a disaster for him as it was for seemingly everyone else involved with it. “It was amazing!” he says. “Me, a kid from Barnehurst, in f***ing Basic Instinct? Who’d have thought that would happen?” It didn’t put him off big American movies, either. He had a little part in Guy Ritchie’s King Arthur movie a few years ago, and even worked with Tom Cruise on his reboot of The Mummy, even though his scenes were cut from the final edit.

“The one thing that’s strange about working with Tom Cruise is he’s actually a nice fella,” Maskell jokes. “They were sorting out a shot and he walked over to me and said, ‘I just want to say I’ve been watching a load of your stuff and I’m a really big fan.’ And I went, ‘Yes! And me of you!’ But what do you say? When you’re talking to Tom Cruise, and the whole world is a fan of his? It was quite comical… but he makes a fuss of you, which is nice.”

Our time is up. I apologise for making him cry, or for potentially ruining his reputation as a hard man you should cross the road to avoid. “I don’t mind at all,” he says. “I’m quick to laugh, I’m quick to tears, I’m quick to anger. I’ve got quite a mercurial personality in general.”

‘Bull’ is in cinemas from 5 November