‘Modern Swimwear’ Review: The Designer and the Murderer 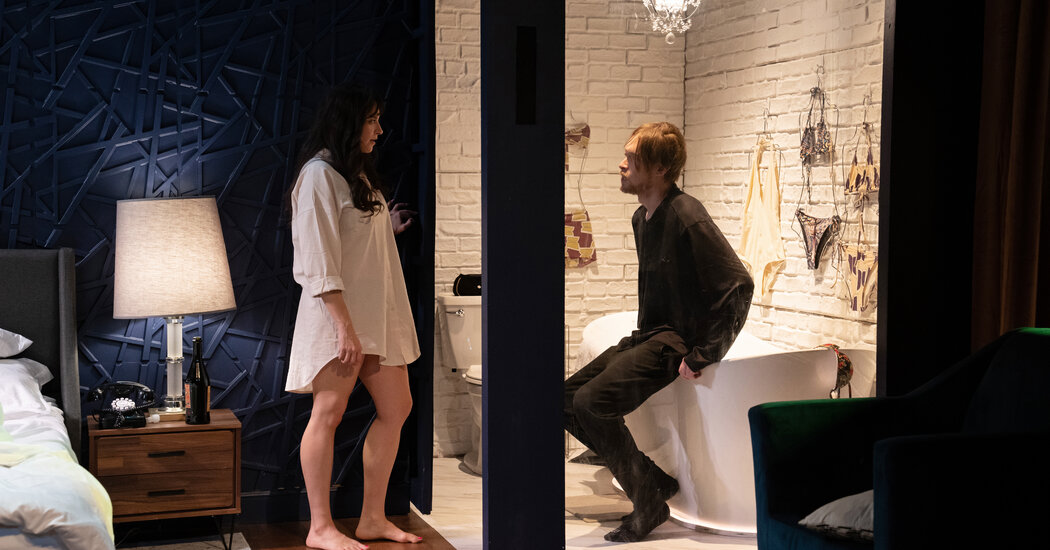 The murder of the swimsuit designer Sylvie Cachay in 2010 cut short the life of a promising fashion star at the young age of 33. “Modern Swimwear,” a new play by Caitlin Saylor Stephens, imagines the events of her final night. A one-act, (almost) two-hander now in performance at the Tank, it features a strong central performance from Fig Chilcott, but is incurious about its subject to the point of feeling arbitrary, with the choice to turn this particular woman’s tragic end into dramatic fodder unjustified.

At a glance, it’s an almost ideal setup: one night, one hotel room, one failing relationship — with Nick Brooks (Frank Zwally), a trust fund baby, then 24, with whom Cachay had a stormy monthslong affair. The two checked into the Meatpacking District’s Soho House late one December night after the candles he’d lit accidentally set her apartment on fire. Hours later, her body was found strangled and drowned in the bathtub.

Anyone unfamiliar with this story would most likely be shocked and confused when Nick, who is otherwise written and performed as a lazy, garden-variety 20-something narcissist, attacks the bright and bubbly Sylvie in the play’s final minutes. Though Stephens offers some compelling insights into the crossfire of a doomed coupling, her characters are neither sturdy enough for an ordinary relationship drama to stand on its own, nor specific enough to be tied to real events. Their arguments about wandering eyes and miscommunication are relatable to a fault, yet their end is anything but, and arrives too abruptly.

The couple seem at odds on everything from professional ambitions (he has none) to sex; not only is Nick uninterested in the intimacy of “making love” (it’s more of a four-letter word for him), but he is tormented by sensory hallucinations whenever the two come in contact (an invention of Stephens’s). Spookily rendered through Marcelo Añez’s staticky sound design and the way Sarah Johnston’s lights flicker across Christopher and Justin Swader’s true-to-life set, these manifest mainly as intrusive snippets of a song his songwriter father once wrote. But the plot avoids a real-life detail that might have brought Nick’s fraught relationship with women into higher relief: The elder Brooks, Joseph, was charged with multiple counts of sexual assault in 2009.

The play does not explore these histories, nor does it spend much time investigating Cachay’s passion for swimwear, aside from one very effective, if simple, sequence. Locked in the bathroom, Sylvie hypes herself up ahead of a meeting with investors scheduled for the next day, speaking poetically and convincingly about the value of style and vision, fashion’s triumph over nakedness. When she then tries to spice things up with Nick by modeling her newest line, he shrugs and mumbles that there should be more nude beaches.

It’s a subtly gutting moment, made especially persuasive by the warmth radiating from Chilcott. Right from the opening scene, the actor’s liveliness embodies someone who hasn’t entirely dimmed her light for an unresponsive boyfriend — though Stephens frustratingly leaves unsaid any reason that Sylvie should stick around. As a scene partner, Zwally isn’t so much one-note as he is perhaps misguided by Meghan Finn, whose direction matches the play’s uneasy mix of the momentous and the routine.

Chad Pierre Vann appears briefly as a room-service waiter, threatening to steal the show with an entirely out-of-place flash of comic relief. It’s hard to wish away such a deftly farcical performance, but even tougher to argue for its inclusion. As the couple’s only onstage witness, his reappearance to discover Sylvie’s body is inevitable and unfortunately clumsy. Like Stephens’s play, it’s not exploitative — there is palpable care for the fallen woman — but feels unwarranted and unearned.