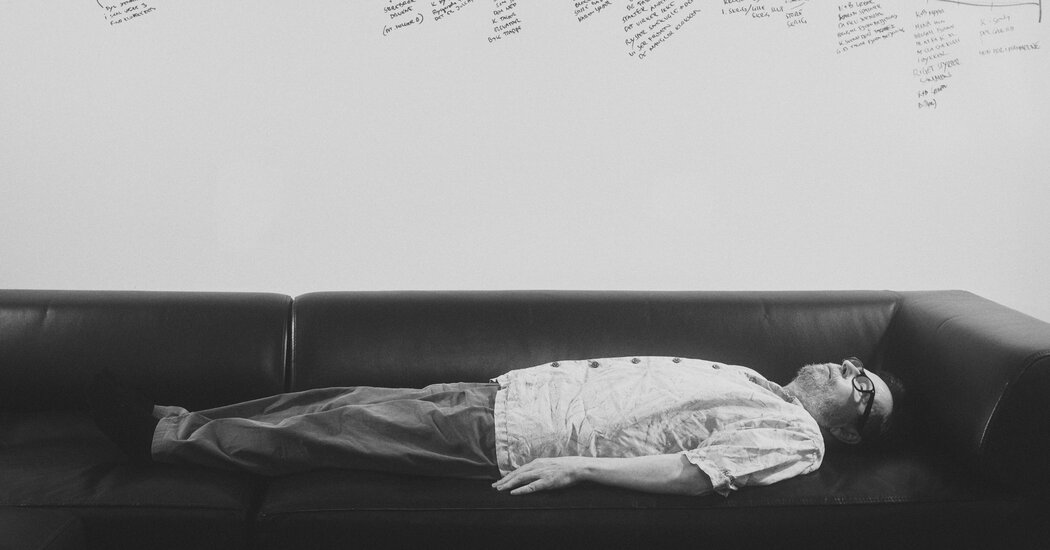 In the first two seasons of Lars von Trier’s haunted-hospital drama “The Kingdom,” hailed since the 1990s as Denmark’s “Twin Peaks,” von Trier appears in a tuxedo at the end of each episode to offer a droll recap and wish viewers a pleasant evening. With an impish grin and an appeal to “take the good with the evil,” he ends with a devil-horn salute.

But in the belated five-part conclusion, “The Kingdom Exodus,” which begins streaming Sunday on Mubi, von Trier delivers his closing remarks from behind a curtain.

“I’ve retired a bit physically,” he says, his shoes peeking out from under the curtain, citing “vanity” as the reason. “The 24 years that have passed since the old episodes have left their mark, and I can’t compete with the unbearably cocky young Lars von Trier.”

It is, on one level, a gag typical of von Trier, 66, a filmmaker who never has never taken himself too seriously, sometimes to a fault, even as he has created some of the most ferociously imaginative, rule-bending and at times infuriating movies of the last 30 years, including “Breaking the Waves,” “Dancer in the Dark” and “Dogville.”

But the comment is also a reflection of his current state. In August, von Trier’s production company, Zentropa, announced that he had Parkinson’s disease. Weeks later, a visibly trembling von Trier gave a surprise, prerecorded introduction at the premiere of “The Kingdom Exodus” at the Venice Film Festival, later telling Variety that he intended to take a break from filmmaking. In a video call from his home in Copenhagen this month, he warned he would not be able to speak as precisely as he wanted.

“That took at least a quarter of my brain, in the sense that I can’t find the words,” he said of his illness, “and in English it’s twice as difficult.” Or as he said in a second interview later in the week, his dark, self-deprecating humor coming through: “I would like to say to you that I am not as stupid as you think I am right now.”

Von Trier was joking, as he does almost compulsively in conversation, his sense of humor no less mordant or provocative now than it was when the first two seasons of “Kingdom” aired on Danish television, in 1994 and 1997. A combination of horror and satire set at the Rigshospitalet in Copenhagen, the series was an early international breakthrough for von Trier, and finishing it completes a circle of sorts, one with origins dating to his 1987 feature “Epidemic,” which used the hospital as a location.

Still, as he considers what’s next, he seemed more circumspect than the von Trier who raised eyebrows at the Cannes Film Festival in 2009 when he declared, “I am the best director in the world.” Or who, two years later at the same festival, expressed sympathy for Hitler and delivered the line “OK, I’m a Nazi” — another joke, but one that got him temporarily barred from Cannes. (Unprompted, he expressed regret over the over the 2011 incident when we spoke, referring to it as “the catastrophe.”)

The actor Willem Dafoe, who began working with von Trier on “Manderlay” (2005) and plays the satanic Grand Duc in “Exodus,” spoke of two qualities that keep drawing him back to von Trier — the director’s ability to communicate without speaking and his habit of speaking too much.

“He’s well known for not having a filter, and sometimes it gets him into trouble because he goes to places socially that may be difficult to accept,” Dafoe said. “But creatively, that kind of looseness, that kind of allows him to contemplate the unthinkable.”

At Venice this year, “Exodus” was received as a return to form, but the fact that it was even completed was improbable. The franchise is a ghost story in more ways than one.

The series was always meant to have a third, final season. But after Season 2, the principal actors started to die. Ernst-Hugo Jaregard, who played the imperious, dyspeptic Swedish physician Stig Helmer, died in 1998. Kirsten Rolffes, who played the malingering spiritualist Mrs. Drusse, died in 2000. After a while, von Trier said, he gave up.

“But then four years ago I had a mental situation that was not good,” he said, “and I knew the only thing that could help was to work.” “Exodus” was simply the easiest thing to do.

Von Trier, who shares screenwriting credit across the series with his longtime collaborator Niels Vorsel, wrote much more slowly than he usually did. (“Dogville,” he said, was written in 10 days.) His ambition was to give the series as much of an ending as possible. This season is also, he thinks, the funniest of the three.

Unlike the first two installments, which were mainly studio productions, “Exodus” was filmed principally at the real-life Rigshospitalet, during Covid, no less. The story brings back some original characters in supporting roles while presenting substitutes for the departed leads.

In place of Stig Helmer, “Exodus” offers Stig Helmer Jr. (Mikael Persbrandt), who takes a job at the hospital to experience living in the nation that drove his father mad. (Like his father, he constantly carps about Danish customs.) In place of Mrs. Drusse, the show has Karen (Bodil Jorgensen), a sleepwalker who, in the first of many meta touches, is introduced watching the closing credits of Season 2’s final episode and complaining, “That’s no ending.”

The shoot was difficult for von Trier, who remembered receiving his diagnosis during the course of the production.

“I have never felt so bad on a shoot before,” he said. “But on the other hand, I enjoyed especially the work with the actors.”

The feeling was mutual for Jorgensen, who had starred in von Trier’s “The Idiots,” from 1998. On a set in 2014, she was run over by a tractor, and her lungs collapsed. Her road to recovery was long. The shared experience of having overcome physical obstacles had bonded her and her director, she said. “I survived, and Lars survived.”

She added: “What I experienced was that every day, he got more and more interested in the telling of the story.”

Von Trier said he has always considered “The Kingdom” a “left-hand work,” a money job that permits a certain kind of freedom. He likes that sort of abandon, even if he cares more for his feature films. “The good side is of course that you take any idea and say it’s good enough and put it in,” he said.

Still, one subplot in “Exodus” plays with fire, even for a director inclined toward controversy. In it, Stig Jr., who is working to make the hospital more inclusive (new rules on pronouns abound), tries to initiate a romance with a colleague (Tuva Novotny) by asking her consent by email. She winds up running to a lawyer (Alexander Skarsgard), who somehow represents them both.

The references to sexual harassment risk appearing pointed: In 2017, Bjork, who starred in “Dancer in the Dark,” accused a “Danish director” who was widely understood to be von Trier of unwanted touches and sexual advances. That same year, Peter Aalbaek Jensen, who co-founded Zentropa, was accused of sexual harassment by multiple women at the company, to which he later responded, in The Hollywood Reporter, “I’ll stop slapping asses.”

Von Trier said that the subplot of “Exodus” was inspired by broader cultural discussions in Denmark. He has consistently denied Bjork’s accusations. (“I don’t have to defend,” he said during our interview. “I have nothing to defend.”)

Whatever ways “Exodus” dares being called objectionable, the response so far has been enthusiastic. Alberto Barbera, the director of the Venice Film Festival, suggested that the audience’s familiarity with the original — and with von Trier’s prankishness — played a role in its positive reception.

As “often happens with cult works,” he wrote in an email, there was “lively participation accompanied with a mixture of spontaneous applause, laughs and — probably for many — moments of nostalgia for being taken back.”

To the extent that he ever did, von Trier no longer considers himself the best director in the world. “It’s not like running 100 meters, and then the stopwatch will tell you if you won,” he said. “You can’t compare art, and you can’t compare films.”

But there are some constants. He still hasn’t been to the United States. He still doesn’t fly. (If he allowed himself one flight? “To Iceland, to meet Bjork in person and really talk this through.”) He is still searching for projects now that “Kingdom” is completed, but he said his health would need to improve before he started something new.

In the meantime, he has his routines. Our first conversation took place the day of the Danish general election, and he had just voted — as usual, he said, “for the most-left party I could find.” (In case anyone still wondered whether he is a Nazi.) Jorgensen, who lives near von Trier, mentioned taking regular walks with him, saying it was good for his Parkinson’s.

Then there is one project that he is already shooting — a video series with the working title “Report From Lars.” He wants it to be available free, perhaps on the internet.

In each chapter, von Trier will share insights that he has learned about filmmaking.

“Then people who hate my films can do the opposite,” he said.

TikTok Is Filled With Sped-Up Remixes. Two Norwegians Pioneered Them.

Arrests made in fatal shooting of Migos rapper Takeoff