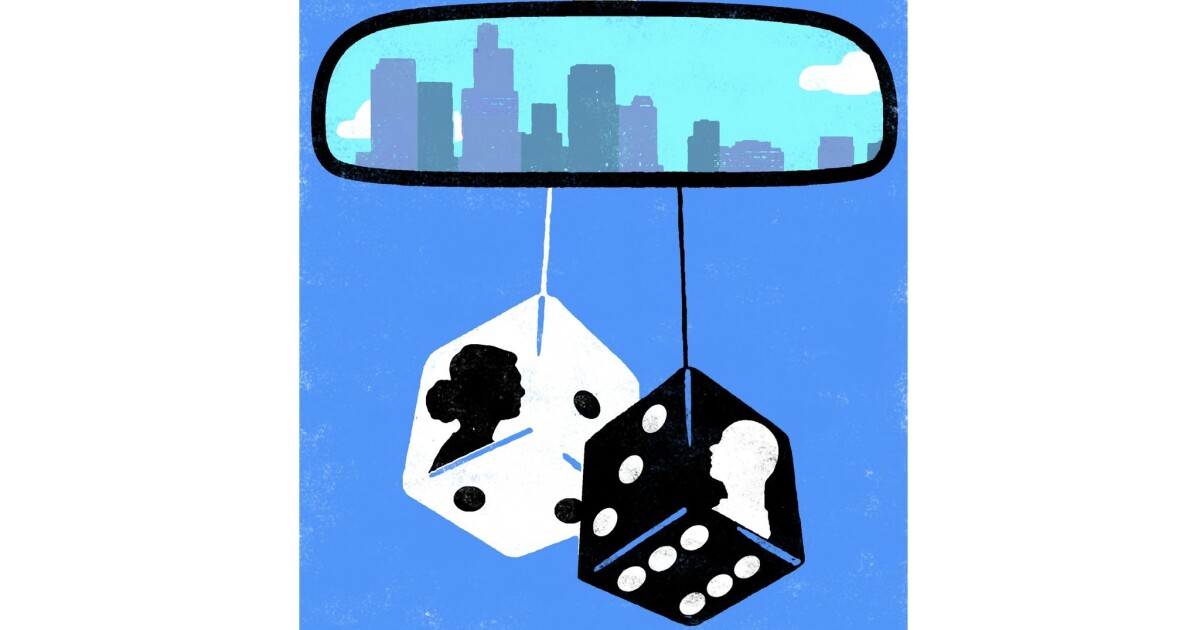 “That guy over there.”

I was talking to my friend, Kim, as we sipped cocktails at a bar in Hollywood. She followed my gaze. “The … bald … white guy?” she asked, her face scrunched up in disbelief. I nodded. She raised an eyebrow and slurped on her vodka cranberry.

Some background might be helpful here. I’m black and my friend Kim is white, as was the guy in question. He also shaved his head and, apparently, that threw my friend for a loop. I knew why.

Since I’d known her I’d mostly dated black guys. The real estate agent I’d met at the LACMA summer jazz series. The actor who’d given me his head shot as soon as he learned I was a TV writer. The musician who serenaded me at the Dresden between Marty and Elayne’s sets. All black. And the one or two white guys in the mix had hair.

Are you a veteran of L.A.’s current dating scene? We want to publish your story

Two weeks later, I climbed in the passenger seat of the bald white guy’s truck when he picked me up from my apartment in Miracle Mile. Hmm … he drove a pickup truck. And I knew from talking to him on the phone that he was from the South.

I smiled as he told me he’d made a reservation at Ammo. So far, so good. I liked that place. As we drove along, I surreptitiously glanced at him — he was wearing a nice suit, having come straight from his office to get me.

He had mentioned he was a lawyer, so I’d already mentally checked the box for gainfully employed. But something else was on my mind.

Here’s the truth: Race is still a thing.

No matter how advanced a society we think we are, the idea that we’re post-racial is laughable. Over the years working in numerous writers rooms as the only black writer, I’d become a pro at deciphering comments white guys made:

Translation: I’d never do it but I think Halle Berry’s pretty.

I have a lot of friends in interracial relationships.

Translation: Some of my friends date Asian women.

Translation: My kid listens to hip-hop.

This guy was from Georgia. “The heart of Klan activity,” one of my friends felt compelled to tell me. To be fair, I’m from the South. Raised in Florida, I know about chewing tobacco, gator farms, 2 Live Crew, y’all, and the Confederate flag. For that reason, I started getting nervous about this guy.

What if I were part of some Dixieland fantasy of his? After we were seated I asked him how many black girls he’d dated. “Why?” he asked. “Because maybe black girls are your thing,” I said. “I don’t want to be part of your chocolate fantasy.”

We continued dating, and soon we were exclusive. This didn’t come without challenges.

Whenever we went somewhere with a lot of black people in attendance, I got the side eye from some of them. I understood. My dating outside the race was seen as a betrayal. Their thought bubble hovered, clear as day: “After everything they’ve done to us, you’re going to date one of them?”

And some days, it was tough because I felt guilty for not completing the picture of the strong black couple. Another time, my boyfriend got a call from his ex-girlfriend. “I heard you’re dating a black girl.” Yep. Word had spread through the Caucasian grapevine.

I was working on a sitcom at the time. When I told the writers on the show I was dating a white guy from the South who drove a pickup truck, I could tell they were skeptical.

The kicker was when we went to the wedding of one of his friends in Cape Girardeau, Mo. I’m not exaggerating when I say white people stared at us as we walked down the street.

See? Race is a thing.

The more serious the relationship got, the more I started thinking about kids.

If we had them, they would be “multiethnic” or “biracial” or “mixed heritage.” All terms that annoyed me. But I was getting ahead of myself, right? Was I in this or not? Was I ready to be committed to a guy whose family owned shotguns and went to the Waffle House?

My parents were both college professors. His parents hadn’t gone to college. My parents were Baha’is who didn’t celebrate Christmas. His dad played Santa Claus in various malls below the Mason-Dixon line during the yuletide season. My boyfriend listened to emo rock, for God’s sake!

This was bound to be a disaster.

But I didn’t break up with him.

I grew to love him more.

I loved that he shared a house off Sunset with a gay, Pakistani performance artist. I loved that he’d had the same Rottweiler for a pet since high school. I loved that he was a plaintiff’s attorney, helping clients who’d been discriminated against in the workplace.

I didn’t love his pickup truck — it was cramped and always had dog hair on the seat.

But no relationship’s perfect.

Fourteen years and two kids later, race is still a thing, in a growing list of things, that defines us.

Maisha Closson is a TV writer living in Los Angeles. She’s on Instagram as @maisha_closson

L.A. Affairs chronicles the current dating scene in and around Los Angeles. If you have comments or a true story to tell, email us at [email protected].

She ‘ghosted’ me. Twice.

We had a one-night stand. I wish it had stayed that way

‘Bringing Up Bates’ Season 11 will not air after abrupt cancellation