L.A. Affairs: Best advice I ever got for dating a guy with kids: Be like a cat, not a dog 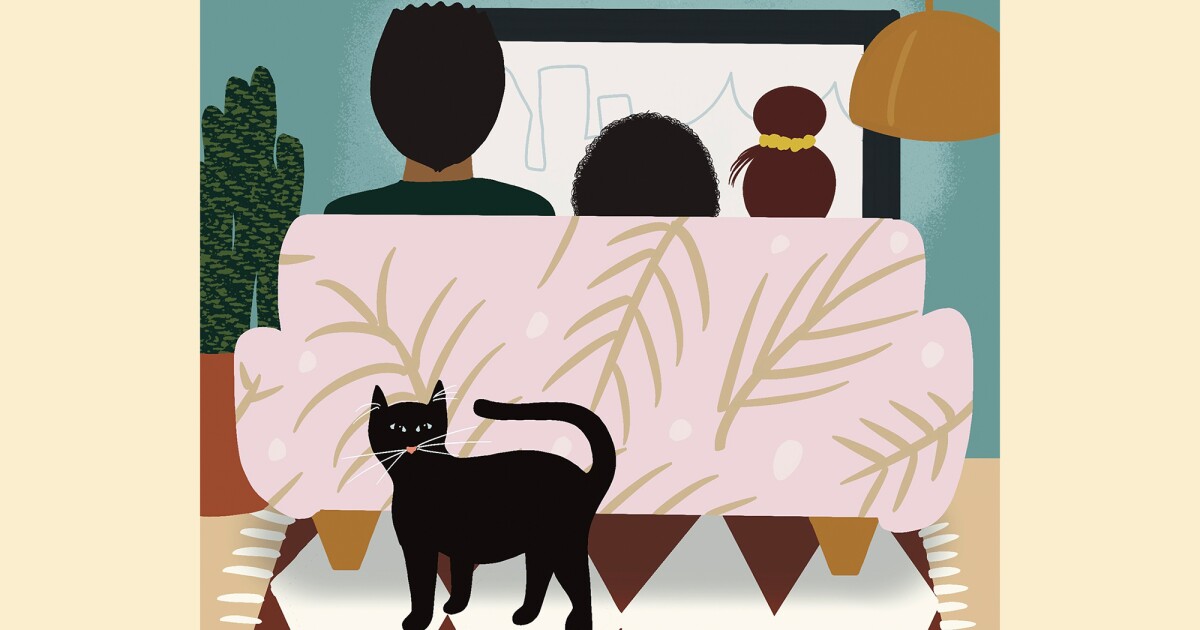 “I know it’s against your nature,” she said,”but when it comes to his kids, be a cat, not a dog. You’re going to want to hug them and bond with them, but it’ll be better if you relax and hang back. Wait for them to come to you.”

The advice came from my dear friend Jennifer, who has a stepfamily of her own and understands that it takes time and patience to blend and bond. I was nervous. Scared, in fact, of two girls, ages 8 and 10. I had already fallen in love with their father, so what would I do if they didn’t like me? What if I didn’t like them?

David and I both grew up in Northridge, both completed graduate and undergraduate degrees at UCLA, had friends in common from college and recently discovered that my cousin was his childhood music teacher. But we didn’t meet until OKCupid matched us, and it was love at first sight. There was no coffee rendezvous; he took me to the fantastically romantic Il Cielo in Beverly Hills on our first date, and we’ve been together ever since. It was a long wait — we are both in our mid-40s — but well worth it. David is my Dream Man.

I had wanted a partner, but one with kids? My dating profile indicated that I was open to it, but the gesture was theoretical. I had never dated anyone with children, and I never wanted my own.

Are you a veteran of L.A.’s current dating scene? We want to publish your story

I remember the first time I heard his youngest daughter’s voice. She’d called when we were driving to the Mark Taper Forum in downtown Los Angeles, and we put her on speakerphone while I remained silent because she didn’t yet know her dad was dating. As we inched along the 405 Freeway, my anxiety increased. I had become accustomed to our time alone: picnics at the Hollywood Bowl and the Greek Theatre, decadent meals at Black Market Liquor Bar and Gjelina, ocean-side walks in Santa Monica. He gave me tennis lessons and I dragged him to yoga class. We went to Club 33 at Disneyland and he treated me to couples massages and pool time at the Four Seasons spa. it was a “Best of L.A.” courtship! But my favorite thing was always cuddling on the couch and talking. I was starting to wonder what our relationship would look like when it became a story for four, instead of two.

We decided to wait six months before my first meeting with his girls: a trip to the arcade at Castle Park in Sherman Oaks. We figured flashing lights and photo booths, prizes and pinball, loud noises and lots of other kids would be a good distraction from “Dad has a girlfriend,” which also means: “Mom and Dad are not getting back together.”

David’s daughters are sweet and smart, loving and funny and generous and affectionate … and my friend Jennifer was right. I could hardly stand keeping my distance. Like a puppy dog, I wanted to cuddle up to them and play, but I remembered her advice not to overwhelm them, so I pretended like this was all no big deal, and tried to find the feline inside. I tried to relax, think of the stretch of time ahead of us, remind myself there’s no rush.

Because my own parents are divorced, I know what it’s like when Dad has a girlfriend. Months later, in a quiet moment, I told the girls as much, and let them know it’s OK to have any range of feelings about all this. “It was really hard for me at first,” I said, “and I would understand if it’s weird for you.”

“It’s not weird,” said his older daughter. “You’re awesome!” I nearly burst out into tears from the joy and relief of acceptance. Her sister, silent, looked at me, and tilted her head, as if to say, “Hmmm… we’ll see about you.”

We have tried to do all the “right” things: plenty of father-daughter time without me, consistent respect for their mom, a slow pace and patient approach. But it’s still hard sometimes, and I think about Jennifer’s advice quite a bit. There’s nothing like it online. Instead, I find hundreds of articles about how to advance and evolve, take steps forward. For me, however, progress has come only with a practice of restraint: Relax like a cat and take a step back.

The first time I attended a school play, David’s daughter came out after the show. I wanted to run over and hug her, give her the flowers we brought, congratulate her on a good performance — until I saw her mom and realized that my desires were tertiary. The girls come first, their parents second, and I’m a distant third. That’s the reality. I took a physical step back and let their mom have the moment.

It happens all the time. Even now, out of respect for the girls’ privacy, I self-limit sharing stories. I usually sit on the other side of the couch so the girls can cuddle up with their dad when we watch movies. They bicker and I remain silent, allowing him to parent as he sees fit. This is not to say I’m invisible, merely respectful. It’s a conscious choice. I resist my own nature and slow down, try to remain responsive to the girls’ needs, subordinate my own.

As part of an entrepreneurial project, David’s elder was selling homemade lip gloss, and when I offered to buy some, her sister said, “Well, it’s kinda like you’re family, so you should get the family discount!”

I wanted to cry.

Now I love our updated “Tour of L.A.” plan: Dodgers games and UCLA basketball, school plays and holiday events, and it’s just as easy to get tickets for four.

I knew I’d fall for David from the moment we met, but I had no idea I’d fall in love like this: utterly openhearted to his two beautiful girls.

Sunday is Mother’s Day. I’m a little bit jealous, because mothers and fathers have a clear role. Mine is special but unclear, constantly negotiated. I’d love to be more. I don’t want to be Mom, but maybe someday I’ll be more than “Dad’s girlfriend” to them.

For now, I’m just available, playful in my own way, and practicing patience.

The author lives in Encino and is a lecturer with UCLA Writing Programs. Her website is LauriMattenson.com

L.A. Affairs chronicles the current dating scene in and around Los Angeles. If you have comments or a true story to tell, email us at [email protected].

I got caught on AshleyMadison.com

8 lessons I learned about being single in L.A.

I finally asked her: Are we dating, or just hanging out?