From ‘Reservation Dogs’ to ‘Rutherford Falls,’ Native people are having a moment on TV 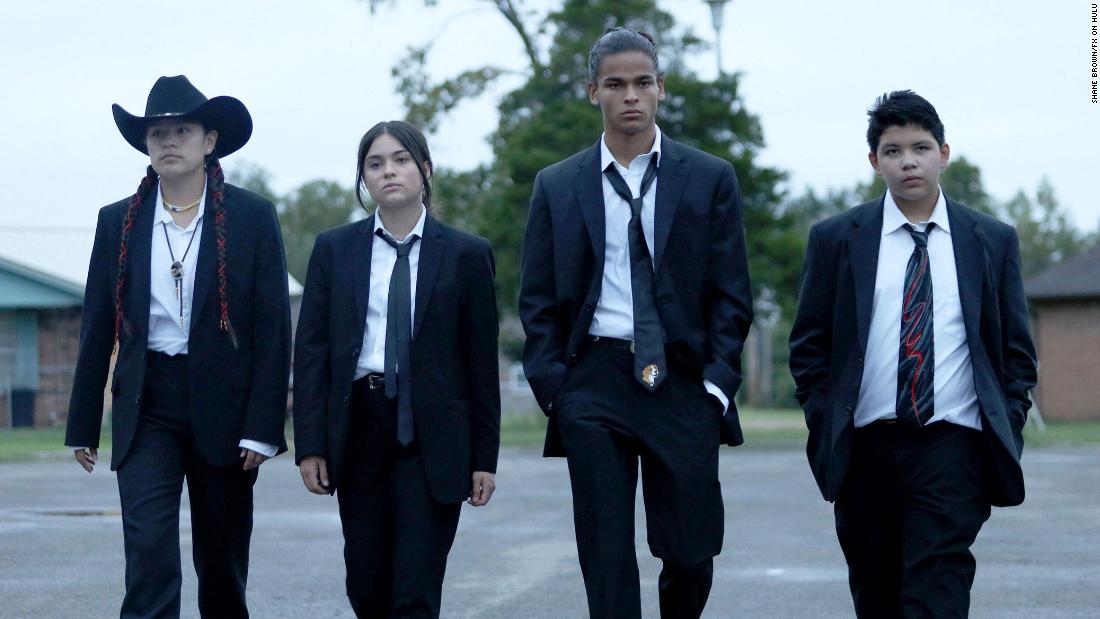 It turns out, however, that the man in the beads and feathers is not the kind of brave or formidable Native hero long romanticized in Hollywood. The unknown warrior instead departed this earth in a most anticlimactic fashion — his horse tripped over a gopher hole and squashed him dead before the battle even started.

“The spirit world is cold,” he tells Bear. “My nipples are always hard.”

It’s a deeply clever and funny scene, one that flips the tired trope of the Indigenous warrior on its head. It winks at Native viewers in the audience, who are all too used to seeing stereotypical portrayals of their people on screen. And it gently mocks those who still think of Native people as relics of the past, as if to say, “C’mon … really?”

“It’s bringing non-Natives into the joke and saying, ‘Hey, this is what you think we look like and we’re gonna let you laugh at it with us,'” Sterlin Harjo, a Seminole and Muscogee filmmaker who created “Reservation Dogs” with Taika Waititi, told CNN. “‘But it’s crazy that you think we still dress like that.'”

That tongue-in-cheek humor is just one of the elements that makes “Reservation Dogs,” the FX series that premiered on Hulu last week, so refreshing. It’s also one of two comedies on TV right now about Native Americans, by Native Americans — “Rutherford Falls,” the sitcom that premiered on Peacock earlier this year, has also garnered attention for its layered characters, culturally specific stories and delightful humor.

It shouldn’t be all that remarkable to see Indigenous people living their lives and having fun on TV, those in the industry say. But when you consider the landscape of onscreen Native representation before this year, the two shows are downright revolutionary.

They show Native characters as multidimensional

Before “Reservation Dogs” and “Rutherford Falls,” the only time Native people really appeared on screen was when “they were being shot by John Wayne or giving mystical advice to a White person,” said comedian Joey Clift. A lot of the time, the actors playing Native people weren’t even Native themselves.

What’s different about “Reservation Dogs” and “Rutherford Falls” is that they show Native Americans as multidimensional and existing in the modern era. And rather than having one or two Native characters, they depict entire communities of Indigenous people.

“It’s really a breath of fresh air for Native representation,” Clift, a member of the Cowlitz Tribe, told CNN.

“Reservation Dogs” centers on four rebellious Indigenous teens in rural Oklahoma who yearn to escape to ostensibly greener pastures in California. Along the way, they steal a chip truck, sell meat pies outside of an Indian Health Service clinic and get into fights with a rival crew.

“Rutherford Falls” doesn’t focus entirely on Native people, but they are featured on the show in a big way.

The series follows a pair of lifelong friends — Nathan Rutherford, who is White, and Reagan Wells, who is a member of the fictional Minishonka Nation — whose relationship is put to the test when their small town wants to remove a statue of Nathan’s ancestor. As Nathan works to preserve the statue, he finds himself at odds with one of the leaders of Reagan’s tribe. The series was recently renewed for another season.

Sierra Teller Ornelas, a Navajo and Mexican American showrunner, told CNN that when her co-creators Ed Helms and Michael Schur first approached her about the idea that would eventually become “Rutherford Falls,” she knew she wanted the show to have as many Native characters as possible. She wanted to capture the diversity and range of experiences that being Indigenous can encompass. So she did, bringing on Native writers from different backgrounds, tribal nations and regions of the country.

“That led to just not only more authentic stories but also better storytelling and funnier ideas,” she said.

They have authentic and specific stories

In the second episode of “Reservation Dogs,” the character Elora ends up at the Indian Health Service clinic for the stomach pains she got from eating too many hot chips. There, she encounters a sarcastic receptionist who can’t help but respond to her with withering looks and biting comebacks.

Crystal Echo-Hawk, a member of the Pawnee Nation of Oklahoma and president and CEO of IllumiNative, said she and her daughter cried from laughter while watching the scene — it was just so familiar. Once when her daughter was younger, she too had to go to the doctor for eating too many hot chips.

For other Native people to see themselves reflected in small ways like these is huge, Echo-Hawk said.

“We’ve been told for too long that our stories are too specific to our community and that nobody will get us if we’re not in leather and feathers,” she added. “‘Rutherford Falls’ and ‘Reservation Dogs’ have totally flipped that myth because clearly Americans from all backgrounds like these stories.”

That specificity extends to the smaller details too, like when the characters in “Reservation Dogs” use the slang terms “Skoden” and “Stoodis.” The shows don’t work too hard to explain themselves, staying authentic all while maintaining a universal appeal — a product of having creative teams and writers’ rooms filled with Indigenous people.

“We’re not holding anyone’s hand into this experience,” Harjo said. “We are dropping you in the middle of a Native community — and that’s risky.”

“Reservation Dogs” and “Rutherford Falls” don’t completely ignore the challenges found in Indian Country, but they don’t dwell too much on it either.

Instead, the focus here is on Native joy.

“Reservation Dogs” was born out of Harjo and Waititi — who is of Māori descent — swapping funny stories from back home with each other, Harjo said. The onscreen stories that had existed about Native people up until then were all depressing, and they wanted to make something that would capture just how funny and quirky their communities were.

“Humor was a part of our survival,” Harjo added. “To see it not reflected on screen forever was really strange.”

The characters in the shows have dreams, aspirations and romantic interests. They get into mischief and crack jokes at each others’ expense. Simply put, they’re allowed to be.

After a pandemic that hit Native people particularly hard, said Ornelas, that joy is a welcome relief.

“It’s just been a wonderful experience to see that Native joy and to feel like we helped to create that in the show,” she said.

With the success of “Reservation Dogs” and “Rutherford Falls,” there’s perhaps never been a more exciting time for Native American representation on TV. The two shows have set a baseline for what authentic, nuanced depictions of Indigenous people can look like, and have shown that there’s an appetite for those stories, too.

Already, there’s more Native-led storytelling to look forward to: “Spirit Rangers,” an animated series about three siblings who can turn into animal spirits to protect their national parks, and “Rez Ball,” a coming of age film about a Navajo high school basketball team. Both are being made for Netflix.

That momentum is a sign, many say, of bigger and better things to come.