From Prison to the Gallery 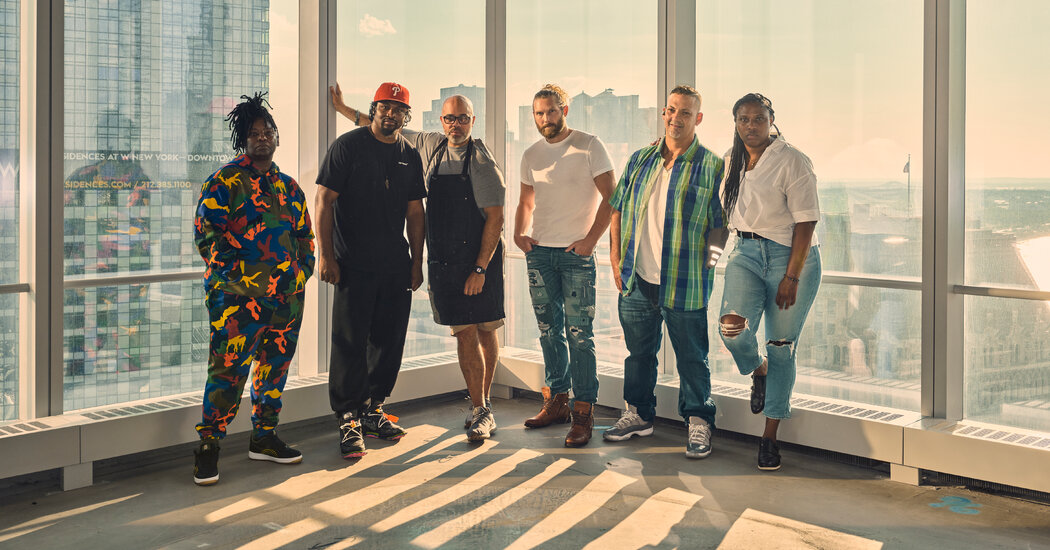 In 2010, in the recreation center of the Fairton Federal Correctional Institution, a medium-security prison for men in South New Jersey, an art collective was born.

Five years into a 13-year sentence on drug-related charges, Jared Owens rediscovered his childhood love of ceramics and taught himself to paint. He was overseeing the art room by the time Gilberto Rivera, a graffiti artist, and Jesse Krimes, with an art degree from Millersville University in Pennsylvania, transferred to Fairton to finish their terms. They shared art magazine subscriptions, supplies, ideas and camaraderie in resistance to their circumstances.

With the help of Owens and Rivera, Krimes covertly gathered prison bedsheets that he collaged with New York Times images, using hair gel and a spoon to lift and transfer the printed ink onto his contraband canvases. He smuggled pieces out, one by one, through the prison mail room. Over three years, the subversive practice evolved into a monumental mural, a Hieronymus Bosch-like allegory of heaven, earth and hell, that he titled “Apokaluptein: 16389067” — Greek for apocalypse coupled with Krimes’s inmate number. It stretched 15 feet by 40 feet when he was finally able to assemble the 39 segments for the first time upon his release in 2013, after serving six years on drug charges.

“This isn’t about some outsider coming in and doing an arts program — it was them on their own, seizing that space, whatever dignity they could craft, and then carrying that with them when they came home,” said Alysa Nahmias, director of “Art & Krimes by Krimes,” a film that will be released in theaters on Sept. 30 by MTV Documentary Films and streamed by Paramount+ starting Nov. 22. It chronicles the making of “Apokaluptein” and Krimes’s first five years out of prison as he struggles to forge a career in the art world with the support of friends. One of them is Russell Craig, who found art at age 7 while living in the foster care system. After serving 12 years on drug charges at prisons in Pennsylvania and Virginia, he met Krimes when both were newly released and working as assistants with Mural Arts Philadelphia’s restorative justice program.

These artists were among several dozen in the landmark exhibition “Marking Time: Art in the Age of Mass Incarceration,” which debuted in 2020 at MoMA PS1 and has been touring since (it just opened at Brown University). Organized by Nicole Fleetwood, the MacArthur award-winning art historian, it gave new visibility to people fighting societal erasure in the U.S. carceral system, which now imprisons an estimated two million people annually — a 500 percent increase since 1970. Black people are incarcerated for drug offenses at 10 times the rate of white people despite roughly equal use, according to the American Civil Liberties Union.

Now a small cadre of artists from the exhibition is gaining traction in the art world, with gallery representation, museum acquisitions, prestigious commissions, residencies and fellowships. With the aid of powerful donors, artists, arts leaders and activists, this vanguard is working structurally to pave the way for their peers. Whether museums nationwide will support such efforts has yet to be determined.

Fleetwood — who described the peer mentoring at Fairton, echoed in prisons around the country, as “inspirational” — hopes the exhibition “helps to shake up cultural institutions in terms of their gate keeping around what they typically show.”

“Marking Time” drew more than 35,000 visitors at MoMA PS1 despite Covid restrictions and won critical raves, with “Apokaluptein” hailed as a “carceral magnum opus” by Holland Cotter in The New York Times.

“‘Marking Time’ was definitely pivotal in all of our careers and pretty much legitimized folks who come from this incarcerated background,” said Mary Enoch Elizabeth Baxter, an artist in the exhibition who was imprisoned for eight months on charges that included felony conspiracy. She is now on staff at MoMA PS1 as a project manager for learning.

She has received multiple fellowships, including a residency to examine adultification bias against Black girls — how society tends to regard some children as older than they are, needing less protection — as a root cause of incarceration. Baxter has just been commissioned to lead workshops with women incarcerated at Rikers Island, to culminate in a community mural.

The art dealer Barry Malin has seen a huge shift in collector interest since he started representing Krimes. In 2016, the artist walked into the new Chelsea space opened by Malin, a former surgeon with a focus on social justice, and on the basis of their personal connection, the gallerist offered to show his prison works. Nothing sold from that first exhibition, but it led to a string of grants for Krimes.

“There was a challenge to getting people to appreciate it just as art,” said Malin, who also represents Craig and Owens. He says he has seen a new receptivity since “Marking Time”; the 2020 national reckoning with race and justice; and shifting sympathies toward people ensnared by drugs, in the wake of the opioid crisis.

Last month, Owens was finishing the works in his studio at Silver Art Projects, on the 28th floor of 4 World Trade Center. Co-founded by Joshua Pulman and Cory Silverstein and funded in part by Silverstein Properties, which redeveloped the World Trade Center complex, the nonprofit offers free studio spaces and career opportunities to 28 emerging artists from marginalized communities.

“Society can’t really visualize prisoners as even human beings,” Owens said. “I’m going to bring your attention to that,” he added. “I’m going to keep it in your mind’s eye.”

He was using shadow figures appropriated from an 18th-century diagram of the Brookes slave ship, reproducing them in rows as a serial motif across canvases that flicker between representation and smudgy abstraction and suggest the architecture of the prison.

With a grant this year from the Art for Justice Fund, founded in 2017 by the philanthropist Agnes Gund to support activists and artists working to reduce the prison population, Silver Art is now reserving several spots in the residency annually for formerly incarcerated artists. Baxter, Krimes and Craig joined Owens in the coveted studio spaces earlier this month.

“The alchemy of art as a tool for securing justice cannot be overstated,” said Gund, who collects work by Krimes and Craig (as does the Brooklyn Museum).

“It took me years to decide to unpack my prison experience,” Craig said. “I didn’t want to exploit my situation or anyone else’s.” Three-quarters of the exhibition sold, with prices starting at $35,000. Among his collectors were Tim and Stephanie Ingrassia (she is vice chair of the Brooklyn Museum).

Krimes has now had five exhibitions with the gallery. “People aren’t questioning anymore, is he an artist or is he this sort of curiosity?” Malin said. Krimes’s series of “Elegy Quilts,” pieced together from the clothing of incarcerated individuals and depicting their remembrances of home, started at $25,000 and sold out quickly to collectors including Beth Rudin DeWoody.

Malin has gradually raised Krimes’s prices to $75,000. “The next hurdle to overcome,” Malin said, “is, are people going to take it seriously enough to go above this price point?”

During a recent public discussion called “Confronting Mass Incarceration” at the Anderson Ranch in Aspen, the Brooklyn Museum’s director, Anne Pasternak, who led the acquisition of works by Craig and Krimes, apologized to Krimes for an earlier comment about his work having gotten expensive.

“In retrospect, I realized that could have sounded like, because he had been incarcerated, he didn’t merit the prices of other artists, which is not what I intended,” she said in a recent interview, adding, “It requires us all to be more conscientious of our biases that we may not be aware of.”

Early on, Krimes noticed he was often the only artist included in shows about incarceration who had actually served time. “I’m a white guy from eastern Pennsylvania, I should definitely not be the only face of incarceration,” said Krimes, who grew up in a working-class community in Lancaster.

The documentary compares the lighter sentence Krimes received (six years) to that of a Black man sentenced the same day for the same crime (20 years), from the same judge, who said he saw “potential” in Krimes. The artist said he experienced how penitentiaries intentionally stoked racial divisions between rival gangs as a means of control. He pointed out that visual artists were respected prisonwide for the tangible records of humanity, such as portraits, they could provide to other inmates.

“That’s where I realized I could use artwork as a collective building tool to cross racial barriers,” Krimes said.

Krimes and Craig received a grant from Open Philanthropy to co-found the Right of Return USA in 2017, which offers $20,000 fellowships to a half dozen formerly incarcerated artists each year.

Baxter received one of these inaugural fellowships after prison, when she had less than $5 in her bank account, and described the support as life-changing. “It gave me an opportunity to find stable housing and revisit my art aspirations,” she said. The grant funded her musical film “Ain’t I a Woman,” in which Baxter told her life story, including giving birth in prison while shackled to a gurney.

(Other Right of Return fellows include the poet Reginald Dwayne Betts; the artist Sherrill Roland, represented by the Tanya Bonakdar Gallery; Gilberto Rivera; and Tameca Cole, whose 2016 collage of a face shrouded in a gray cloud, titled “Locked in a Dark Calm,” is the opening image in “Marking Time.”)

Krimes and Craig recently received $1.1 million from the Mellon Foundation, to help expand Right of Return from a fellowship to a nonprofit called the Art and Advocacy Society, which will hire staff and encompass a school and residency program.

They are working with Kate Fowle, former director of MoMA PS1, who brought “Marking Time” to the museum, on the school’s pilot program, being hosted by MoMA PS1 with $300,000 in additional funding from Gund’s Art for Justice and the Ford Foundation. A cohort of six artists — Krimes, Craig, Owens, Baxter, Cole and Rivera — are receiving professional development and one-on-one mentorship from Sterling Ruby, Hank Willis Thomas, Rashid Johnson, Lorna Simpson, Derrick Adams and Rafael Domenech.

When asked why a limited number of opportunities seem to keep going to the same handful of artists, Fowle said, “They are going to be the support structure for future artists coming through school, the mentors, the ones able to guide how these types of programs expand.” She and Krimes envision an entry-level tier for artists getting out of prison to learn studio skills and art history. The Art and Advocacy Society would develop the core curriculum, to be implemented at museums across the country.

Whether museums broadly will fund such an initiative is an open question. MoMA PS1, for example, received the top end of what Art for Justice gives — $200,000 — but it was not enough to pay for both tiers of the school.

In November, Christie’s will auction works by Johnson and Mickalene Thomas, among others, to benefit the Art and Advocacy Society and a permanent residency program. “Our goal is to create a multiracial national movement that is foundational and lasts,” Krimes said. His biggest fear is that the art world’s interest will move on to the next thing before anything structural has changed.

“I recognize the power of calling yourself a ‘formerly incarcerated artist,’” he said. But ultimately, he added, “you want to be known as just an artist.”