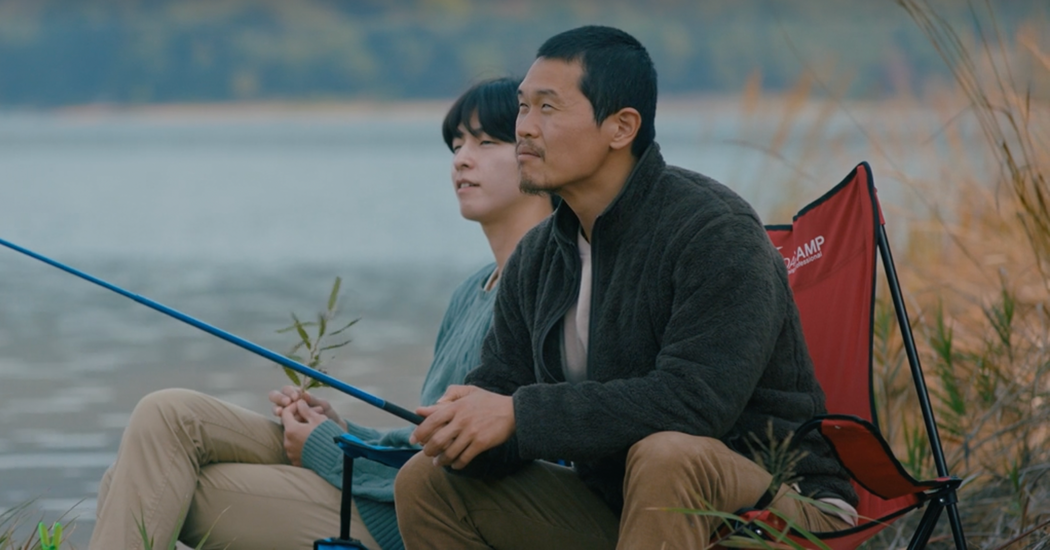 Stream it on Tubi.

In a remote village in South Korea, the farmhand Jin-woo (Kang Gil-woo) and his 6-year-old ward, Seol, live a quiet, secluded life on a sheep ranch with its owner, the grizzled Mr. Kim, his senile mother and gentle daughter. As “A Distant Place” begins, the relationships between these five characters are tender but mysterious: Seol calls Jin-woo “mommy,” Mr. Kim “grandpa” and Mr. Kim’s mother “Nana.” Park Kun-young’s feature reveals the story behind this odd, makeshift family gradually and subtly, as two new arrivals — Jin-woo’s male lover and sister — upset the balance of the household.

“A Distant Place” combines the familial melodrama of a Hirokazu Kore-eda film with the restrained pathos of the work of Lee Chang-dong, but there’s a piercing originality to Park’s style. Long and wide takes luxuriate in the fog-cloaked rural scenery, with shifts in angle and distance relaying narrative revelations with an understated touch. Though the film unfolds as a queer drama with recognizable themes of outing and ostracization, it dwells more in quiet moments of resilient intimacy — Jin-woo observing as his lover teaches poetry to a class; Seol and Nana bathing in a tub — than in dramatic highs and lows.

A blend of creature feature, erotic thriller and coming-of-age drama, this German film from Nicolette Krebitz is as arresting as it is unclassifiable. Ania (Lilith Stangenberg), an information technology specialist at a nondescript marketing firm, is a repressed and isolated young woman, mocked by her sister and treated like an errand girl by her sleazy boss. One day, she encounters a wolf while walking at the edge of the nearby woods, and it seems to unleash something in her. Soon, she’s contriving all sorts of convoluted plans to entice the animal out of the forest and entrap it — and when she succeeds, “Wild” takes a strange, feral turn.

It’s hard to say, as the proceedings get weirder and weirder (taking sexual, scatological and pyromaniacal turns), if Ania is mentally ill, racked by grief or simply from another planet. “Wild” offers little in the way of explanation or exposition, but this is the movie’s strength: It confronts us with a character and a world that is matter-of-factly off-kilter. It’s not just the wolf that feels out of place; Ania’s interactions with everyone around her belie a touch of the uncanny, as if they’re all in a universe just slightly left-field of ours, brimming with both menace and a sense of thrilling possibility.

Stream it on Mubi.

The latest of a series of stellar independent films to emerge from Georgia in recent years, “Wet Sand” traces the fissures that open up in a provincial seaside community when a man is found dead by suicide. As we soon gather from the villagers’ gossip, the recently deceased Eliko was a despised loner, ostracized for his perceived snobbishness and lack of piety. When his long-estranged granddaughter, the tattooed, punkish Moe (Bebe Sesitashvili), arrives from Tbilisi for the funeral, the prejudices beneath these euphemisms slowly come to the surface: Eliko was gay, an unimaginable sin in this very religious, hypermasculine town.

This is one of the many secrets that emerge from the woodwork over the course of Elene Naveriani’s film, which unfolds not just as a portrait of patriarchal culture in rural Georgia — where, as a TV news segment within the film tells us, the church introduced Family Day in 2014 to counter the International Day Against Homophobia — but also of the resistance that persists even in the most oppressive environments. The film is suffused by the sounds of the ocean and shots of rippled, moonlit waves, offering an often stunning backdrop for the characters’ quiet moments of rebellion.

Stream it on Netflix.

In this drama by Abner Benaim, Alicia (Ilse Salas), a middle-aged Mexican transplant in Panama, goes through the motions of daily life — her job at a real-estate firm; her nights alone in an eerily empty apartment — like a zombie. As we soon learn, she has recently undergone a devastating loss and a divorce. Yet, even as “Plaza Catedral” invites us to sympathize with its heroine, it also immediately pinpoints Alicia’s place in Panama’s class hierarchy and her insular mind-set. As she drives through the streets, she pays little attention to street kids rapping on her car windows for money.

This lucid sense of critique is the strength of “Plaza Catedral,” which otherwise unfurls a familiar tale. A particularly persistent local street kid, Chief (Fernando Xavier de Casta), shows up at Alicia’s door one day, bleeding from a gunshot wound. A reluctant Alicia takes him in against the advice of her friends, and the two slowly warm to each other. This might sound like the recipe for a simplistic, sentimental drama about connection across race and class divides, but there’s a gritty and uncompromising severity to “Plaza Catedral,” which avoids sensationalism or savior narratives even as it rushes into a slightly contrived ending.

In a gleaming, color-saturated French countryside traversed by suited-and-hatted monsieurs in vintage cars, a mysterious man (Ciaran Hinds) flees a band of bumbling goons. Who is he? Why is he being pursued? With a plot as nondescript as its title, “The Man in the Hat” doesn’t offer any answers, but those are beside the point. The cat-and-mouse chase is simply an excuse — a connective thread, if you will — for a series of sweet, comedic episodes that our protagonist stumbles in and out of, like a reader flipping through a book of interrelated short stories.

Think Buster Keaton in color, or Mr. Bean with an art-house sensibility. Our hero doesn’t speak, though the people he encounters sometimes do, relating tragicomic stories, or bursting into song. The pleasures on display in John-Paul Davidson and Stephen Warbeck’s film are primarily visual or physical: There are high jinks involving bullfights, tandem bikes, exploding sandwiches and a herd of goats. Hinds’s striking, malleable face becomes a kind of canvas as it absorbs the world around him and evinces a pure wonder. Charming and simple but impeccably made and acted, “The Man in the Hat” courses through with a love for stories, cinema, and above all, people — in all our random, absurd and banal glory.