‘Finch’ Review: Three for the Road 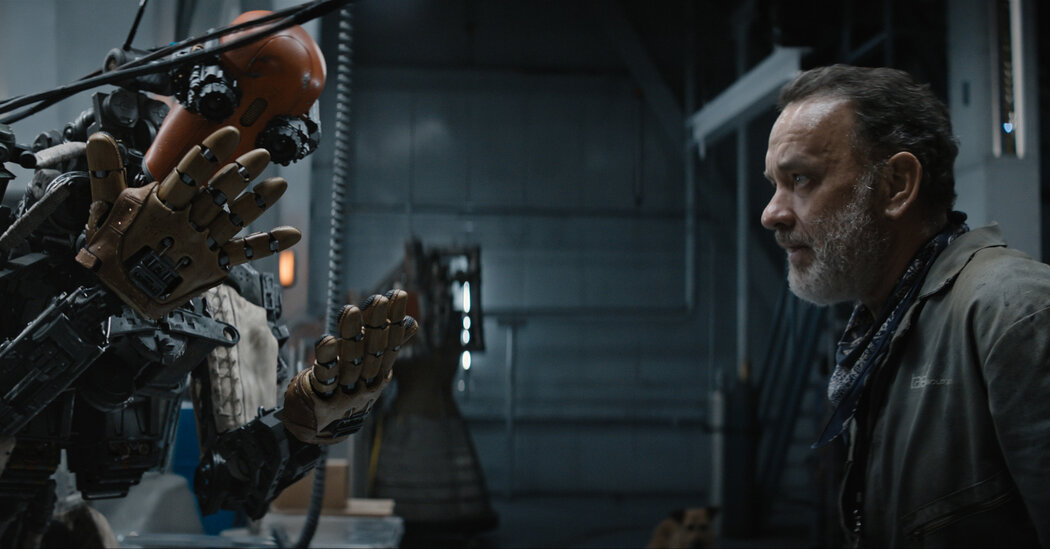 The science is sparse, but the sentiment is several inches thick in “Finch,” a post-apocalyptic road movie in which Tom Hanks spends almost two hours scavenging for a plot.

Helping him is a darling mutt (played by the rescue dog Seamus, in his first acting role) and two metallic companions, Dewey and Jeff (the second voiced and performed by Caleb Landry Jones). It’s 15 years in the future and a decade since a solar flare turned Earth into an irradiated dust bowl and the ozone layer into Swiss lace. Hunkered in a below-ground laboratory is Finch Weinberg (Hanks), a former robotics engineer in St. Louis who has repurposed his old workplace into a survival bunker.

By day, Finch braves skin-searing heat and the occasional dead body to forage for supplies, encased in a self-made protective suit and accompanied by Dewey (actually a modified lunar rover). In the evenings, he works on Jeff, the android he’s building to care for the dog when he himself is gone. A painful cough and a bloody nose tell us that day may not be too far-off; on the plus side, they also signal the unlikelihood of a sequel.

The arrival of a superstorm that, with biblical specificity, is expected to last 40 days, forces Finch and his pals into a solar-powered R.V., destination San Francisco. The lengthy journey will allow Jeff to learn about trust and responsibility and human beings, especially the nasty kind that the movie teases and Finch seems to believe are lurking everywhere. If he’s right, then they’re much better at hiding than he is.

Directed by Miguel Sapochnik and written by Craig Luck and Ivor Powell, “Finch” is a facile father-son metaphor whose doomsday setting is sugarcoated with gentle comedy and jaunty music. Hanks is as relatable as ever and the cinematographer, Jo Willems, shooting mainly in New Mexico, surrounds him with a credibly arid dunescape. But the action, such as it is, is sclerotic and Finch a cipher whose previous life — aside from a brief flashback to his acquisition of the dog — remains almost entirely shrouded.

Unlike Francis Lawrence’s far superior last-man-and-his-dog thriller, “I Am Legend” (2007), “Finch” is sweet, yet disappointingly uneventful.

“I wish I’d done more with the time I had,” Finch mourns at one point. I wouldn’t be surprised if the filmmakers were thinking exactly the same thing.

Finch
Rated PG-13 for radiation in the air and lumps in the throat. Running time: 1 hour 55 minutes. Watch on Apple TV+.