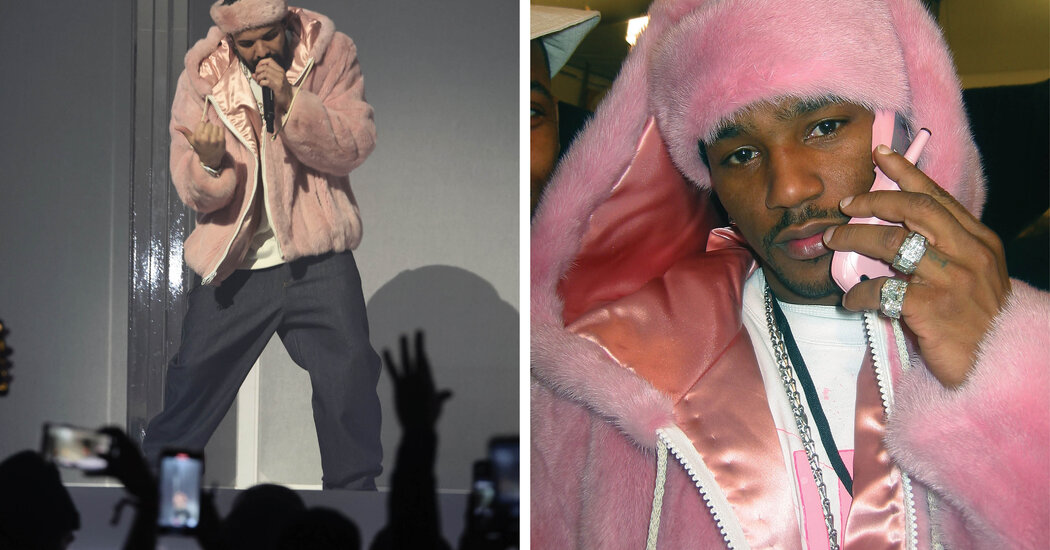 There’s an internet-famous photo of Cam’ron wearing a pink mink jacket with a matching headband, holding a pink flip phone to his ear. It was taken at a Baby Phat fashion show in 2003, when the Harlem rapper was in his peak peacock era — a hardrock dandy oozing loucheness and insouciance, blending an aura of toughness with devil-may-care liberation.

Drake was 16 when that future meme hit the internet, a Canadian teen actor with rap star dreams. He hadn’t yet formed the aesthetic identity that would make him the most influential hip-hop performer of the past decade. He was, first and foremost, a fan.

He still is. At the Apollo Theater on Saturday night, at the first of two shows he performed for SiriusXM subscribers, he brought out Cam’ron and the Diplomats for a guest set. For that part of the show, Drake wore Cam’ron’s pink mink jacket and headband — the actual garments. This was something more than homage, and also something more than mere enthusiasm. This was Drake making an in-joke to the hip-hop internet of the early to mid-2000s, while acknowledging how fans of all stripes would love to briefly inhabit the skin of their heroes. Given the unique opportunity, Drake chose to become the meme.

Drake is a social media sophisticate, a fine walker of the almost completely obliterated line between fandom and creation. No contemporary pop star has so effectively weaponized the ways in which boosterism and distaste coexist in online spaces. Drake may be the most popular musician whose fans are not an organized troop, like the Swifties or the BeyHive — that’s because Drake fandom is more interactive. Even his biggest detractors turn their contempt into shareable bites, and Drake reacts to that dismissal with cool élan, incorporating it into his narrative when it serves him.

To be a fan in this era is to effectively write yourself into your idol’s story, or to make your idol’s art somehow about you. And to be a truly modern celebrity is to acknowledge the ways in which you are being consumed, positive and negative alike, and feed those mouths accordingly.

This past week, Drake played with that fire twice. His Apollo concert was mostly a hits and B-sides revue. But he animatedly and joyously danced and rapped along while the Diplomats performed “I Really Mean It,” “Dipset Anthem” and Jim Jones’s “We Fly High,” a literal display of how fandom has shaped his own career arc. A few days earlier, he demonstrated the same point in more ostentatious fashion. In the newly released video for “Jumbotron ___ Poppin,” a song from his 2022 collaborative album with 21 Savage, Drake wore several iconic pieces of jewelry custom-made for Pharrell Williams and recently sold by Joopiter, an auction platform founded by Williams.

There is an additional layer of subtext here. In a 2010 episode of the MTV show “When I Was 17,” Drake revealed that, as a teenager, he bought a microphone purportedly signed by Pusha T on eBay. At that time, Drake was a committed fan of Clipse, the duo of Pusha T and his brother Malice. (Williams, as part of the production duo the Neptunes, helped usher Clipse into the world.)

But in later years, Pusha T became Drake’s primary antagonist, revealing via a song that Drake had fathered a son, and also standing fast with Kanye West during the Kanye-Drake cold war (until recently, of course). On the MTV show, Drake said he used the mic so much as a teenager that the autograph wore off (and conceded that it might not have even been real). But in an interview with Rap Radar in 2019, he said that he still owned the mic. It had ceased to be Pusha T’s; it had become his own.

That Drake has never been shy about how he soaks up influence sets him apart from most of his peers. (It is something he shares with West, his primary idol turned rival.) He’s long been an enthusiastic booster of younger artists working in new styles, and speaks openly of how his elders shaped him.

In hip-hop, where even covering another rapper’s song is considered heresy, this kind of naked fandom is often discouraged. And as might be expected, Drake’s sartorial love notes this past week resulted in a new raft of memes speculating about what other sorts of accoutrements he might buy in order to insert himself into key moments in hip-hop history: the paper towel bandanna from Jadakiss’s “Knock Yourself Out” video, the gun used by Shyne in the 1999 Club New York shooting.

But being a fan of Drake means, in some way, accepting that identity is constructed by trying on pre-existing ones and seeing what fits. Embedded in the act of putting on the coat or the necklace is the knowledge that it eventually comes off — that’s when you learn who you’ve become.