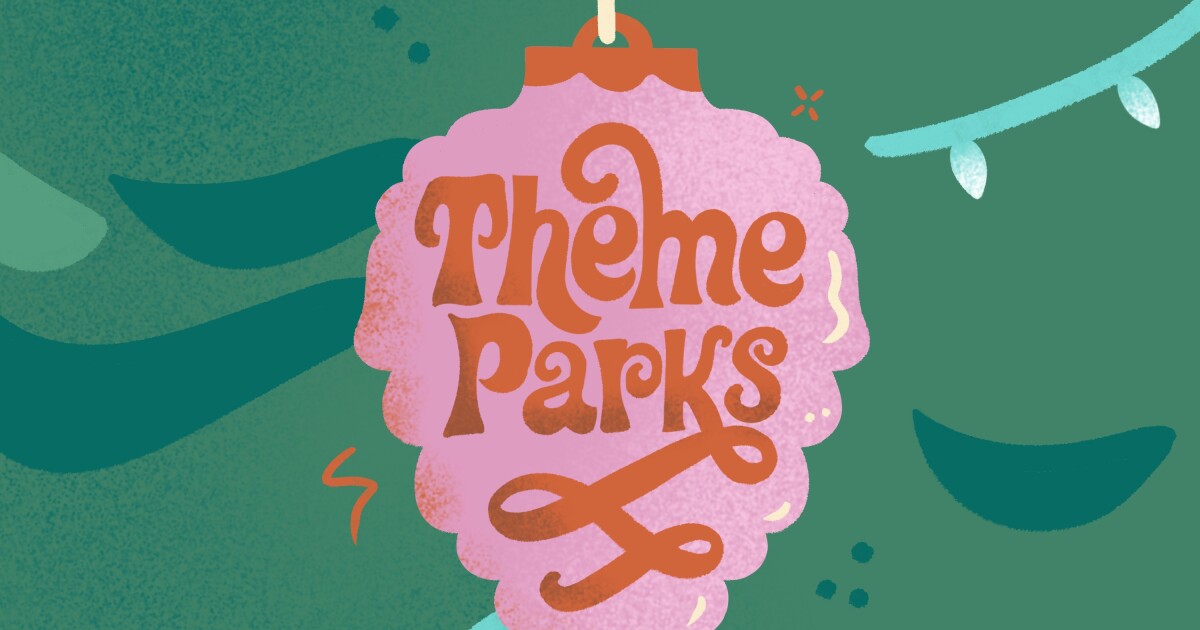 Growing up in Southern California often means growing up with theme parks. Although gift shops at the likes of Disneyland, Universal Studios and Knott’s Berry Farm feature plenty of items designed to catch our attention, for our gift guide we wanted to expand the perimeters a bit and embrace not just the parks but also their art and history.

“3D Disneyland: Like You’ve Never Seen It Before” is nostalgia at its finest. Old-school photos of Walt Disney’s original theme park are combined with a passion for traditional 3-D photography. Glasses are included, which help bring to life images of long gone attractions such as the Skyway or Fantasyland’s pirate ship-themed restaurant. You’ll want to linger and pretend you’re walking along the original Main Street or a more woodsy-feeling Frontierland. Expect a little dizziness if you keep the glasses on for long, but don’t expect to time travel with some side-effects.

This year saw the opening of Knott’s Bear-y Tales: Return to the Fair, an adorable video-game like animated romp of a ride with cartoon critters and lots of pies — a respectful and nostalgic 2021 endeavor that livens up the park by celebrating its history. The ride is a nod to the 1970s original Knott’s Bear-y Tales, a wild and wacky attraction overseen by theme park design legend Rolly Crump. Bear-y Tales is full of mischievous frogs, all plump and spindly contradictions that steal the show, and Knott’s is celebrating the attraction with these cute-but-weird plushies, a treat either for those who grew up with the original or just discovered it this year.

These are not toys. But so much of Mary Blair’s art for Disney possessed a toy-like wonder to it, and these 12- by 12-inch maple cutout blocks capture her understanding of color as well as her whimsical view of living creatures. Blair, the principal designer of Disneyland’s It’s a Small World attraction, also had the ability to capture motion in her work, and these blocks look caught mid-frame in an animated film. They’re hefty enough to stand tall on a shelf but could also be framed. Hang them, and imagine you have your own Blair mural in your home.

‘A Brush With Disney: An Artist’s Journey Told Through the Words and Works of Herbert D. Ryman’

Long regarded as one of Disneyland’s master planners — also a pivotal contributor to the likes of “Fantasia” and “Dumbo” — Herb Ryman was a prolific artist in his life outside Disney. This gorgeous coffee table book hooks you with Ryman’s concepts for Disneyland’s early years and then keeps you engrossed by offering a glimpse into his mind. Told through Ryman’s own words, “A Brush With Disney” captures his restless spirit and ability to translate to paper the fullness of life around him. Whether it’s his fascination with the circus or his elaborate concept art for Disneyland’s “Indiana Jones” attraction, Ryman had an amazing ability to reimagine, reframe and simply document reality.

Forget your artisanal jam. Southern California theme park fans know there’s only one jam that matters: the boysenberry preserves from Knott’s Berry Farm, an attraction as important to the local theme park as its Timber Mountain Log Ride.

Animator-turned-Walt Disney Imagineer Claud Coats shaped many of Disneyland’s early attractions, his expertise as a background artist bringing extravagant tableaux to life. David A. Bossert’s book focuses primarily on Coats’ theme park work, and in so doing treats large-scale and expansive environmental storytelling as the works of art they are. Many of Coats’ designs still stand in Disneyland today, and they helped to define what a ride-like environment would look and feel like.

High priced, but an absolute treasure. Disneyland fans know Eyvind Earle as the artist who defined the look of “Sleeping Beauty” and as the primary inspiration behind the castle at Disneyland (and Disneyland Paris). But Earle was also a master interpreter of nature, using unexpected color combinations to heighten the majesty, awesome power and magical presence of the world beyond our cities. This book is hefty, possessing the look and feel of the tomes that would open Walt Disney’s early animated films, and it treats one of Earle’s lifelong personal passions — the Christmas card — with reverence.

A highlight of this year’s Halloween Horror Nights was a maze themed to “The Bride of Frankenstein,” and among Universal’s relatively recent Monsters-themed merch, what caught our eye was a vintage-style glass. The wraparound art is loaded with monsters and features stylized takes on Dracula, the Bride of Frankenstein, Frankenstein, the Creature from the Black Lagoon and the Wolf Man. Good news: Put a soda in there, and they don’t look that ominous.

It’s a Small World board game

Funko’s It’s a Small World board game is handy for those family nights when one is missing Disneyland. At its core, the game — for ages 4 and up — is relatively simple, but the real delight is the 3-D board. It pops together to create mini “rooms” for boats to travel through, with the ride’s signature clock tower at its center. In turn, it’s a game that understands the true appeal of the It’s a Small World attraction. No, it’s not its song; the ride is full of colorful scenes that we don’t want to take our eyes off of.

A Portrait of Walt Disney World

Southern Californians are spoiled, what with Disneyland, the world’s preeminent theme park, in our backyard. But Disneyland also set a template that led to Walt Disney World, the world’s most visited theme park. Walt Disney’s initial vision for the Florida park centered on the creation of a living, working city known as EPCOT. This book by Kevin M. Kern, Tim O’Day and Steven Vagnini details not just that concept but also what it ultimately led to, which in a way is the themed resort as a living, working community.

This 2014 book is a must-own for anyone obsessed with Southern California’s multitude of theme parks, as Christopher Merritt and Domenic Priore document a place that was alternately of its time and ahead of it. While Pacific Ocean Park would ultimately fail in its aspirations to compete with Disneyland, this despite its oceanfront location, it advanced our understanding of what works — and what doesn’t — in a theme park-like setting. This is a time before IP (intellectual property) ruled, and theme parks would reflect the art and Space Age visions of its 1950s-1960s prime. But while the optimism it represented is timeless, the park itself proved not to be.

Sometimes we just want to people watch or to explore the large-scale sculptures of the environment. Theme parks don’t always have to be lines and strollers and high-calorie snacks. Disneyland’s Grand Californian hotel has a beautiful new spa, and our only complaint is that in this late-pandemic age, it is open only to guests staying at one of the resort’s hotels. That being said, we know plenty of locals who plan getaways at the resort — or are trying to persuade a partner to plan a getaway at the resort — and may be looking for an attraction that’s more of the self-care variety.

Any Disneyland fan should keep an eye on the store offering of San Francisco’s Walt Disney Family Museum, as it’s a treasure-trove of vintage Disneyland periodicals and paraphernalia. But who knew the museum’s wares were so fashionable? Launching this year with an exhibit on the Walt Disney Studios’ World War II efforts was a track jacket dedicated to Fifinella, a character created by Roald Dahl and the Walt Disney Studios that would eventually become an insignia for the WASPs, the Women Airforce Service Pilots. Fifinella, a tiny gremlin, is a character full of life, and it is especially eye-catching on a black jacket.

Want something a little more well-known? The Donald Duck bomber-style jacket has you covered. Propaganda once, stylish today.

Locals may overlook a tour of a Hollywood studio for a number of reasons, but theme park fans should give the revamped Warner Bros. Studio Tour a visit.

The tour has been updated with a host of theme park-like trappings, including interactive “Harry Potter” exhibits that wouldn’t be out of place at Universal Studios’ Wizarding World of Harry Potter. Indeed, the Warner Bros. updates were handled by Thinkwell, a local firm known best for its contributions to theme parks around the world. They’re good for photos, sure, but the new exhibits are heavy on interaction and give guests a chance to play inside some well-known franchises.

Those who have been to the Wizarding World of Harry Potter either here in Los Angeles or in Florida know that one of its highlights is its candy. So color us overjoyed to discover that the parks are selling one of its most popular items, a chocolate frog, in ornament form. While not edible, it looks, for chocolate lovers, absolutely delectable. This chocolate frog not only is safe for pets but also will last on trees for years to come. Online stock can be hard to come by, but the park’s shops have them aplenty.