Commentary: CFP rankings: Cincinnati is the biggest loser and USC is a surprise winner 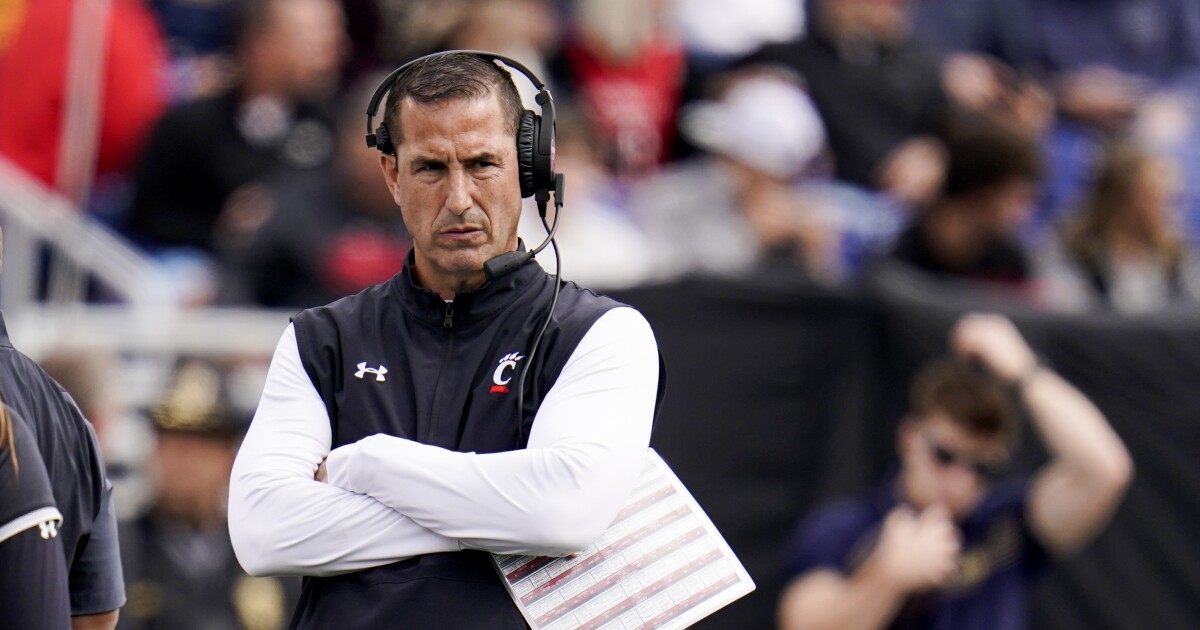 The College Football Playoff selection committee’s first rankings of the season served as a reminder of why expansion is a must for the health of the sport long term.

Here are the five biggest losers from Tuesday’s unveiling (hint: None of them are from the Southeastern Conference or the Big Ten):

The Cincinnati Bearcats are undefeated and ranked No. 2 in both polls, but they can now get used to seeing a No. 6 by their name because college football’s most important rankings were not swayed by their 24-13 win over No. 10 Notre Dame in South Bend — or the emotional pull of giving a Group of Five conference school that elusive first shot in the playoff.

“The committee has great respect for Cincinnati,” CFP selection committee chair Gary Barta, the athletic director at Iowa, told ESPN’s Rece Davis. “The win at Notre Dame is a really impressive win. When you look at their schedule and who they played after that, most recently in the last two weeks, a 2-6 Navy team and then a 1-7 Tulane team with a freshman quarterback starting, looking at the whole picture we feel six is the right place for Cincinnati.”

Barta is right that the Bearcats have not looked like a playoff team the last two weeks, but they still have the third-best win this season using these rankings. In this system, a team like Cincinnati simply has zero margin for error, and it was docked by not blowing out sub-par American Athletic Conference opponents in a way that Alabama was not negatively affected by barely beating a Florida team that is struggling to tie its own shoelaces at this point of the year.

Oh, and the Crimson Tide, handed a No. 2 ranking by the committee as a lifetime achievement award, also were forgiven for losing to a Texas A&M team that lost back-to-back games to Arkansas and Mississippi State before taking down Alabama.

One side note for USC fans: While Cincinnati and head coach Luke Fickell were clear losers Tuesday, the Trojans and athletic director Mike Bohn were winners.

Fickell is bent toward staying at Cincinnati or in the Midwest due to his deep family roots in Ohio, but if the Bearcats aren’t taken seriously this year after nearly beating Georgia in last year’s Peach Bowl and knocking off the Fighting Irish, it’s just not going to happen. He can hope that changes over time with the school’s impending Big 12 move and predicted playoff expansion, but can he really afford to wait it out when a top-five job like USC is calling his name?

Bohn certainly has a new talking point in any discussions with Fickell or his camp.

At first glance, the Ducks should be elated to be included in the top four. Hey, if the CFP was setting a bracket today, Oregon would receive the Pac-12’s first invite since Washington in 2016! The problem is that so much can happen in the next five weeks, and odds are, most of it won’t help the Ducks.

The first clue came from Barta’s admission that Nos. 3-9 did not have much room between them. That means Alabama, even with a loss, is being viewed as significantly better than everyone but No. 1 Georgia. The Ducks desperately need the Bulldogs to beat Alabama in the SEC championship game, but if it’s a close defeat Alabama will receive consideration for the playoff with two losses. Sadly, that’s just how this works.

The Ducks’ major issue is that they are unlikely to play another top-25 team. They will need to win convincingly against Washington, Washington State, Utah and Oregon State in order to tread water as competitors pad their resumes.

For now, Oregon’s head-to-head win over No. 5 Ohio State in Columbus is keeping them above the Buckeyes, but expect the Big Ten champion (either Ohio State, No. 3 Michigan State or No. 7 Michigan) to jump the Ducks because their schedules are backloaded with big games.

Oregon also would not be able to hold off No. 8 Oklahoma if it runs the table with wins over No. 11 Oklahoma State, No. 12 Baylor, Iowa State and likely the Cowboys or Bears again in the Big 12 title game. The Ducks need chaos to overtake the Big 12.

Just imagine how tough it would be for Oregon if the Atlantic Coast Conference’s best team was a normal Clemson outfit instead of No. 9 Wake Forest?

As good as it felt for West Coast football fans seeing Oregon at No. 4, the Ducks are going to have to hold on for dear life to make the final bracket. That reality should be in new Commissioner George Kliavkoff’s mind as playoff expansion talks heat up in the coming days. In regard to the debate about eight or 12 teams, the Pac-12 needs all the access it can get to overcome the committee’s outsized respect for the SEC and Big Ten.

The Sooners got what they deserved Tuesday after performing so unevenly this season against some very poor teams, but that doesn’t mean they’re going to be happy about being ranked behind four one-loss teams and Cincinnati.

Oklahoma has a bye this week, one final chance to get itself together for the stretch run with freshman sensation Caleb Williams starting at quarterback. If the Sooners are good enough to make the playoff, they’ll certainly have a chance to prove it at Baylor and at Oklahoma State in what is sure to be full-on “Bedlam.”

The Fighting Irish can’t have expected to be ranked much higher the way they’ve played. But, given the fact they won’t have any top-25 opponents in their final four games, there is no amount of chaos that could vault them into the playoff.

This is one of those years where I think it would benefit Notre Dame fans and players to be in a conference and have something to compete for beyond a national championship.

I couldn’t help but think as the rankings were announced Tuesday how much fun it would be if USC and UCLA were in the conversation.

How could it be that eight years into the playoff era no school from Los Angeles has been invited?

Well, we know the answer to that, and it’s a painful one for legions of diehard fans. But USC is addressing the problem as we speak, searching for its next head coach, and UCLA athletic director Martin Jarmond could be joining Bohn on the prowl soon enough.

It’s long past time for L.A. to be a force in college football again.