Bradley Cooper has mastered the fine art of geekdom 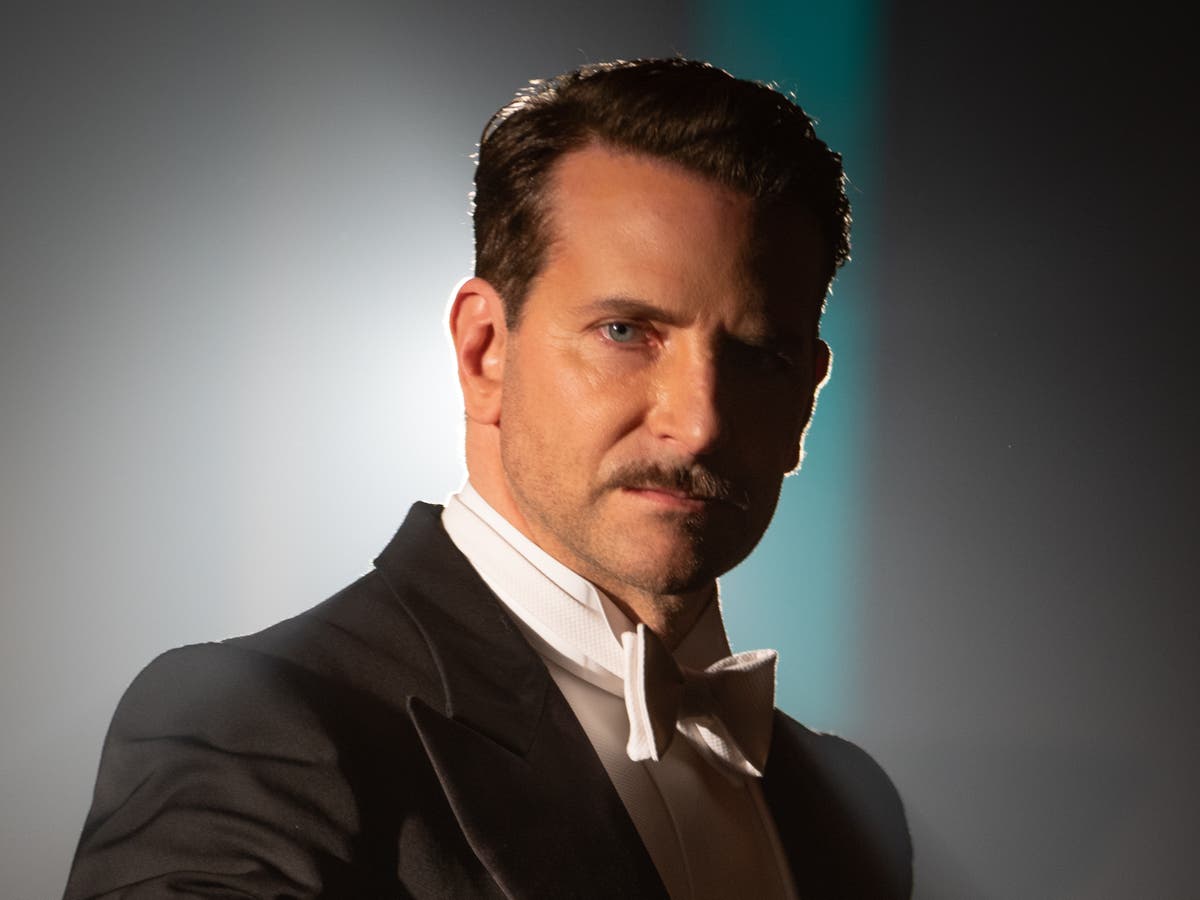 A circus “geek” is a man who has lost all his self-respect, a desperate, pathetic creature, driven wild by grief or booze. He is kept alive like an animal in a cage and let out only so paying customers can see humanity at its most degraded. Feed him a live chicken and he’ll eat it raw. Come close to him and he will snap at you.

Stanton “Stan” Carlisle, the con artist played by Bradley Cooper in Guillermo Del Toro’s new thriller Nightmare Alley, is fascinated by the “geeks”. Could he ever fall that low himself? That is clearly the question he is asking when he stares with such fascination at one of the lost souls early in the movie. He is a thoroughly despicable figure himself, a low life who betrays everyone he comes into contact with.

Nightmare Alley is the latest in a long line of movies in which Cooper, one of Hollywood’s most charismatic leading men, has portrayed characters who fall a long way on the dark side. The actor seems drawn to dysfunction. He relishes playing alcoholics, crooks or manic depressives: anyone suffering from post-traumatic stress or consumed with self-hatred.

In the remake of the noir classic, which is set in the Depression era, everyone realises that Stan is a bad piece of work. The Tarot card reader Zeena the Seer (Toni Collette) senses it instantly but is attracted to him nonetheless. The psychiatrist Dr Lilith Ritter (Cate Blanchett), herself a deeply corrupt figure, sees it too. There is a wonderful scene in which Cooper and Blanchett eye each other up with a mixture of lust and loathing. “I know you’re no good because… neither am I,” he whispers to her, recognising his own twisted reflection in her.

There’s a strain of masochism to Stan. Even as he exploits everyone around him, he half yearns to be found out – to be exposed as the fraud, creep and imposter that, deep down, he feels himself to be.

The downside to playing such unsympathetic protagonists is that you risk scaring the audience away. In the US, cinemagoers have largely shunned Nightmare Alley in favour of the new Spider-Man movie, which has a far more wholesome male lead in the shape of Tom Holland’s Peter Parker. Nonetheless, Cooper gives another of his immensely subtle, deeply layered performances in the film. We can understand exactly why Stan inspires such ambivalence in everyone he encounters. He has a little-boy-lost quality that even the hard-bitten carnival folk struggle to resist. But they’re not taken in by him. As Willem Dafoe, who plays the circus ringmaster, puts it, “There is something not right about this guy. This guy is a little off.”

Cooper shows a similar mix of charm and obnoxiousness, this time leavened with much more humour, in his other new film, Paul Thomas Anderson’s Licorice Pizza. He plays the real-life Hollywood producer and former hairdresser, Jon Peters, supposedly the role model for Warren Beatty’s arch-seducer in Shampoo (1975). Whereas Beatty’s character was engaging as well as libidinous, Cooper’s Jon Peters is an unreconstructed sleazeball. He tries to seduce every woman who crosses his path, including the far younger Alana (Alana Haim) when she is behind the wheel and so can’t easily avoid him. At one point, he is shown accosting female passers-by on the street, his lechery unbounded.

Look at Cooper’s career and you realise that he has become a major star while rarely playing sympathetic or conventional leading men. “The camera loves him… he reminds me a bit of Paul Newman, particularly around the eyes and in the way he has this suaveness but also this quick intelligence,” Liam Neeson said to The New York Times about co-starring with him in The A-Team (2010). The talk then was all about Cooper’s “smoothness and sex appeal”. He had just had a huge hit playing the rough-edged, ne’er-do-well school teacher Phil Wenneck in outrageous frat boy comedy, The Hangover (2009), directed by Todd Phillips.

The assumption then was that Cooper (whose early credits included roles in Sex and the City and Wedding Crashers) would graduate into the kind of leading man roles that Tom Cruise or Matt Damon were then playing. Cooper was the next in line. He would go on to star as spies and action heroes. That, though, wasn’t the direction he followed at all. Cooper clearly much preferred tackling characters on the margins. He had told journalists that he was first inspired to become an actor after watching John Hurt as the misshapen hero in David Lynch’s The Elephant Man (1980), a role he later played successfully on stage. Unlike Hurt, he didn’t rely on prosthetics or make-up to transform himself into the crooked, malformed Victorian circus freak (and disability campaigner), Joseph Merrick. Instead, the actor twisted his limbs and his features, stumbled and grimaced.

“Cooper makes you believe in the romantic sensibility that existed inside Merrick’s distorted frame… the production makes you long to see Cooper in challenging classic roles,” enthused veteran theatre critic Michael Billington when The Elephant Man was staged in London’s West End in 2015. “Wonderful, and very moving,” and “Bradley Cooper reminds us some stars can act,” wrote other British critics.

By then, the fast-rising star was already giving the impression that he was doing everything he could to avoid conventional romantic leads. After all, he was a graduate of the famed New York Actors Studio, the alma mater of “method” actors from Marlon Brando to Al Pacino who loved to show their inner anguish on screen.

The characters Cooper has chosen to play invariably have deep-rooted flaws and insecurities. In the hit remake of A Star is Born (2018), which he also directed, he was a magnetic and good looking rock star but also an alcoholic and drug addict who ended the movie by taking his own life. In Silver Linings Playbook (2012), in which he starred opposite Jennifer Lawrence, he was a divorcee suffering from bipolar disorder. In Burnt (2015), he was Adam Jones, the dashing but unhinged Anthony Bourdain-like chef, struggling to cope with addiction issues.

One film that fully demonstrates Cooper’s huge range is Neil Burger’s Limitless (2011). He is cast as Eddie Morra, a penniless would-be novelist, suffering from writer’s block, living in a dingy apartment and incapable even of paying his rent. His girlfriend (Abbie Cornish) dumps him. He is at the bottom of the pile when an old acquaintance he meets by chance in the street gives him a pill that enables his brain to function at maximum capacity. He tidies himself up, finishes his novel in four days, becomes a Wall Street wizard, reunites with his girlfriend and turns into a hard-fighting, hard-drinking, thrill-seeking man about town.

It’s a hackneyed idea, yet another reworking of the Jekyll and Hyde and Nutty Professor conceit of the nerd turning into the alpha male/Ubermensch. Few other actors, though, could have handled the transformation with the same ease and grace as Cooper. He is equally convincing as the needy, self-pitying nobody who starts the film and as the master of the universe type he becomes.

That duality is there in many of Cooper’s subsequent roles, including Nightmare Alley. He is the outsider who is also one of the boys; the folksy everyman turned killing machine in Clint Eastwood’s American Sniper (2014); the rogue FBI agent as corrupt as the con artists he is ostensibly investigating in American Hustle (2013).

Cooper may have voiced Rocket the Raccoon in the Guardians of the Galaxy series but hasn’t otherwise sold out. He has a burgeoning career as a producer of films like War Dogs (2016) and Joker (2019) and he recently signed on to direct and appear in a new Netflix biopic about the West Side Story composer, Leonard Bernstein. He is not exactly a reluctant movie star but, throughout his career, he has always stayed in touch with his inner geek. That is why even when films like Nightmare Alley tank at the box office, his credibility isn’t dented. For every self-respecting method actor like Cooper, the failures are always as important as the successes. You learn far more from humiliation than you ever do from triumph.

‘Licorice Pizza’ is out now. ‘Nightmare Alley’ is out on 21 January