Blackpink and the Limits of K-Pop Maximalism 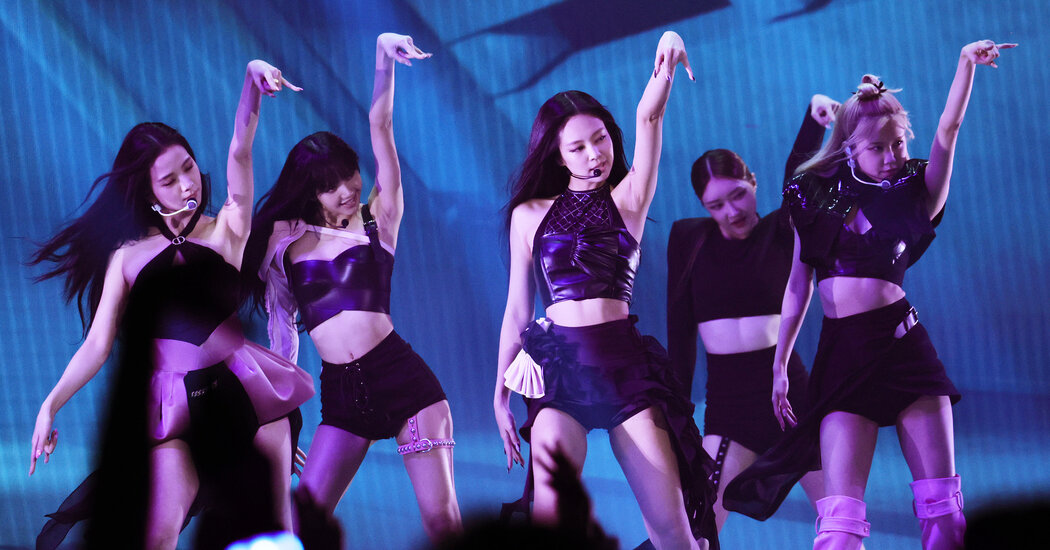 As K-pop was broadening its global ambitions in the late 2000s and early 2010s, it was also expanding its appetite, becoming the hungriest pop music scene on the planet. It feasted especially on American pop, hip-hop, R&B and dance music, alchemizing it all into a maximalist fantasia, creating an aesthetic of absurdist excess that became, for a while, that world’s most progressive and most popular approach.

Acts like the YG Entertainment girl group 2NE1 thrived in that environment (along with its boy band compatriots BigBang), and helped set the stage for the genre’s worldwide takeover. Here was music — largely masterminded by the producer Teddy Park — that was curious, chaotic and cocksure. Other pop scenes seemed to dematerialize in its wake.

Blackpink, the next-generation YG girl group that debuted in 2016, seemed poised to carry that torch with the early success of singles like “Whistle,” “Ddu-Du Ddu-Du” and “How You Like That.” But by the time of its first full-length release, “The Album,” in 2020, the group’s music had become somehow more bombastic and more brittle than that of its predecessors, and the blueprint was showing its seams.

“Born Pink,” the second full-length Blackpink album, is in theory an opportunity to innovate, both for the group and for the genre itself. And it finds Blackpink — Jennie, Jisoo, Lisa, Rosé — at a crossroads: whether to continue its high-energy sonic collision; whether to fully embrace the English-language market; whether to dismantle its own house.

The first single, “Pink Venom,” is classic Blackpink — which is to say, pandemonium stitched so tight it achieves its own internal logic, both caffeinated and fatiguing all at once. Jisoo’s singing is as rich and austere as ever, and Jennie’s rapping is flexible and dotted with clever little filigrees.

“Pink Venom” plays like a theme song, more a jingle for the group than a pure musical statement. And it is something of a relief that the album doesn’t over-index on this approach, which has become a genre default.

“Born Pink” is occasionally galvanic, and occasionally iterative. When the group does push into new territory — or more accurately, unshackles itself from familiar ground — it doesn’t leave much of an impact. “The Happiest Girl” is a brittle melodrama of a piano ballad, and “Yeah Yeah Yeah” is a cheerful ’80s pop simulacrum that also nods to the Weeknd and Daft Punk.

Four of the songs are wholly in English, including “Hard to Love,” performed in full by Rosé (Blackpink is far more effective in this idiom than, say, BTS). And there’s cursing as well — not new for the group, but still a pointed gesture.

Densely stacked production remains central to the group’s mission and positioning, especially on the songs Park worked on. And throughout the album, there is intense sonic layering, with G-funk swirls and classical music string samples and references that are so buried that they might not even be there at all. “Still Tippin’” on “Typa Girl”? “Mighty D-Block (2 Guns Up)” on “Pink Venom”? “My Baby Takes the Morning Train” on “Yeah Yeah Yeah”? Who can say?

The smorgasbord of Blackpink, or 2NE1 before it, was at least in part a reaction to an earlier wave of girl groups that helped establish K-pop’s ambitions and scale, but whose dalliances with Western influences were more glancing.

Last month, one of the crucial acts of that era, Girls’ Generation, released a new album, “Forever 1,” 15 years after its debut. More than a decade ago, Girls’ Generation was among the first, if not the first, K-pop acts to release an album on an American major label. But its ambitions aren’t as relentless as Blackpink’s.

“Forever 1” is a refreshing throwback to a less agitated moment in the genre. The production is largely mellifluous and bright, and the singing is sweet and uncomplicated. It is redolent of an era in which K-pop was still establishing its own grammar, before it voraciously consumed everyone else’s. There are light flickers of hip-hop and new jack swing, as on “Seventeen” and “You Better Run.”

But in the main, this is classicist music — the sheer brightness of the piano on “Closer,” the light sashay on “Summer Night.” It posits the music not as a world killer, but as a respite and a dream.

As compelling as “Forever 1” is, it doesn’t feel of the moment, more like a rediscovered memento. That’s especially clear when it’s contextualized not simply alongside Blackpink, but also the intriguing wave of girl groups that has arrived in that group’s wake, identifying the contours of its success and building upon them.

Of those acts, Aespa has been the most vital in recent years, and its recent EP, “Girls,” is one of the year’s most impressive K-pop releases precisely because of its dual mastery of the intricate and the elegant. That’s captured in its closing run: “Black Mamba,” a warrior stomp that channels flamboyant early 2000s pop, the throwback up-tempo ballad “Forever,” then “Dreams Come True,” which feels like a nod to K-pop’s earliest engagements with R&B.

By contrast, Itzy stands out for its resolute quirk. Its recent “Checkmate” EP continues the group’s boisterous mayhem, with vocals that are intensely alert and jubilant, and production that seems to be bubbling in real time. “365” recalls industrial or avant-garde club music, and “Racer” sounds like Disney theme park music run through a glitter factory.

Finally, and perhaps most promisingly, there’s NewJeans, which has just released a stellar self-titled debut EP that’s utterly cool and poised. The production is sensuous and restrained, and the singing is both lustrous and unhurried.

On the surface, NewJeans harks back to an earlier, pre-2NE1, unhectic moment in K-pop. But its submerged references are deeply modern, especially the detour into New Jersey club music on “Cookie.” NewJeans deploys its contemporary reference points in service of a throwback idea, though. Or perhaps more pointedly, it’s learned all of the lessons the world has to offer, and is bringing them back home.