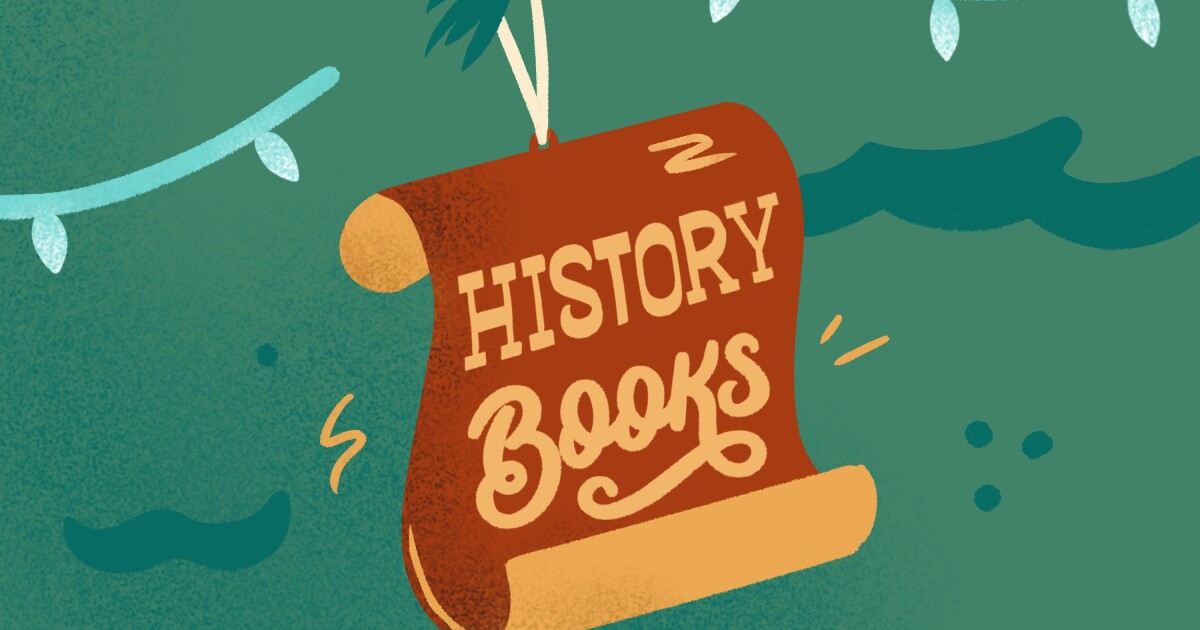 This is part of the L.A. Times 2021 gift guide. If you buy books here, The Times may earn a commission from Bookshop.org, whose fees support independent bookstores. See the full guide here.

It’s commonly assumed that some books, especially bulky nonfiction, are designed to be gifted on a holiday, given pride of place on a bookshelf and never opened. For those who have other plans, the following 10 books are the opposite (with perhaps one exception). They are enticing, pleasurable and insightful — stories of people, places and ideas at least as rich in the telling as fiction can be. Read on for books that demand to be read.

Mark Harris — an accomplished film writer and now, clearly, a born biographer — takes on one of Hollywood’s hardest directors to know, a director of great presence who always retained some mystery of the inner soul. Harris reveals Nichols to be a man of awesome social intelligence whose success came down to cultural timing. Was it luck or talent? Why not both?

Empire of Pain: The Secret History of the Sackler Dynasty

As we debate how well Hulu’s “Dopesick” captures the opioid crisis and one family’s complicity in it, one thing is for sure: Patrick Radden Keefe’s deep study of the Sacklers already did it on the page. He nails the secretive dynasty behind Purdue Pharma dead to rights — and tells a bleak story in the process.

On Freedom: Four Songs of Care and Constraint

The trick to Maggie Nelson — the reason she is adored as an essayist — is that she is fearless in her choice of topics and scrupulously open-minded in exploring them. So it goes with this book divided into four different realms of “freedom” (art, sex, drugs and climate), which sets out to reclaim America’s most abused word and concept — and succeeds.

The Dead Are Arising: The Life of Malcolm X

So much had already been written by and about Malcolm X that another biography — albeit one toiled over for nearly 30 years by Les Payne and finally finished, after his death, by his daughter, Tamara — seemed superfluous. But the Paynes add a great deal to the record, poetically recounting the life that led Malcolm X to heroism (and death) without withholding the truth.

Seek You: A Journey Through American Loneliness

Melancholy is nothing new for graphic stories (Daniel Clowes, anyone?), but Kristen Radtke achieves something a little more emotionally complex in this meditation on American loneliness. She shares studies and anecdotes in crisp, economical prose, but her drawings speak a different language, something like Edward Hopper’s — a darkness that consoles us.

How the Word Is Passed: A Reckoning With the History of Slavery Across America

Why are some partisans lately so intent on limiting what students learn about our racist past and present? Clint Smith’s travelogue of the places where slavery is taught or misremembered or forgotten couldn’t have arrived at a better moment, visiting monuments and taking tours to construct a narrative of how we succeed and fail at learning from our collective sins.

Always Crashing in the Same Car: On Art, Crisis, and Los Angeles, California

To love L.A. is sometimes to hate it, and to succeed here is sometimes to fail. Matthew Specktor, who knows a lot about all of it, explores the lives of Angelenos who wove between success and flameout — Hal Ashby, Thomas McGuane, Tuesday Weld and others — in search of lessons for how to live creatively in the shadow of winner-take-all Hollywood.

Trejo: My Life of Crime, Redemption, and Hollywood

Co-written celebrity memoirs are not, on the whole, the most promising genre. But Danny Trejo is no typical celebrity, and his journey from gangs to prison to character actor to icon is one only he can properly narrate — with the help of his buddy Hollywood veteran Donal Logue. The untold nuggets are fascinating, but the whole trip is soul-affirming, indelible.

Cities are often celebrated for their order, but Mexico City native Juan Villoro understands that the magic of any metropolis, particularly his own, lies in chaos. His collection of essays cuts a panoramic swath across every aspect of the world’s largest Spanish-speaking city: tire vendors, raunchy singers, luchadores, strange communal obsessions and so much more.

OK, maybe Bob Woodward and Robert Costa’s exhaustive chronicle of the Trump/Biden transition is one of those books destined to sit unfinished. But face it: It’s the perfect gift for political completists, and if you’re handy with the index, there are more than enough revelations and climactic scenes to make Woodward’s last (?) Trump book worth a long read.