‘Behind the Table’: A special podcast series from ‘The View’ 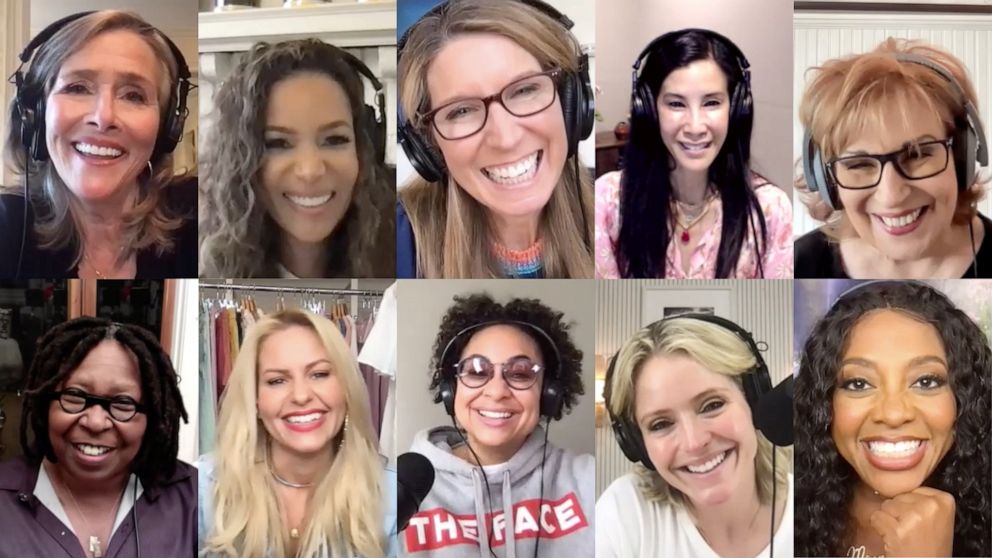 “The View” is taking an extraordinary look inside the talk show that has been making headlines since Barbara Walters first uttered the phrase, “I had this idea for a show,” with its new podcast, “Behind the Table.”

In 1997, the legendary Walters set out to create a show that celebrated strong women and their individual views. Twenty-five years later, the Emmy-winning talk show is celebrating its television success with the special podcast series.

Listen to the trailer for “Behind the Table” HERE:

With new episodes every Tuesday, “Behind the Table” will showcase candid and revealing conversations, never-before-heard stories, firsthand details behind headline-making controversies and moments that firmly cemented the talk show in pop culture history from the incredible women who have had a seat at the notorious Hot Topics table.

Meredith Vieira, Sherri Shepherd, Lisa Ling, plus other former and current co-hosts join to discuss exclusive interviews with celebrities, newsmakers and politicians, as well as behind-the-scenes stories and their Twitter-trending conversations on-air.

New Episode: Abby Huntsman & Sara HainesAbby Huntsman joined “The View” in season 22 and was the show’s 22nd co-host. Although she and Sara Haines never co-hosted at the same time, they sit down and discuss the many things they have in common. Abby discusses her experience being pregnant on the show and welcoming twins. She also shares how being a co-host helped her find more confidence and changed her life.

Jedidiah Bila was a co-host with Sunny Hostin for season 20 of “The View” and although they disagreed on many issues, they became good friends. On this week’s episode of “Behind The Table,” Jedidiah shares how she credits Sunny and Whoopi for helping her discuss racial issues and they look back on the fun — and some light-hearted terror for Sunny — they had when “The View” took a trip to Walt Disney World.

Later, Jedidiah discusses her biggest regret from being on the show and how she felt leaving her co-host spot.

Debbie Matenopoulos and Joy Behar were both original co-hosts and helped launch “The View” with Barbara Walters, Meredith Vieira, and Star Jones in 1997.

On “Behind The Table,” Matenopoulos talks about getting the job at 22 years old and looks back on how it all started when they auditioned together for the show. Matenopoulos also discusses what it was like when “Saturday Night Live” started doing parodies of her and she tells Behar how she really felt when she was let go after one season.

Raven and Candace became famous as successful child stars and they both joined the show as co-hosts in 2015, sharing the table with Whoopi Goldberg, Joy Behar, Paula Faris, Michelle Collins, and Sara Haines. They both made the decision to leave the show after one season.

Sara Haines talks with them about all the ups and downs Raven and Candace experienced together – from their toughest moments, to the pressure they felt to speak up for certain communities, and how the 2016 election changed everything for them.

Oct. 5: Nicolle Wallace & Whoopi GoldbergAfter a successful career in politics, Nicolle Wallace joined The View in 2014. She and co-host Whoopi Goldberg, who are still close friends today, discuss the impact co-hosting for one season had on her life, her relationship with fellow co-host at the time Rosie O’Donnell, and the advice show creator Barbara Walters gave her after she got fired.

Lisa Ling joined “The View” in 1999 at just 26 years old and spent three years on the panel — she and co-host Sara Haines talk about their time on the show. They share their fond memories of the show’s creator Barbara Walters and look back on some of the craziest moments on air!

Listen to Lisa discuss the one moment she regrets on the show and listen to Sara reflect on her early days guest co-hosting the show and her decision to come back on the panel after leaving in 2018.

Sherri Shepherd co-hosted “The View” for seven years and she sat down with co-host Sunny Hostin to share about the ups and downs of her time at the Hot Topics table! From being hired after guest co-hosting on the epic Rosie O’Donnell and Elisabeth Hasselbeck split-screen day to revisiting her infamous “Earth is flat” comment, Shepherd gets candid on how the show made a lasting impact on her life and the lessons she learned from show creator Barbara Walters.

Though the two were never on the panel together, they discuss their friendship and Hostin shares why she commended Shepherd for her openness when she became a part of the show.

As two of the original five co-hosts on “The View” in 1997, Meredith Vieira and Joy Behar have seen it all. From being hired by Barbara Walters to leaving the daytime talk show, they discuss how their experience on the show has changed them and reflect on how the show has evolved since its inception.

Every episode of ABC’s award-winning talk show “The View” is available as a podcast! Listen and subscribe for free on Apple Podcasts, Google Podcasts, TuneIn, Spotify, Stitcher or the ABC News app.