Anyone can make a Día de Muertos altar. Here’s how 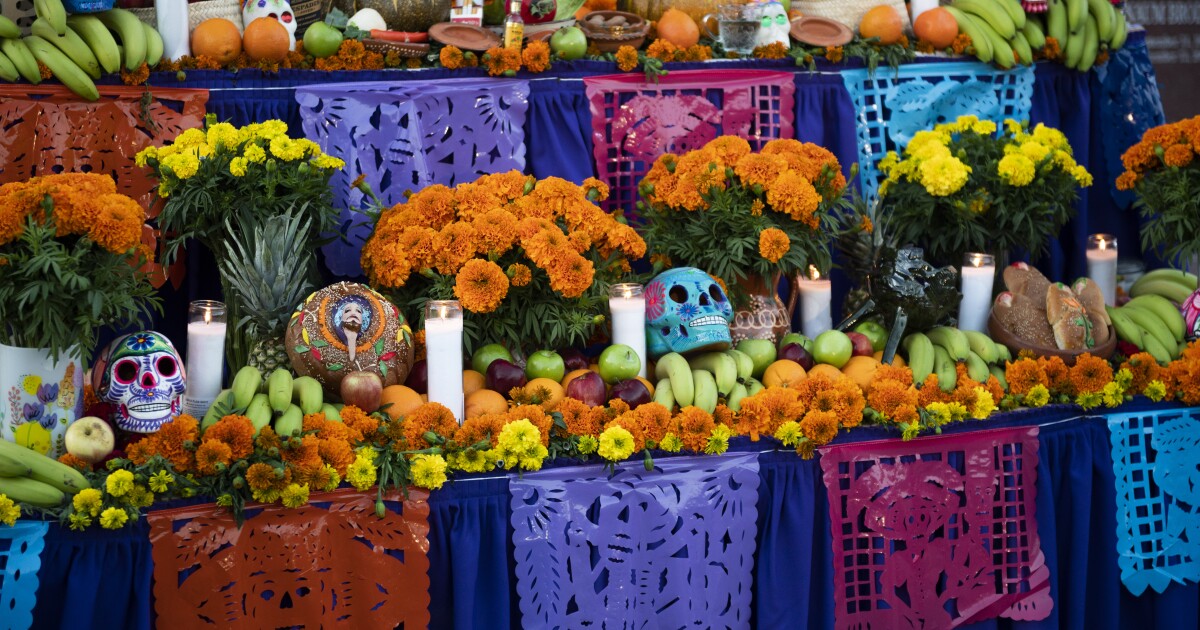 Our seasons follow a cycle. Right now, we’re in the season of death.

The days are shorter, the air crisper, the leaves changing. In spring, food is planted and animals are born; in summer they grow, in fall comes the harvest, and in winter things are dead. It’s not a coincidence that many cultures around the world have celebrations and ceremonies relating to death at this time of year. The dominant one in America is Halloween. But for many Southern Californians, it’s the season of Día de Muertos.

The holiday originated in Aztec culture before Spanish colonizers and the Roman Catholic Church arrived.

“The Aztecs did honor the dead with celebrations and rituals during what was the harvest season. And they did see death as sort of like the start of a new life or a new cycle,” said Angie Jimenez, the altar program director for the Día de los Muertos celebration at Hollywood Forever, which takes place Saturday.

Catholicism has a knack for absorbing holidays into its liturgical calendar — it’s how we ended up with Saturnalia trees at Christmas and rabbits and eggs at Easter — and something like that happened in Mexico with this holiday. Día de Muertos falls on Nov. 1 and 2 — which, not coincidentally, are All Saints’ Day and All Souls’ Day in Catholicism.

“Versions of [Día de Muertos] have been around for thousands and thousands of years. But the version that we are familiar with happened — like many things in Mexico, it’s a mixture of Indigenous traditions and also of Catholic Church traditions,” said Lalo Alcaraz, a two-time Pulitzer Prize-nominated political cartoonist who served as a consultant for the Oscar-winning Pixar film “Coco.” “Mexico’s good at mixing things together.”

Today, Día de Muertos is celebrated by Mexican Catholics and many others in Mexico and the United States. It’s enjoyed a resurgence in Southern California since the 1970s, when the artist group Self Help Graphics & Art organized a public celebration in Los Angeles. In 2017, “Coco” helped introduce a new generation to its tenets and symbolism.

The holiday comes from a cultural point of view that sees death not as a finality but as moving on to the next stage. Death doesn’t have to necessarily be sad or scary. Our lives have seasons and cycles, like everything else. On Día de Muertos, souls that have moved on to their next season have a chance to cross back and be with the people who loved them. You don’t get to share the same realm as them year-round, but you get to share dinner and drinks for a night.

People “always say, ‘What’s with Mexicans and death?’ Mexicans confront death,” Alcaraz said. Celebrating Día de los Muertos “is a healthy way of connecting with your ancestors, honoring them and placing yourself in the lineage.”

Conversely, lots of Americans are super weird about death.

Tok Thompson is a professor of anthropology at USC whose work has focused on folklore, mythology and Indigenous groups. “We don’t have a good relationship with death in the United States,” Thompson said. “And that’s not true everywhere. You can have a real distinction between bad deaths, when people die young, and good deaths, where you die at 95 surrounded by your family. … We don’t have that concept of the ‘good death’ in modern American culture.”

We’re encouraged to get over it and move on and not dwell in the past. Día de Muertos asks us to do the opposite: remember our loved ones, visit their graves and say hello, and celebrate them and the love we still feel for them.

One way to do that is with an altar, or ofrenda.

How to make an ofrenda

You can build an altar in your home to a relative, a friend, a person who was meaningful to you — even if you didn’t know them personally, such as an author or celebrity — or build ones that are remembrances to groups of people. Last year, altars were built for victims of COVID-19. Alcaraz said he expects to see more of those this year.

The altar is the portal from which the person crosses back into the world of the living, said Aldo Cruz, an altarista (altar designer and teacher) who’s worked with the Hollywood Forever event since 2006 and first learned about altar-building watching his mother in his childhood home in Oaxaca. (The interview with Cruz was conducted in Spanish and translated to English by Karen Garcia.) Different regions and families may decorate them in different ways. This is something you are doing in your own space and your own home, so there really isn’t a “wrong” way to build your altar, but there are elements you should keep in mind and try to incorporate.

Time and space. Building the altar should be a festive family occasion, Cruz said: “When we make the altars, we often do it together, so it’s a happy time when we design the altar together and remember our loved ones — it brings us together.” It doesn’t have to be in a specific spot in your house, and your ofrenda doesn’t need its own dedicated table. A corner of a table or shelf works.

The elements. You want to represent what Cruz called “life’s elements: water, wind, fire and earth.” For water, that can be a cup of water to quench the spirits’ thirst after their journey, or sometimes the deceased’s favorite drink. Wind can be represented by papel picado, a colorful cutout paper banner that moves in the breeze. A candle represents fire and also illuminates the path that guides the souls to the altar. Earth is represented by fruits, dirt and flowers — specifically cempasúchiles, or marigolds. They’re considered “the flower of the dead” because once the blooms are cut, they quickly die — a metaphor for the journey from the realm of the living to the realm of the dead, Jimenez said. Copal (incense) represents the transformation from the physical to the supernatural.

Some other items to consider, though not all altars have them:

Memorial items. Place photos of the person or people you want to remember and be visited by. You should also have a few of their favorite things waiting for them. Did the deceased love the Dodgers? Morrissey? Lotto Scratchers? Have some mementos waiting. Toys are traditionally placed on ofrendas for children.

Food and drink. Día de Muertos is about your loved one coming back to share a meal with you, so prepare a feast. Pan de muerto is traditional. But it can be anything edible. And the food and drinks are for the living, so make something you’ll want to eat as you celebrate. Alcaraz said he brings coffee and Winchell’s doughnuts to the graves of his mom and aunt every year.

You don’t have to be from Mexico or have any Mexican heritage to build an altar or celebrate Día de Muertos, Alcaraz said. It’s a holiday about love and celebration and honor, so if you participate in that spirit, you’re doing it right. He compared it to food websites that act like no one’s ever thought to combine mango and chile powder before or would suggest putting peas in guacamole.

“It’s cool to like other people’s culture. Just don’t act like you invented it and start explaining certain cultures, explaining to me about how you do Day of the Dead so much better than that,” Alcaraz said. “Don’t pretend that you invented it; don’t pretend that you do it better than anybody. Try not to wear Día de los Muertos as a costume. … It’s really about remembering how great that person was, what would make that person happy. And that makes you happy. It gives you a connection, a warm connection to that person so they’re not forgotten.”

Focus on your loved one — and on the rare opportunity you have to spend time with them again. In a year marked by grief and isolation, Día de Muertos can be a chance to process and remember.