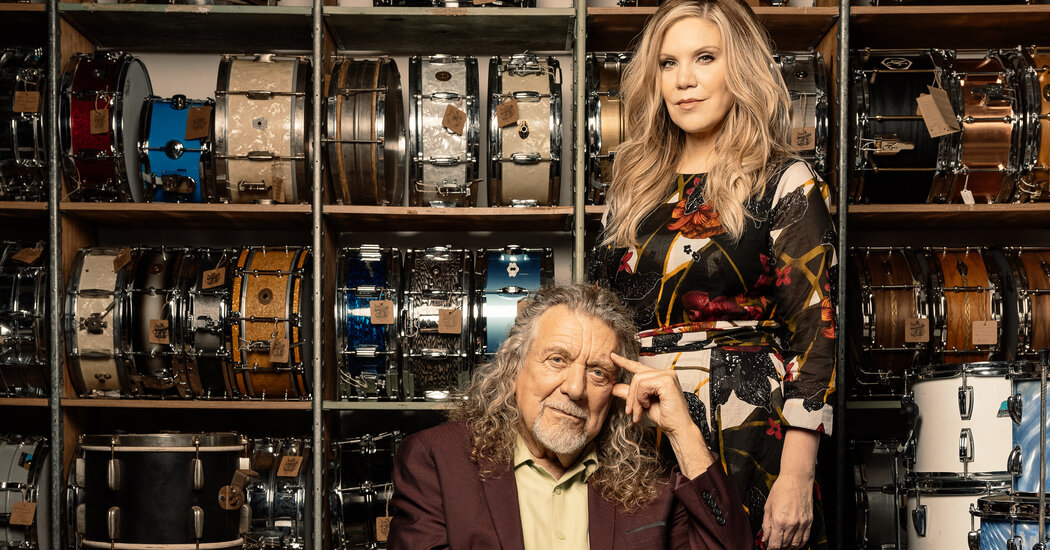 They stripped songs down to just lyrics and melodies, and rebuilt them intuitively in the studio, often around sparse, subtle beats from Bellerose. They shifted “Trouble With My Lover” from a major to a minor key, and Krauss trades Harris’s New Orleans soul resilience for a neo-Appalachian plaint, lingering over the song’s loneliness and hints of betrayal.

Krauss chose “Going Where the Lonely Go,” a doleful ballad that Merle Haggard released in the 1980s. Plant seized the chance to record a soul song he had been singing since his teens: “Searching for My Love,” by Bobby Moore & the Rhythm Aces. He also brought material from Britain’s 1960s folk revival: Bert Jansch’s stoically intransigent “It Don’t Bother Me,” which brings out Krauss’s defiant streak; and Anne Briggs’s “Go Your Way,” a wife’s troubled farewell song to a soldier she may never see again.

At one of the album’s extremes, Plant unleashes his Led Zeppelin wail and echoes of “Kashmir” in “High and Lonesome,” a song that grew out of a studio jam session. Burnett and the rhythm section were toying with a Bo Diddley beat. Plant happened to have his book of potential lyrics with him. The title is a tongue-in-cheek country cliché; the song is not. It is equally biblical and bluesy, wondering, “If I should lose my soul, would you still care for me?”

At the other end of the dynamic scale is “The Price of Love.” The Everly Brothers’ own version is an exuberant two-minute, harmonica-topped stomp, though they’re singing about a cheater’s bitter regrets. Plant, Krauss and Burnett took the song down to half-speed and removed any distractions. The track opens with half a minute of near-ambience as instruments quietly drop in: a bowed bass drone, shakers, a distant fiddle, eventually a few guitar notes before the beat and chords solidify and Krauss arrives like an accusatory wraith: “You won’t forget her,” she warns. By taking their time, they concentrate the essence of the song. And as they did with “Raising Sand,” they calmly defy the impatience of 21st-century pop.

The song “kind of forms before your ears,” Plant said. “When people stick stuff on the radio now, I think you’re allowed like 16 seconds or even less before you’re actually hitting a chorus. But then again, we’re fishing in a different pool. In fact, we’re not even fishing. We’re just trying to swim.”