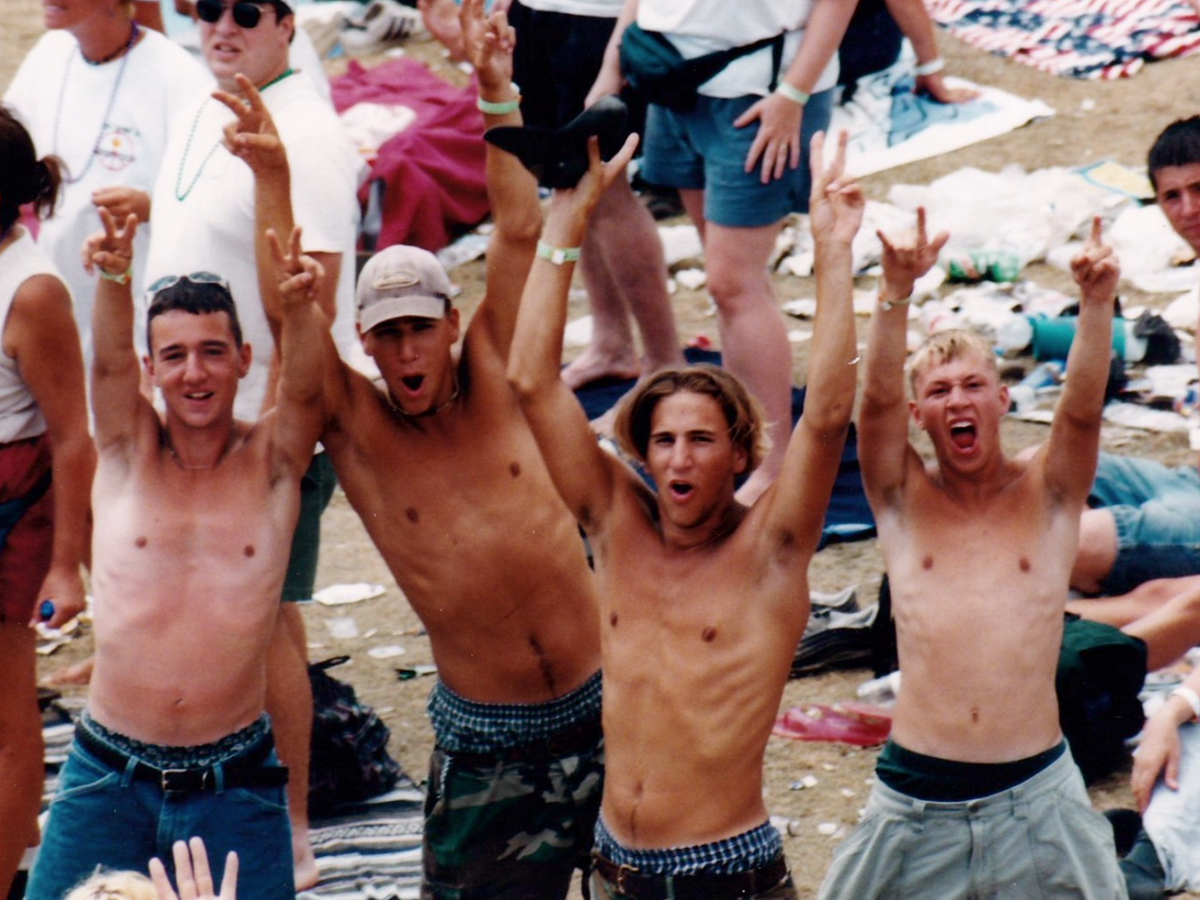 Netflix’s new three-part series on the absolute horrorshow that was Woodstock ’99 opens in an appropriately dramatic fashion. “Is this Bosnia?” asks one festival goer, as they peer through the wreckage of the three day event that was less “peace and love” and more “violence and arson”. The air is thick with the smoke of recently extinguished fires. Upturned porta potties sit among the ashes. Gigantic lighting rigs lay flat on the ground. If you thought the 6am scene at Glastonbury’s Stone Circle was messy, you ain’t seen nothing yet.

Trainwreck: Woodstock ’99 details an event that seemed set for disaster from the start. Michael Lang, who arranged 1969’s original Woodstock festival when he was just 24, was never overly keen to do another one. A 25th anniversary event in 1994 was a bust, with lax security and two onsite deaths. In an interview filmed before he died earlier this year at 77, Lang admits that he thought it was impossible to recreate that free and easy spirit of the late Sixties, when young people came together in the wake of Vietnam, to show there was a kinder way of doing things. It was, in fact, another disaster that convinced him to resurrect the festival – the Columbine school shooting of April 1999. Lang’s ambition was to bring young Americans together and show them a world free of violence, and that a peaceful way was possible. Unfortunately, the chaotic scene that played out seemed to be just as much the fault of the festival organisers as the punters. Now, 23 years later, they’re still refusing to take the blame.

Woodstock ’99 was a perfect storm of pissed-off, feral kids, oppressive heat and a production team that cared little for the welfare of the 250,000 people who’d bought tickets for the three-day festival. Unlike the bucolic 1969 version’s rolling grassy hills, Woodstock ’99 took place in the rather unscenic surrounds of a military base in Rome, New York in July 1999. Though temperatures of over 100 °F (38 °C) were predicted for the weekend, water and food was taken off attendees as they arrived on site. The base – a tarmac airstrip – was also severely lacking in shade. “Oh my god, there is a lot of asphalt,” recalls one of the production team, after seeing the location for the first time.

Also wildly different to the original festival was the line-up. Where Woodstock ’69 had the folksy stylings of Grateful Dead, The Band and Crosby, Stills, Nash and Young, Woodstock ’99 offered the mosh pit mayhem of Limp Bizkit, Korn and Kid Rock, all playing under the slogan, “It’s not your parents’ Woodstock”.

Watching Trainwreck: Woodstock ’99 has a peculiar familiarity. Though I wasn’t there, one month later I was at my very first festival. Reading 1999 played host to many of the same bands, including Red Hot Chili Peppers and The Offspring, and though there certainly wasn’t as much horrific violence, clips of teenagers running wild after dark definitely rang a few bells. As did mentions of mid-crowd groping. Footage of swirling mosh pits took me straight back to that grubby weekend in Berkshire 23 years ago, and made me glad to now be old and confident enough to tell wayward hands in a crowd where to go.

Sheryl Crow was one of the first acts on at the ill-fated Woodstock reboot, and already an aggressive element in the crowd started to make itself known, with men calling out to the star to “show us your tits”. This escalated throughout the weekend, with numerous sexual assaults and four reported rapes. Add to this a lack of trained security – a lesson that festival promoters should have learnt from, but which last year’s Astroworld tragedy proves they haven’t – and the young crowd were as dangerous as they were vulnerable. One of the most harrowing moments in the new documentary comes when we’re told of an incident during Fatboy Slim’s set in which a truck is commandeered and driven into the crowd. Someone then chillingly describes seeing a passed out and naked young girl in the back of the van, a man looming above her and buckling up his trousers.

Multitudes of women were groped in the crowd, and we’re shown horrible clips of them having to physically remove the hands of strangers from their breasts. Festival promoter John Scher does a terrible job of taking responsibility for such assaults. “There were a lot of women who voluntarily had their tops off, y’know,” he says, with a shrug. “And then you get in a mosh pit, you get crowd surfed – could somebody have touched their breasts? Yes, I’m sure they did. What could I have done about it? I’m not sure I could have done anything.” How about having security throw the men to blame out, John?! How about a zero tolerance policy to sexual harrasment? Try harder, John.

By the final night, the punters had become so disgruntled with the conditions – drinking fountains were contaminated with water from the toilets, causing cases of trenchmouth, and the price of bottled water had been hoicked to an outrageous $12 – that full scale anarchy was on the cards. When a rumoured secret Prince/Bob Dylan/Guns ‘N Roses set to close out the festival failed to materialise, Woodstock ’99 began to eat itself. One hundred thousand candles for an anti gun violence vigil were handed out without the knowledge of the fire marshall, which were used to start huge fires in the crowd. Trucks and tankers were also set ablaze.

Mob mentality quickly descended and merch stalls were looted, lighting rigs were pulled down, and ATMs smashed to smithereens. While the production staff barricaded themselves into their office, state troopers with batons and shields arrived to shut the festival down.

What’s interesting is, despite the failings of the staff, most of the punters interviewed in Trainwreck: Woodstock ’99 had a good time. A great time, in fact – something they say was heightened by the sense of chaos. I’m certain that the girl in the van and those who were harassed wouldn’t give the same answer, but for some of these kids, their first taste of freedom was eye opening. Even so, that’s still no excuse for the festival promoters refusing to be accountable for what happened at Woodstock ’99. And with Michael Lang dead and John Scher still convinced there was nothing he could do, it looks like a proper apology won’t ever materialise.

A Watermark, and ‘Spidey Sense,’ Unmask a Forged Galileo Treasure

There’s a New Billboard in Town, and You Can Walk in