A discussion of Asian and Black solidarity: ‘Wherever there’s a fight, that’s where I want to be’ 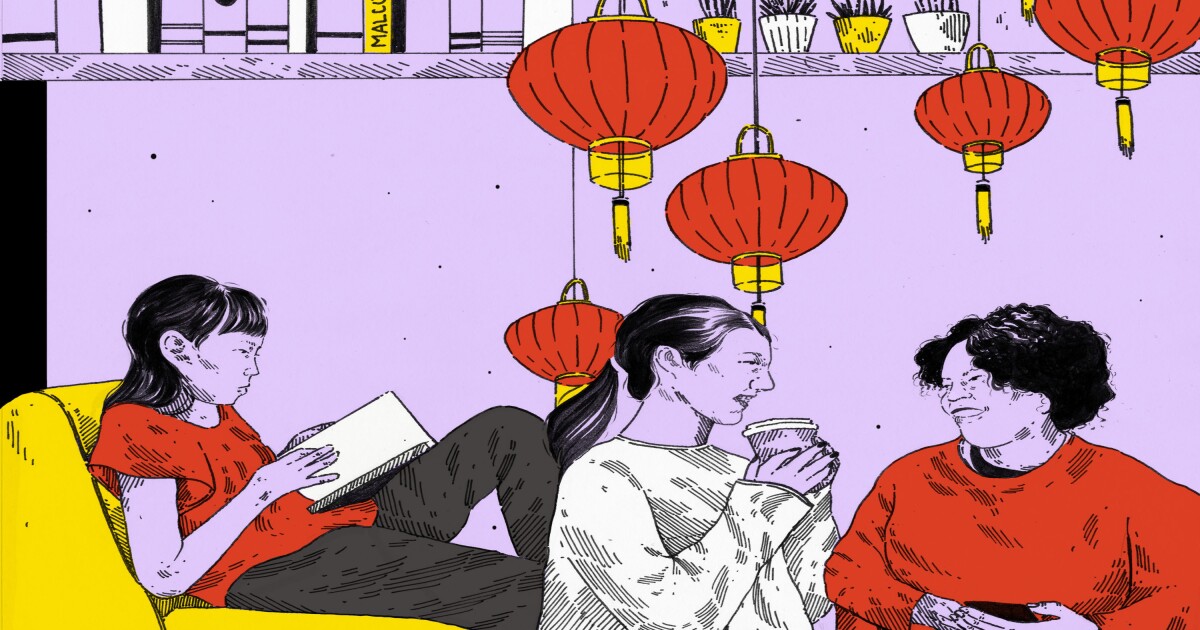 Renee Tajima-Peña and Melina Abdullah hadn’t met before they gathered in Crenshaw to have a candid conversation about Asian and Black solidarity for the L.A. Times.

Tajima-Peña is an Asian American history professor and the filmmaker behind the Peabody-winning 2020 PBS series “Asian Americans.” She and Jeff Chang recently produced the “May 19 Project,” a series of videos highlighting moments of solidarity between Asian Americans and other communities of color. May 19 references the shared birthday of Malcolm X and Yuri Kochiyama.

Abdullah is the co-founder of Black Lives Matter’s Los Angeles chapter and a professor of Pan-African Studies at Cal State Los Angeles. She grew up in Oakland, where her school was half Black and half Chinese.

“I think the world tries to frame it as conflict,” said Abdullah, of the relationship between Black and Asian communities in America. “But it hasn’t always been like that. There’s conflict and cooperation and solidarity. That’s always been a part of our relationship.”

What follows are lightly edited excerpts from their conversation.

Black and Asian communities in America are often portrayed as in conflict with each other — but that ignores the moments of solidarity, resistance and collective power. (Illustration by Diana Nguyễn / For The Times)

Abdullah: Space means a lot. When you talk about Black and Asian interactions in places like the Bay Area, well, of course, there’s a lot of interaction. Some of it is, you know, problematic. And some of it is really, really beautiful, because Black folks and Asian, specifically Chinese, folks occupy the same space.

My Oakland elementary school was 50/50, Black and Chinese. … And two houses over from where we lived, there was a very old Chinese woman who I loved and called grandma. I would spend at least once a week with her, we’d sit and drink tea and eat cookies, and she would tell me stories. So there were these beautiful interactions.

And then growing up in the ’80s, there were all of the martial arts movies. So the neighborhood kids would have little fake fights. [laughs] Which were problematic. But that’s what kids did, you know?

Tajima-Peña: My grandfather actually used to live here in Crenshaw. It was a Black and Japanese neighborhood because of red-lining. … And during the 1965 Watts uprising, Japanese American businesses were protected by African Americans because they were neighbors. So the community had a different kind of relationship.

I think it’s because the Japanese Americans were actually living there too. It’s not like they just had businesses there. They were living there.

Now sometimes conflicts are elevated because you have folks, particularly Asian folks, after the lifting of things like restrictive covenants, who can do business in neighborhoods where Black folks provide a customer base of financial support. But then they leave, so it’s not the same investment in the neighborhood in which they live.

So I think that’s the difference between the 1965 Watts uprising and the 1992 Los Angeles uprising after the beating of Rodney King, right? It’s a different relationship. So it’s important to recognize what it means to occupy space as co-residents, as neighbors, as opposed to occupying space where one group owns businesses and the other group is only seen as a customer base.

On Asian and Black communities being pitted against each other

Abdullah: It’s complicated. But I think it’s a narrative that’s mediated by white mainstream media that deliberately pits us against each other.

Tajima-Peña: That’s one reason Jeff Chang and I did this whole solidarity video series, because we started seeing all these viral videos of Black and brown assailants attacking Asians, particularly elders. … And then we thought, what’s really going on? People were even trying to figure out who’s posting all of this.

Because in a study, they found 75% of the assailants were white men.

Asian Americans are always the wedge. I mean, that’s been going on since the 1800s.

There’s the casting of Asian Americans as the model minority, and there’s the casting of Black folks as scary, uncivilized, the assailant. So even when we think about certain examples like in 1992, Latasha Harlins, this little girl who goes into an Asian-owned store to buy some orange juice, she winds up being followed and murdered by the Asian storekeeper. Even now, when we think about how that story is written, it’s written in such a way that Latasha …

Tajima-Peña: … is the assailant in this scene. Yeah.

Abdullah: And, you know, as we talk about what’s happening now, we absolutely have to talk about hate crimes perpetrated on Asian Americans. I love that you’re amplifying this research that shows that the primary perpetrators are white men, as they are with all hate crimes.

But also, when we look at places like Los Angeles, the No. 1 victims of hate crimes continue to be African Americans. We saw an 87% increase in hate crimes against Black people in Los Angeles in the last year.

So I think it’s important to have these kinds of community conversations that aren’t mediated by those who benefit from the tensions. A lot of these narratives are being intentionally and deliberately crafted in order to fuel a system that doesn’t benefit either of us. And when I think about the current narrative around crimes against Asians and Asian Americans, they’re being used to really fuel over-policing and often in Black neighborhoods. I’m really grateful to Asian comrades who’ve said, you know, we do have to get to how crimes are perpetrated. And the answer is community, not police.

On how ethnic studies saved them

Tajima-Peña: I grew up in Altadena and went to John Muir High School in Pasadena. This was the 1970s, so there was no ethnic studies, of course, so we used to get the syllabus from SF State and UCLA and mimeograph it. And after school, we would do courses with each other.

But, you know, when you talk about saving your life — I’m Japanese American, and my family was incarcerated during World War II. And when I was in sixth grade, 10 years old, I was giving a report based on an interview with my mother and my grandmother, and my teacher screamed from the back of the classroom, “You’re lying. That can never happen in America.”

Have you seen the “Angry Little Girls” comics by Lela Lee? I was like that, just flipping the bird. I read “The Autobiography of Malcolm X” when I was 10. I was so pissed off, you know? “You’re telling me my mother is lying?”

She said, “Oh, yeah, they fabricated the whole thing.” And I said, “No, I know this is my truth because my family always talked about the camps.”

So I think that’s when I decided, you know, this history is dangerous. So if it’s dangerous, I want to be there.

Abdullah: Well, we’re kindred spirits. Because wherever there’s a fight, that’s where I want to be.

Tajima-Peña: My husband, who’s Mexican American and grew up on the border in Texas, says he was one of the original boycotters in 1968-69 when he was only like 11 or something, very young. He said ethnic studies also saved his life. Just that knowledge — because you know that it’s not that there’s something wrong with you, but that structurally, there’s something off.

On where society is now

Abdullah: Especially younger Asian folks, right? To be willing to say, you know, if we’re talking about liberation, we have to begin with Black liberation. And so we see early on in the Black Lives Matter movement, Asians4BlackLives forms in the Bay Area. We have Third World Power here in Los Angeles.

Tajima-Peña: For Asian Americans, I think a lot of things have been happening. It’s not only the surge of anti-immigrant hate, but also people getting involved with the Black Lives Matter protests as allies. Also, people are looking at our own history. And once you understand that ecosystem of systemic racism, it changes your perspective.

Abdullah: I think that we have to be willing to transform systems, and I think we have to resist the lure of being favorited by an existing system. I think that white supremacy does try to say to Asian Americans, you’re the good ones, right? We’ll protect you. But Asian and Asian American folks are witnessing what’s happening. And standing in solidarity means saying, “No, you know, that’s not what we want. What we want is this world where everybody can be free, beginning with Black people.” And I think that’s the moment that we’re in.

And then I think for Black people, we have to be willing to forge relationships again that are not mediated by white supremacy and see Asian and Asian American folks as potential comrades in the struggle, rather than being on the side of systems that have always kept us oppressed.

Tajima-Peña: Asian Americans have been much more honest about the history of that racial hierarchy. Understanding where we’ve had privilege and also understanding that we still bear the marker of race. It’s alluring to be able to take advantage of the model minority. You get treated better. People think you’re smart or whatever. Maybe it’s easier to get a job. … But there are plenty of Asian American communities who are really subject to over-policing and deportations. For particularly young Asian Americans, when they think about their community, they’re not just thinking about Asian Americans.

Abdullah: I always say the murder of George Floyd cracked the world wide open … but we have to remember that that portal won’t always be open. We have to operate in a way that the solidarity is one that is more permanent — that it’s not just a moment of solidarity, but it’s a practice and ongoing practice of solidarity.