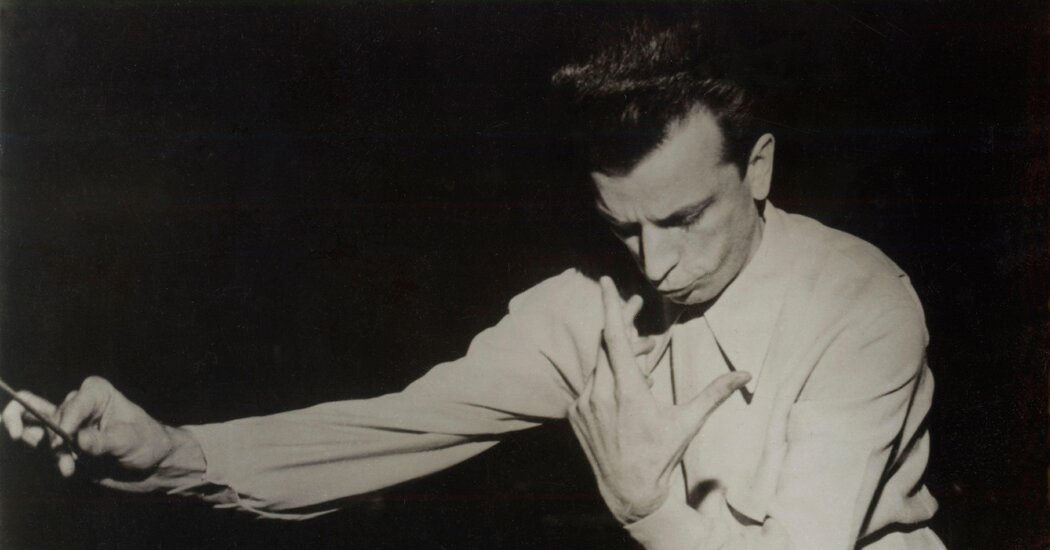 Frost glazed the ground, and mist hung in the air, as a brand-new Douglas DC-6B took off from Orly Airport near Paris early on Nov. 24, 1956. The plane was headed for Shannon, Ireland, and then New York.

It would arrive at neither.

About 15 seconds after it left the ground, the plane dipped slightly below its path, clipped an unlit house, and plunged into the village of Paray-Vieille-Poste. The authorities never found the cause of the crash; all but one of the 35 people aboard died.

Among them was Guido Cantelli, 36, a “comet of a conductor,” as one critic called him, and the protégé of Arturo Toscanini. In just eight years, Cantelli had shot from obscurity to a career whose brightness still blinds today. Frequently a guest of the New York Philharmonic, which he was on his way to conduct, he had been announced as the music director of the Teatro alla Scala in Milan a week before the crash.

Perhaps it is the manner of Cantelli’s death, the waste of it, that explains some of the fervency of interest that has come to surround him. It is hard to think of many conductors whose careers can be examined in similarly pinpoint — if admittedly macabre — detail, to get closer to what could have been.

After all, not only are all of Cantelli’s studio recordings for EMI, chiefly with the Philharmonia Orchestra of London, to be found in a 10-disc Warner box, but his meteoric progress can also be tracked from week to week, as an extraordinary proportion of his radio broadcasts with the Philharmonic, the NBC Symphony and other groups have been restored and released on labels including Testament, Music & Arts and Pristine. We now have as complete a portrait of Cantelli as we probably ever will.

And what a portrait. Forget the what-ifs that smoked from those Parisian flames. Forget the mystery of how the history of music in the United States might have been rewritten if Cantelli, and not Leonard Bernstein, had succeeded Dimitri Mitropoulos at the Philharmonic, as Mitropoulos had apparently wished. Forget, too, the lament that Cantelli barely had time to mature, as if the efforts of a younger musician are necessarily of inferior worth.

Emerging as if fully formed in the works of Schumann and Brahms, Tchaikovsky and Debussy, Cantelli was arguably the greatest conductor who never quite was — as the New York Times critic Olin Downes wrote in 1953, one who “understands the notes and wraps his heart around every one of them.”

Earnest, tense and introverted, Cantelli was not the copycat he often stood accused of being, as if the mark of Toscanini was disqualifying in a century in which his mentor’s influence was vast. Even if he wielded a tension of rhythm, a ferocity of line and a strictness of discipline that were familiar, those traits were tempered with an elegance of expression, a taste in color and a mania for details that he tortured himself and his musicians to perfect. He treated all music as song, and he sang it with the care he thought it deserved.

Singing itself played only a minor role in Cantelli’s training. Born in Novara, Italy, on April 27, 1920, he was the second son of a military bandmaster who stood him on a table to conduct a band when he was 5.

Cantelli learned the piano as well as the trumpet, horn and several percussion instruments as a boy, and he was quickly taken to study with the organist of the Basilica di San Gaudenzio. He sang in the choir and first directed it at age 8; wrote a Mass at 10; and started substituting at the organ when he was 14, even playing themes from “Tristan und Isolde” during services.

He could often be seen in the gallery of the Teatro Coccia, reading scores by torchlight; other evenings were spent tuning a radio he had saved for with his allowance, or with his records, those of Toscanini foremost among them. He entered the Milan Conservatory in 1939 and completed a seven-year composition course in three, but he was no composer. Shortly after graduating, in 1943, he made his debut leading “La Traviata” at the Coccia, a theater Toscanini had opened in 1888.

After German troops occupied Novara that September, Cantelli was sent to a concentration camp on the Baltic coast, and was worked so close to death that he ended up weighing just 80 pounds. The way the story was later told, to promote him as an antifascist just as courageous as Toscanini had supposedly been, he refused to collaborate with the Nazis and eventually became a hero of the Partisans, one supposedly hours from being shot when the Allies liberated Milan.

Not quite, according to Cantelli’s biographer, Laurence Lewis, who describes him as basically apolitical. The Germans probably deported him, a weak conscript, to a labor camp because he declined to fight, if he was ever given the choice, and after a few months they drafted him to serve the rump Italian Social Republic of Mussolini. En route back, he escaped from a hospital and returned to Novara, where he forged documents for the Partisans while working at a bank. He married his sweetheart, Iris, the day Mussolini was shot.

After the war, Cantelli found food scarce and opportunities scarcer. He debuted with La Scala’s orchestra outdoors in July 1945, but didn’t return until May 21, 1948. Coincidentally, Toscanini was in the theater that night, and was confronted with a vision of his youth. Within days, the world’s most famous conductor was in the Cantellis’ tiny Milan apartment, playing his latest record and inviting Cantelli to spend a few weeks conducting the NBC Symphony.

Cantelli, then 28, arrived in New York at the end of December, and he was swept into a world filled with musical eminences and fawning socialites. Toscanini declared him an honorary son. Four concerts followed in January and February, each of them broadcast, each a sensation. There was a remarkably passionate account of Hindemith’s “Mathis der Maler” Symphony alongside elegant Haydn one week; a stingingly potent Tchaikovsky “Romeo and Juliet” with Casella the next; and a heated Bartok Concerto for Orchestra another.

“We sense in Mr. Cantelli a musician with a destiny before him,” Downes wrote after the last program, of music by Ravel and Franck. Toscanini took Cantelli to see the Rockettes to celebrate before his voyage home; he would return each winter, adding long stints with the Philharmonic and the Boston Symphony that outlasted his appearances with the NBC, which folded in 1954.

Throughout Cantelli’s career in the United States, there were criticisms of his repertoire, which ran from Frescobaldi and Monteverdi to Barber and Dallapiccola but turned out to be repetitive from season to season. There were also more fundamental complaints that he was too much the precisionist. “Other men mature from uncontrolled passion to control,” Downes wrote after his debut with the Philharmonic, in January 1952. “Mr. Cantelli’s way may be to graduate from control to release.”

That control was hard-earned. Cantelli didn’t read around a composer’s life, or consciously filter music through his own aesthetics; he just read scores, and without the memory of a Toscanini or a Mitropoulos he learned them, painstakingly, through their melodies. It was not unusual, he said in 1955, for him to pace a room singing an obscure bassoon line during the six hours a day he studied.

He fixated on how to release notes as well as attack them, on how to give a line an end as well as a beginning, on how to attain a balance that let parts sing through. But if his fastidious lyricism endowed his Mozart and his Rossini with grace as well as drive, his ability to twist a score taut also gave his Mendelssohn, and even his Debussy, immense cumulative force.

Cantelli’s perfectionism found its ultimate expression in his fanatical sessions in London with the Philharmonia. Ravel’s “Pavane pour une enfant défunte,” to take one example, took him 20 tense takes to get its six minutes of music right, during which he stormed offstage, the harpist Renata Scheffel-Stein cried and the horn player Dennis Brain feared his lip would crack.

In some accounts, though, he prefers suavity over the sweat-drenching volatility he could incite live. His Brahms First captivates in the studio, but it blazes with the Boston Symphony, from 1954, on Pristine. His Philharmonia Beethoven Seventh dances happily, but the same symphony stuns on a Music & Arts release from a 1953 performance that, an astonished Downes wrote, seemed to invoke the composer’s “spirit brooding gigantic over the universe.”

It’s plenty enough to raise the question of why Cantelli did not take a major post until his crisply rendered “Così Fan Tutte” at La Scala in 1956 forced that house to make him an offer he could not refuse. Appearing as a guest with a handful of prestigious, quite different ensembles offered him “more in the way of interest, execution, and variety of expression than he could obtain from any single orchestra,” one profile paraphrased him as saying.

The Philharmonic counterfactual is too far from the truth even to ask. At the time of his death, Cantelli had planned to devote most his time to La Scala, his cherished Philharmonia aside; his bond with the New York players had already broken.

His sole recording with the Philharmonic, a Vivaldi “Four Seasons,” is his worst studio effort, and the exertion he had to put into overcoming the orchestra’s intransigence once led him to collapse in the Carnegie Hall wings. Despite outstanding performances — vigorous yet finessed — in the spring of 1956, Cantelli had been so furious at the players’ antics then that he begged the Philharmonic’s management to relieve him of his contractual obligations that November. They refused.

And then he was gone.

In New York, where the ailing Toscanini was not told of his heir’s death, Mitropoulos led Strauss’s “Tod und Verklärung” in his memory with the Philharmonic, a performance that — unlike Cantelli’s own rapturous accounts — seems to dissolve in grief.

In Milan, La Scala’s orchestra played Handel’s “Largo,” the last piece he had led, from the pit as his hearse paused outside the theater. Its former music director, Victor de Sabata, offered to conduct; the players preferred that Cantelli do so himself, one last time.

Anne Heche’s best friend and son visit her at hospital, provide insight into day of crash