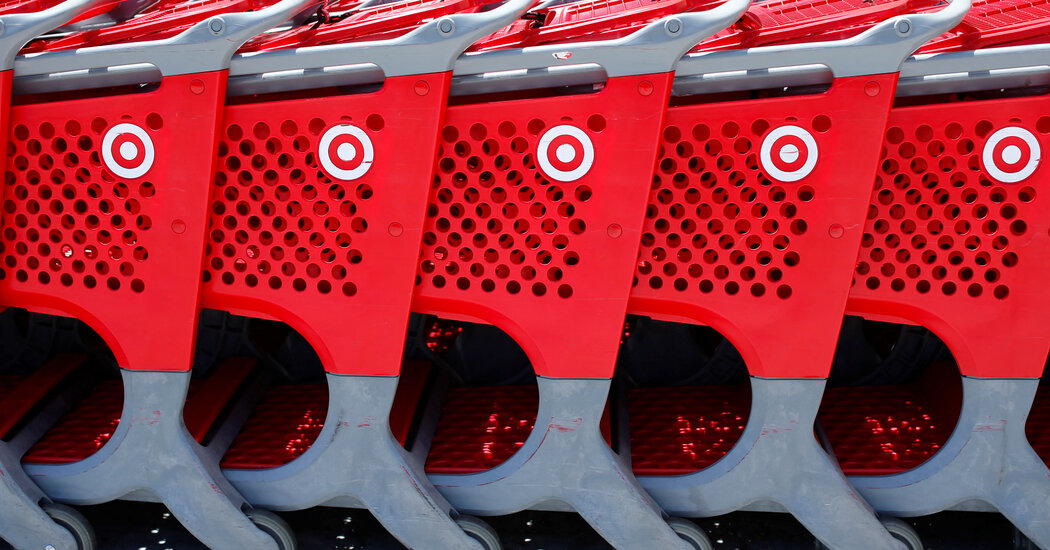 Target posted quarterly earnings on Wednesday that were much weaker than Wall Street expected, as the retailer got rid of excess inventory that built up as shoppers shifted their buying habits. Company executives presented the actions as tough but necessary to position the retailer for a stronger performance in the rest of the year.

Target’s net profit plunged to $183 million in the three months through July 30, down 90 percent from the year before. That was far below what Wall Street analysts expected, even after the company had warned in recent months that unwanted inventory would dent its earnings.

Target’s comparable sales grew 2.6 percent in its latest quarter, versus the same period last year. That was slightly below analysts’ expectation of a 2.8 percent increase.

The lower profit came from Target’s glut of inventory. It had $15.3 billion in inventory, a 36 percent increase from a year earlier. As shoppers have curtailed their spending on items deemed discretionary, squeezed by higher-than-usual prices in essential categories like grocery and gas, Target was left with electronics and apparel that people were not buying.

Target said it was solving the problem by using discounts and canceling orders for the fall with vendors, which would result in lower profit. The retailer is still dealing with excess inventory in the current quarter, it said Wednesday, and also faces the industrywide problem of higher freight and transportation costs.

The company’s operating profit margin was 1.2 percent in its latest quarter, below its forecast for about 2 percent, which it had lowered in June. That’s also a significant drop from a 9.8 percent margin in the same quarter last year. It maintained its forecast for its full-year revenue growth to be in the low- to mid-single-digit range, and for its second-half operating margin to be near 6 percent, suggesting that conditions would improve in the months to come.

Target’s executives spent nearly an hour at the start of a call with analysts on Wednesday explaining their actions as necessary to ease the burden on its workers and distribution centers. Without them, shoppers would walk into cluttered stores and associates would have to work around the buildup, Brian Cornell, Target’s chief executive, said. The hit to profit that the retailer took to get rid of the merchandise would lead to longer-term growth, he said.

“Consider the alternative,” Mr. Cornell said. “We could have held onto excess inventory and attempted to deal with it slowly over multiple quarters or even years. While that might have reduced the near-term financial impact, it would have held back our business over time.”

Executives repeatedly pointed analysts’ attention to measures that the retailer said showed strength in its latest quarter, including rising foot traffic and gains in market share.

In the second quarter, Target’s transactions rose, but the average amount spent was flat. Its shares fell 2.6 percent in trading on Wednesday, to $175.49, erasing nearly all the previous day’s gains.

Lowe’s, the home-improvement retailer, and TJX, the owner of the discount retail chains T.J. Maxx and Marshalls, also reported earnings on Wednesday.

Lowe’s showed comparable sales declining slightly but operating income increasing slightly. The company said that sales growth came from professional shoppers like contractors, a group that makes up a smaller share of its typical consumers compared with Home Depot.

TJX reported a 5 percent fall in comparable sales in the latest quarter. Still, Ernie Herrman, TJX’s chief executive, said in a statement that he sees a “marketplace flush with off-price buying opportunities.” Retailers like T.J. Maxx often buy the excess merchandise from other store chains.