One of California’s wealthiest counties could run out of water 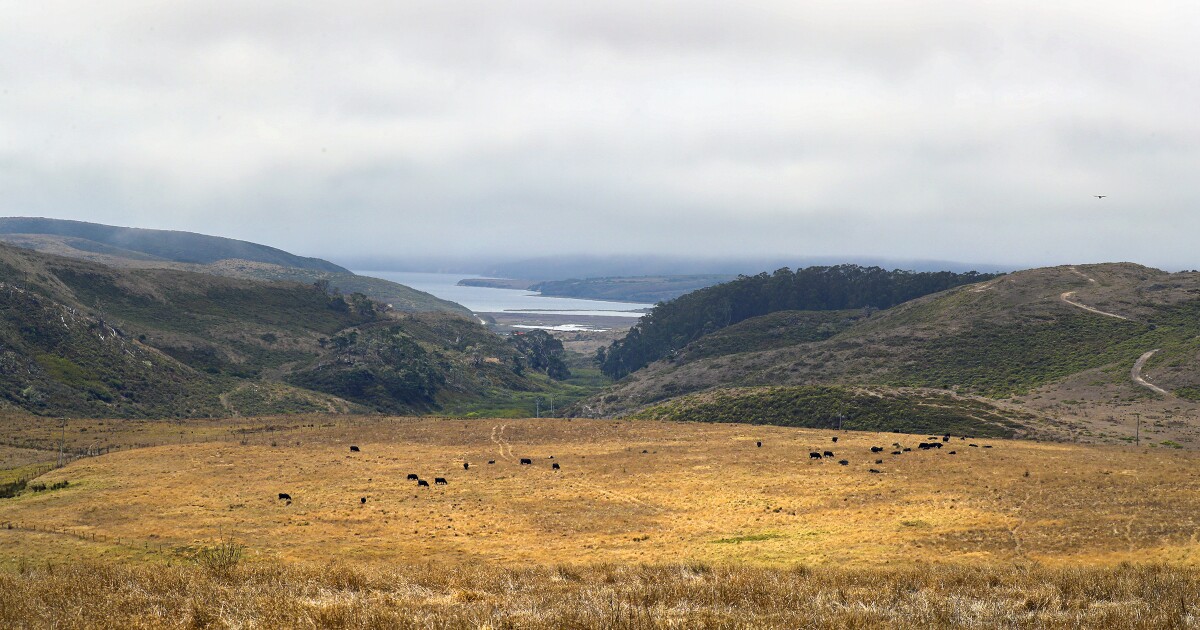 In Marin County, a $2-million house with an ocean view doesn’t necessarily come with a reliable water supply.

Water managers are taking extraordinary measures to keep faucets flowing should the state enter a third year of a punishing drought this winter. That this affluent redwood-studded ecotopia faces such a possibility, though, is a harbinger of a climate-constrained destiny that is fast arriving.

“These droughts are now on a new timeline,” said Newsha Ajami, a hydrologist and director of urban water policy at Stanford University’s Water in the West program. “There used to be at least 10 years in between droughts in California, which was time enough for water ecosystems to recover.”

No longer. The last California drought, which persisted six years, ended in 2017. The current one began three years later and poses an existential threat to places such as Marin County that rely on local water sources for most or all of their supply. The last year has been the second driest on record in California.

That’s forcing a reckoning with a century of water management that has largely focused on expanding supply rather than on conservation and managing demand.

“We need a new relationship with water, and must realize that we are in this moment of climate change, and we cannot continue to use water, particularly outside, in the way that we have in the past,” said Cynthia Koehler, president of the board of directors at the Marin Municipal Water District, which serves two-thirds of the San Francisco Bay Area county’s 252,000 residents.

It’s a cloudless September morning and as temperatures climb toward 75 degrees, the bone-dry bed of Alpine Lake stretches toward the horizon.

Surrounded by redwood- and Douglas fir-covered hills, the century-old reservoir is one of seven that supply 75% of the district’s water. They are down to less than a third of capacity, and if sufficient rains don’t arrive this winter, the district projects they could be empty by July.

Marin Water obtains the other quarter of its water from the Russian River in neighboring Sonoma County. That allocation, however, has so far been cut 20% and further reductions are likely if the drought intensifies.

The crisis has compelled the district to embark on a crash project to spend up to $90 million to build a pipeline across San Francisco Bay to import enough water to meet indoor consumption. Although Marin Water hasn’t made a final decision on the pipeline, on Tuesday the board approved $23.2 million for the project and it is negotiating to buy water from agricultural irrigation districts in the Sacramento Valley.

Also on the table is spending at least $35 million to rent or buy portable desalination plants from Australian company Osmoflo Holdings that would supply about half of indoor demand. The plants would be set up on the shoreline to draw water from San Francisco Bay.

The board has called on residents to voluntarily slash water use by 40% and has restricted outdoor irrigation. The district has yet to hit that target — it achieved a 24% savings the second week of October — and will impose modest fines on customers who exceed certain thresholds of use.

The district is also pursuing longer-term solutions, such as a possible groundwater storage program with Sonoma County to capture runoff from California’s increasingly intense, if infrequent, deluges.

Ajami said water utilities’ traditional centralized infrastructure is ill-suited to the climate challenge. Rather, they need to treat individual homes as sources of supply, by promoting systems to recycle and reuse water, such as capturing runoff from showers to flush toilets. That alone would cut household use 30%, she said.

“We live in the 21st century, but we use the same plumbing in our homes as 50 years ago,” Ajami said.

If Marin County is isolated from California’s vast water infrastructure, then the Marin beach town of Bolinas is an island all its own.

Wedged between coastal hills, a large wildlife-filled lagoon and the Pacific Ocean, the village of 1,200 is home to aging hippies, artists, surfers, organic farmers, a few tech billionaires and a three-time Oscar-winning actress, Frances McDormand. Their sole source of water is Arroyo Hondo Creek and two small reservoirs.

That’s sufficient when the town gets its average 32.5 inches of rain a year. But from July 2019 to June 2020, Bolinas received only 22.7 inches. Consumption soon began outstripping available creek water by 50%. That triggered withdrawals from the reservoirs to meet demand.

The situation was turning dire by February. In the wettest time of the year, only 10.2 inches of rain had fallen since the previous July. The Bolinas Community Public Utility District warned that reservoirs would be empty by the end of the year if typical demand continued.

It hasn’t — and therein lie lessons on how to adapt to an increasingly dry climate and live within some unforgiving limits.

At the turnoff to Bolinas, the utility district has lined the road with signs declaring, “Water Supply Shortage. Reduce Usage Now!” Public restrooms near the beach have been closed, and surfers rotate out of waterless portable toilets set up by the county.

Under voluntary conservation measures, the community must keep consumption below 66,000 gallons a day averaged over seven consecutive days to avoid triggering mandatory rationing. (Residents who violate rationing three times will have their water cut off.)

At the entrance to town stands a billboard in a eucalyptus grove, which marks Bolinas’ average daily consumption over the previous week. On a mid-September day the seven-day running average consumption was 52,542 gallons and trending downward.

“At this time last year, the community was using almost twice as much water, and so we would really be depleting our reservoir storage now if that had continued,” said Jennifer Blackman, general manager of the Bolinas utility district.

To a large degree, Bolinas has been shaped by constraints on water. Fifty years ago, the utility district declared an emergency and imposed a moratorium on new hookups, freezing development and lending the town a 1970s vibe of living within ecological limits.

A visit to resident Jeff Clapp’s home shows how the town has staved off disaster. Blue barrels that line one side of the house store rainwater from a catchment system, while another tank holds used household “graywater.”

“We haven’t washed the car, and we stopped gardening,” said Clapp, nodding at a dusty silver Tesla. “We don’t use any water outside other than the graywater for the fruit trees.”

Clapp glanced at his phone and told me his family used 57 gallons the previous day, or just about 14 gallons per person. (The California average is 102 gallons a person.) He can track consumption in real time thanks to a $150 device called a Flume that he attached to the water meter that sits next to a rack of surfboards. The rectangular gray box measures the flow into his home and beams data to the cloud where the information can be accessed on a smartphone app.

“The kids get excited about who can take the shortest showers, and there is a bit of competition that you have about how much water you used this week versus the prior week,” he said.

Clapp said Flume has twice alerted him to leaks that he was able to immediately fix. The Marin water district estimates that it loses 10% of its supply through leaks, which could make real-time detection a significant source of water. (Nationwide, nearly 1 trillion gallons is lost to leaks annually, according to the U.S. Environmental Protection Agency.)

The Bolinas utility district found that one customer wasted 47,000 gallons in December when a hose was left running while they were out of town. Another resident used 112,140 gallons when a toilet flap failed while they were on vacation. That’s nearly 2 1/2 years’ worth of water.

The Marin water district struck a deal with Flume to provide the devices to its customers at a 75% discount. Since June, 1,600 of the monitors have been distributed.

“Getting that kind of information into the hands of consumers is going to fundamentally change how we use water because people really don’t know how much they use until they get their bill,” said Koehler, the Marin Water board president.

In late September, Bolinas utility district chief operator Stewart Oakander drove into Point Reyes National Seashore, a park just north of the town, and turned off onto a narrow dirt road to show a reporter the source of the community’s water supply.

Following the track under a canopy of Douglas fir and oak trees, there’s little sign of the creek until the sudden appearance of a small dam holding back a pool of water. At this catchment and one farther upstream, water trickles into intake pipes and flows to a treatment plant several miles away.

Drought isn’t the only climate worry keeping water managers up at night. As temperatures rise and heat waves become more frequent, typically foggy summer days are fewer. (A 2010 study found a 33% decline in the occurrence of fog along the California coast since 1901.) Moisture-rich fog not only lowers evaporation rates in Arroyo Hondo, but contributes to the creek’s flow.

“There’s actual measurable precipitation from the fog — you can stand here and get soaked from the trees dripping on you,” Oakander said. “We’ve noticed there’s a noticeable lower flow in the creek when it’s hot out and the trees are pulling more water.”

Thanks to extraordinary conservation efforts, Bolinas’ two reservoirs are at 60% capacity. But the utility district has projected that they could be depleted by August if ample rainfall doesn’t return. “If it’s a third dry year, I think we’ll be feeling pretty nervous,” Blackman said.

Marin’s water crisis is now threatening the county’s organic farms and dairies. In Bolinas, an irrigation system sprays fields of lettuce, summer squash, cucumbers and other vegetables at Star Route Farms. California’s oldest certified organic farm, Star Route, draws from storage ponds that it replenishes each winter from a nearby creek where it and other farms hold water rights. The farms agreed not to withdraw water in the summer to help restore endangered Coho salmon.

“I’ve never seen the creek this low, and I’ve been here 30 years,” said Annabelle Lenderink, a manager at Star Route. “We’re worried that if we don’t have a good winter, we won’t be able to fill our ponds and farm the next season.”

At Straus Family Creamery’s dairy in the coastal town of Marshall, the farm’s reservoir is at about 15% of capacity, Chief Executive Albert Straus said.

The nation’s first certified organic creamery, Straus is tapping a well drilled during California’s 1976-77 drought. Other Marin dairies that supply the creamery have been forced to truck in water and sell cows. Feed costs have jumped more than 30%.

Straus said the dairy’s efforts to conserve and reuse water have helped it weather the drought, as has a “carbon farming” initiative that applies compost to pastures. That allows the soil to retain water so grass for the cows has continued to grow while neighboring dairies’ fields have withered.

“This drought is just so extreme,” Straus said. “Another dry year will be devastating.”