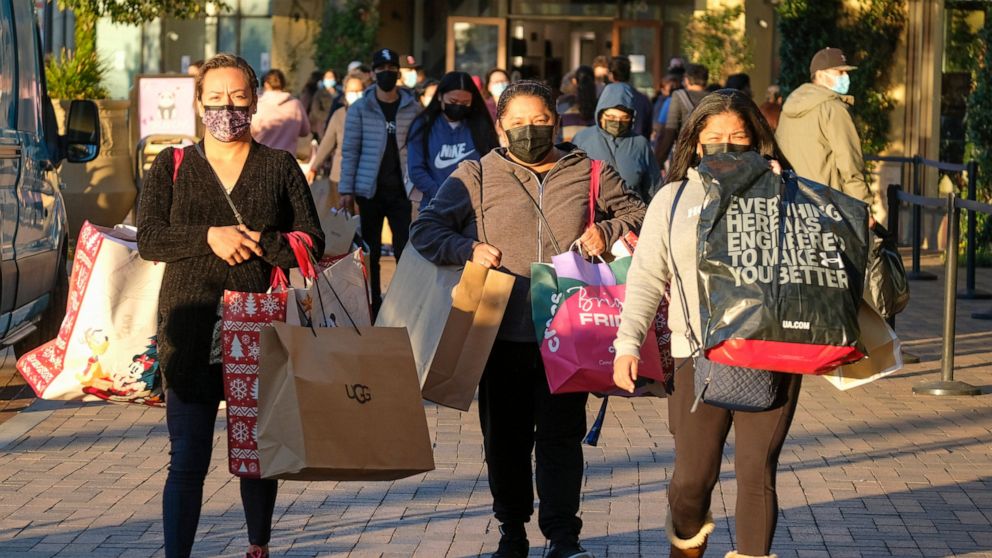 NEW YORK — The National Retail Federation, the nation’s largest retail trade group, expects holiday sales growth will slow to a range of 6% to 8%, compared with the blistering 13.5% growth of a year ago.

But inflation can pump up sales even if people are buying less, and with prices surging to uncomfortable levels, industry analysts believe that inflation-adjusted sales could be flat, or even negative this year.

Holiday sales have risen an average of 4.9% over the past 10 years but Americans ramped up spending during the pandemic, which accounted for some outsized sales numbers.

The NRF on Thursday predicted that sales in November and December will grow to between $942.6 billion to $960.4 billion. Holiday sales exploded during the pandemic with Americans splurging on pajamas and home goods, mostly online.

The group expects that online and other non-store sales, which are included in the total, will increase between 10% and 12% to between $262.8 billion and $267.6 billion.

The forecast is in line with a slew of holiday forecasts from various research and consulting firms point to a sales slowdown from last year. AlixPartners predicts holiday sales to be up anywhere from 4% to 7% from last year, which was up 16%, according to its calculations.

Consumer spending accounts for nearly 70% of U.S. economic activity, and Americans have remained resilient even with inflation near four-decade highs. Yet surging prices for everything from mortgages to rent have upped the anxiety level. Overall spending has slowed and shifted increasingly toward necessities like food, while spending on electronics, furniture, new clothes and other non-necessities has faded.

Shoppers are also getting an early start for the holiday shopping season, picking up gifts in October as retailers like Walmart and Target push holiday discounts earlier to help shoppers spread out their spending in difficult economic times.

Matthew Shay, CEO and president of NRF, noted that shoppers remain steadfast in their spending but, “in the face of these challenges, many households will supplement spending with savings and credit to provide a cushion and result in a positive holiday season.”

Inflation in the United States accelerated in September, with the cost of housing and other necessities eliminating much of the pay gains. Overall prices rose 8.2% in September compared with a year earlier, down slightly from August, according to the latest government report.

The Federal Reserve increased its benchmark interest rate Wednesday by three-quarters of a point for a fourth straight time in the latest bid to cool inflation, and consumers spending.

It was the central bank’s sixth rate hike this year — a streak that has made mortgages and other consumer and business loans increasingly expensive.

Shoppers are dipping into savings and going into debt. That could cause a holiday hangover