Jeff Bezos’ ship, named for his mom, will no longer be used to catch rockets 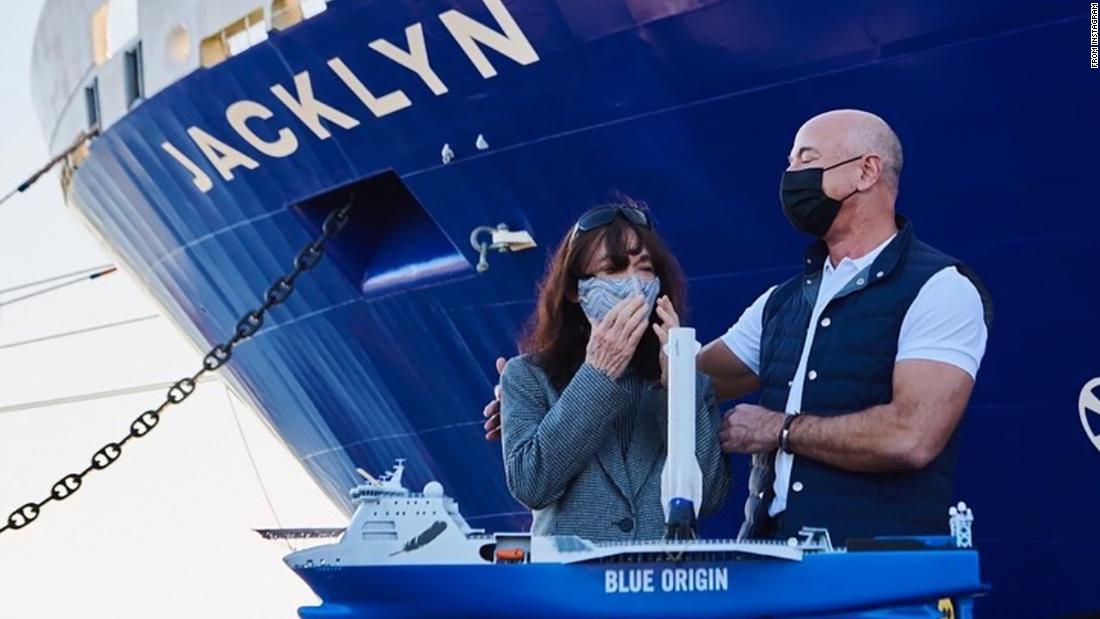 It is not clear what will happen to the Jacklyn, as the ship is called, which Bezos dedicated to his mother in a small ceremony in Pensacola, Florida in December 2020. Blue Origin could still use the ship for another purpose or abandon the project altogether. Mills said the company is “still assessing options.”

One alternative to the big ship is to opt for an autonomous, seafaring platform or barge, much like the droneships that SpaceX uses to catch its rockets after flight.

Blue Origin wanted to sail the Jacklyn out into the Atlantic Ocean to catch its New Glenn rocket boosters. When the large first-stage booster that gives the initial thrust at liftoff expends most of its fuel, it is designed to detach from the upper stage of the rocket and make a controlled pinpoint landing on Earth, just as SpaceX already does with its Falcon 9 rockets.

Blue Origin’s website still references landing its rockets on a ship, rather than a barge, touting that it allows the booster to land in turbulent ocean conditions. Theoretically, a massive ship could remain steady in rough waters, allowing Blue Origin to carry out its booster retrieval operations in all types of weather.

But that plan would have required the Jacklyn, a former cargo ship built in 2004, to undergo extensive retrofitting — including the installation of a massive platform for the rocket to target. Mills declined to say how much the refurbishments would have cost.

Landing rocket boosters instead of discarding them in the ocean, as other rocket companies have done for decades, is at the core of SpaceX’s and Blue Origin’s plans to bring down the cost of a launch and ensure profitability.

Blue Origin’s New Glenn rocket is planned to be the first of the company’s rockets that will be capable of reaching orbit, a trek that requires speeds topping 17,000 miles per hour. SpaceX has sent rockets into orbit since 2008.

So far, Blue Origin has only conducted flights of its much smaller New Shepard suborbital rocket. That rocket has been used to carry paying customers — and last summer, Bezos himself — on brief, supersonic joy rides that reach the edge of what is technically considered space.

New Glenn is not expected to carry humans, at least at first, but will instead haul satellites and other cargo to orbit.

Though already a couple of years behind its original schedule, Blue Origin is hoping to launch the first New Glenn to orbit by the end of 2022.

Despite the New Glenn never having flown, it has already landed several commercial satellite launch contracts, and NASA selected the rocket as one able to compete for missions that would launch planetary, Earth observation, exploration and scientific satellites.