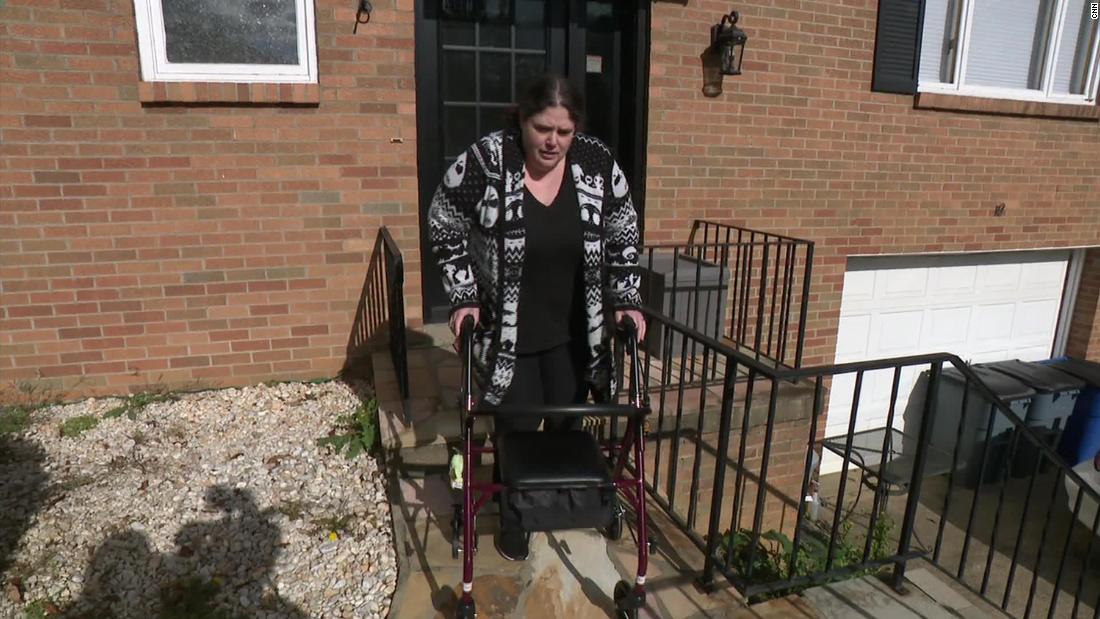 “I pretty much live here in the living room,” Bedell said from her house near Pittsburgh. “I feel like I’ve lost the life that I had.”

Last November, she and her family contracted Covid-19. The virus killed her father.
Nearly a year later, she’s still battling post-Covid syndrome, a mysterious long-term condition plaguing some coronavirus patients, and she remains so ill she’s unable to work.
Bedell, who’s 42, keeps a long list of her symptoms, including severe fatigue, cognitive impairment — known as “brain fog” — and constant pain. She’s put on 60 pounds, and often sleeps on the couch because she can’t find the strength to climb the stairs to her bedroom.

She needs a walker to get around the house and a wheelchair for medical appointments.

“I literally can’t even leave my house by myself,” she said.

Before Covid, Laurie was the nursing director for a home health agency, but she hasn’t worked since January. After using up her paid time off, she was laid off. She says there’s no way she could work in her current state.

“I barely function some days,” she said. “I can hardly get out of my bed or up off of the couch. The pain and the fatigue is just so severe that I literally can’t move.”

Bedell’s case is severe but not unique.

Dr. Greg Vanichkachorn and his team at the Mayo Clinic in Rochester, Minnesota, are treating and studying post-Covid syndrome.

“Work issues have been one of the most significant problems we’ve encountered in our patient population,” Vanichkachorn said. “Up to about 40% of our patients are not back to work several months after their infection.”

Looking at data from their clinic and several other studies, they’ve noticed a troubling trend.

“We estimate that approximately 1.3 million individuals are out of work right now due to ‘long haul’ Covid symptoms,” he said.

Though it’s just an estimate, Vanichkachorn says that could mean more than a million Americans are out of the labor force as the country deals with a worker shortage and more than 10 million open jobs as of August.

“A lot of those jobs aren’t being filled because people are struggling with Covid,” Zandi told CNN. “Long Covid is increasingly a significant headwind to the labor market, for businesses to get operations up and running, and, ultimately, for the broader economy to kick into high gear.”

Studies on Post-Covid syndrome are still in their infancy, but early estimates indicate that 10% or more of Covid patients might experience long haul symptoms. A study published in June by the non-profit FAIR Health found that 23% of Covid patients had sought treatment for post-Covid symptoms a month or more after their diagnoses.
The US Centers for Disease Control and Prevention estimates that more than 46 million Americans have contracted Covid-19.
A recent US Census Bureau survey estimated that 3.7 million Americans are out of work because they’re either caring for someone or sick themselves with coronavirus symptoms. The survey also found roughly 2.5 million people aren’t working because they’re concerned about getting or spreading Covid.

“I’m not surprised if 1.3 million or more people are out of the workforce because of long Covid,” he said. “Because if you really understand the symptoms, you know, it affects their daily life at work.”

Vanichkachorn says most of the patients they’re studying have well-paying jobs and good health insurance, and he’s concerned about demographics that are missing from their data.

“My fear is that there are individuals out there who are suffering severely from this condition but they simply can’t take time off of work to go get care,” he said. “They have to go to work to keep the lights on, keep food on the table.”

“I’ve had a headache every day for a year,” she said.

But after a month off, she returned to her classroom, needing the income and health insurance.

“It was nearly impossible for me to think about leaving,” she said. “I don’t know how I do it. I just make it through the day.”

The US government recognizes long Covid as a disability, and patients can apply for financial assistance. But that can take months, and many long haulers say they’ve been denied.

Bedell applied for disability in September and is still awaiting an answer.

She and her husband have used up their savings and retirement funds to pay the bills.

“It’s been a catastrophe for us,” she said. “That’s my biggest concern, honestly. I’m terrified that I’m never going to be able to go back to work.”