Column: That Wells Fargo accounts scandal was even worse than you can imagine 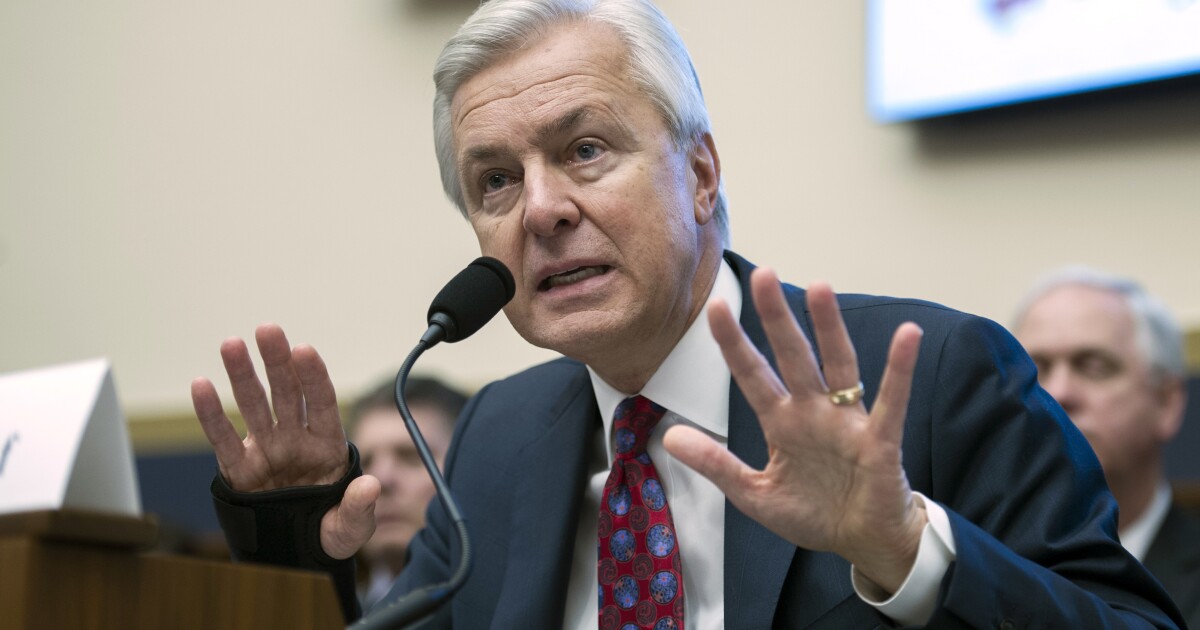 One useful rule of thumb when it comes to business scandals is that they often seem to get worse after the initial disclosures, even after a string of “official” investigations. The unauthorized-accounts scandal at Wells Fargo is an exemplary case, and we don’t mean that as a compliment.

The latest revelations about the Wells Fargo scandals have come to us from the Office of the Comptroller of the Currency, a key federal banking regulator.

Late last week the OCC carpet-bombed a clutch of former executives at the bank, levying new charges about their alleged malfeasance and nonfeasance in connection with the unauthorized-accounts scandal and demanding millions of dollars in fines and other disciplinary actions.

Former Wells Chairman and Chief Executive John F. Stumpf settled the OCC charges by agreeing to a permanent ban from the banking industry and a $17.5-million fine. That’s on top of $41 million in equity awards he forfeited when he stepped down from Well Fargo in 2016, and another $28 million in compensation the bank clawed back from him in the wake of the scandal.

Two other former executives also settled with the OCC for a combined $3.5 million. Five other executives, however, are challenging OCC penalties in public hearings before an administrative law judge. Chief among them is Carrie Tolstedt, who as head of the Wells Fargo community bank division allegedly oversaw the conditions that led to the scandal. The OCC is seeking $25 million from Tolstedt and a total of $10.5 million from the four others.

A lawyer for Tolstedt said she would be vindicated and that she had acted with “utmost integrity and concern for doing the right thing.” Lawyers for most of the others similarly declared their clients’ innocence.

The OCC backed up its charges with a 100-page notice that adds new details to the conditions that led to the scandal and the failure of top executives and the Wells Fargo board to take action, even when articles in The Times first exposed the unauthorized-accounts practices in 2013. The OCC document effectively lays out a road map for how to foment extensive wrongdoing by rank-and-file employees and how to willfully avoid stamping it out once it occurs.

The document is replete with testimony and documentary evidence of how rank-and-file workers were harassed, intimidated and humiliated into breaking the law by opening unauthorized accounts to meet sales goals that their own superiors acknowledged were “unattainable.” The picture the employees painted was of bank sales offices that resembled sweatshops of the 1930s or retail warehouses of the present day.

“I was in the 1991 Gulf War,” one employee wrote to Stumpf’s office in 2013, according to the document. “I had less stress in the 1991 Gulf War than working for Wells Fargo.” Others said they were warned that “if they did not achieve sales goals, they would be ‘transferred to a store where someone had been shot and killed’ or ‘forced to walk out in the hot sun around the block.’”

“The noose around our necks ha[s] tightened,” another worker complained to Tolstedt and Stumpf. “This type of practice guarntees high turnover … [and] bankers who are really financial molesters [and] cheaters.”

The document also points to the consequences of doing so; Wells Fargo, the OCC observes, has struggled to regain its reputation for integrity while also paying hundreds of millions of dollars in legal settlements and administrative costs and also facing potentially billions more.

The bank’s current CEO, Charles Scharf, the former CEO of Visa and BNY Mellon, told employees last week that the conditions outlined by the OCC were “inexcusable. Our customers and you all deserved more from the leadership of this company.”

To recap, sales employees at Wells Fargo’s community bank — that is, the retail arm responsible for consumer savings and checking accounts and credit and debit cards — were discovered to have opened millions of unauthorized accounts and issued millions of unauthorized cards to meet punishing sales goals, on pain of termination. The practice went on for about 14 years, beginning as early as 2002.

For much of that period, top executives, including Stumpf, were well aware of the problem. But because Wells Fargo’s reputation among investors was based in part on its purported success at “cross-selling” — that is, getting customers to open multiple accounts and sign up for multiple services — they turned a blind eye to the mushrooming issues. In fact, the sales force was ripping off customers, sometimes saddling them with unwarranted fees and even damaging their credit reports.

The outlines and many details of this affair have been reported before, starting with The Times articles in 2013. But the OCC report provides shocking new details about the pressures that workers were subjected to and the extent of willful blindness at the top.

Customer complaints about unauthorized accounts flowed into the bank’s complaint lines. Some reached Stumpf and his underlings directly. In 2014, the OCC says, an acquaintance of Stumpf’s complained to bank officials “about some debit cards he received in the mail without consent.”

In 2012, a former Wells Fargo executive complained directly to Tolstedt that his wife had received two debit cards she hadn’t requested. The OCC says Tolstedt asked the executive “to stop telling the story because she thought it reflected poorly on the Community Bank.”

Starting in 2012, the OCC says, the bank began monitoring the sales force for misconduct. But it designed the monitoring to minimize its findings and looked only for certain misdeeds, avoiding numerous other red flags of unauthorized account-opening.

“Employees were referred for investigation only if they engaged in sales practices misconduct so frequently” that they ranked as the “top 0.01% or 0.05% of total offenders.” That meant that although 30,000 employees per month exhibited suspect activity, only as few as three per month were investigated.

At one point, security officials opened a few undercover accounts not tied to real customers to ferret out misconduct. Within 24 hours of the accounts being opened, two sales employees ordered debit cards for the customers, claiming they had spoken to the customers directly.

“Geeeez,” one of the security officials later said. “All I could do is shake my head.”

The activities of sales employees were not hard to understand, given the pressures they were under. As punitive as the sales goals were, some workers were threatened with discipline for not exceeding them. Turnover reached 35%, which should have caught management’s eye, if only because turnover of that magnitude imposes heavy costs for recruitment and training.

Tolstedt and Stumpf deflected questions about the scandal by continuing to ascribe it to a few “bad apples” on the sales force. But as the OCC observes, “employees were much more likely to be disciplined for failing to meet their sales goals … than for engaging in sales practices misconduct.”

The bank eventually said that it had fired 5,300 employees for sales misconduct, but more than 8,500 for performance issues, including failing to meet sales goals, from 2011 through late 2016. The firings for misconduct were just “the tip of the iceberg,” security officials told the OCC.

Tolstedt and other executives kept dismissing the seriousness of the misconduct, but it appears that at least one board member wasn’t fooled by a presentation by Tolstedt in October 2015. She showed “no recognition … of the extent or seriousness of the matter,” the director told the OCC. “So I had a very negative personal reaction. … I just said [Tolstedt’s presentation] was, well, excuse my language. I think I had called it a piece of [expletive].”

The OCC report identifies this director only as the former chair of the board’s risk committee, not by name. The risk committee chair at the time was Enrique Hernandez Jr., a Pasadena business executive who is no longer on the Wells Fargo board but serves as non-executive chairman of McDonald’s. Hernandez didn’t respond to messages left at his family business, Inter-Con Security.

The most pertinent issue raised by the OCC report may be the consequences of allowing working conditions this harsh to goad workers into misconduct while consistently failing to recognize and root out the real cause — that is, the environment created by management.

Wells Fargo not only caused serious harm to its own customers, but serious financial harm to itself, the OCC observes. So far, the company has paid $70 million to law firms to investigate the scandal, $185 million in settlements with government agencies, $97 million to consultants tasked with fixing the problem, and $142 million in settlements with customers. The company says it may face another $3.9 million in costs related to the scandal.

As of 2017, according to American Banker, the bank’s reputation was in “freefall.” In 2018, the bank spent hundreds of millions of dollars on a marketing campaign titled “Re-Established” to suggest that it had put its problems behind it. Around the same time, however, the company asserted in court that its statements that it was working to “restore trust” among its customers and “trying to be more transparent” about its scandals — statements made by its then-CEO Tim Sloan — were just “puffery.”

Investors have shown little faith in Wells Fargo’s efforts to rebuild its reputation. As the OCC observes, the bank’s competitors have experienced healthy growth in their stock prices since the first Wells Fargo settlement in September 2016, while Wells Fargo shares have barely budged.

So far, the sales scandal and others that have emerged have cost Wells Fargo two CEOs — Stumpf and Sloan, who stepped down last March. The bank has partially remade its board, but six directors who were serving during the scandal and in its aftermath, two as far back as 2009, are still in place. Why is that?