Column: Stop worrying about the cost of the Biden plan. In budgetary terms, it’s pennies 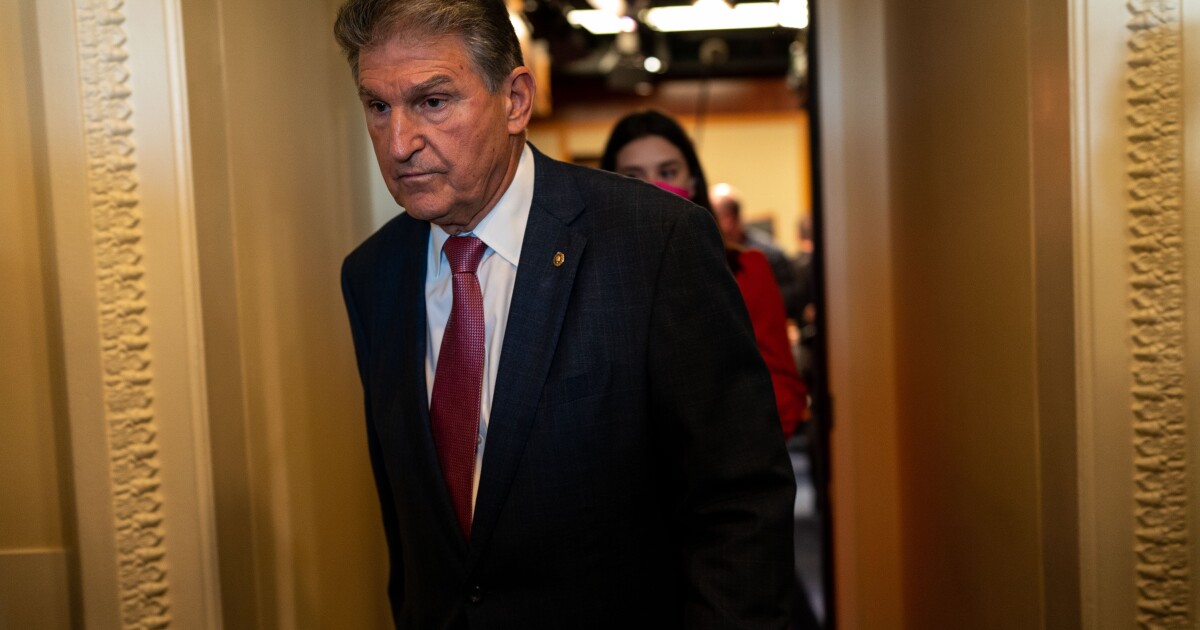 Let’s have some fun with numbers — specifically, the big numbers being thrown around in relation to President Biden’s spending plan, known as Build Back Better.

We’re joking, of course. Math isn’t fun at all for many people, no matter how it’s dressed up.

In this case, however, placing the big numbers in context will help foster understanding of what is at stake in enacting a program that will bring so much help to middle- and working-class Americans.

An overheating economy has imposed a costly ‘inflation tax’ on every middle- and working-class American.

This is the program commonly described as a “$1.7-trillion package.” It’s downsized from a “$3.5-trillion package,” the figure that had conservative Democratic Sen. Joe Manchin III of West Virginia absolutely shaking in his boots.

The bigger number provoked Manchin to promise, in the pages of the Wall Street Journal, that he would personally kill any spending plan that large.

Manchin on Monday said he’s still unsure that he’ll support the pared-back package, which merely demonstrates that he may still be arithmetic-challenged — unless, as my colleague Jackie Calmes wonders, he’s merely fronting for opponents of social spending in general.

In the context of federal spending, however, the size of the Build Back Better package comes to relative pennies. As I’ve reported before, in any context its benefits far outweigh its costs.

That was even truer of the original plan. But politics is about compromise, especially with Democrats holding razor-thin control of the Senate, so we can mourn the provisions that have been dropped to cut costs and still appreciate what’s still in (so far).

Let’s start our inquiry by explaining what’s meant by $1.7 trillion in federal spending. That’s over 10 years, so on average it comes to $170 billion a year. That’s the number that needs to be compared to other claims on the federal budget, which are typically given as annual figures.

The biggest single discretionary expenditure in the federal budget is on defense. In September, Congress easily passed a $768-billion defense budget, adding $25 billion to President Biden’s request even though the U.S. is actually winding down its defense presence overseas. That’s about 4½ times the average annual cost of Build Back Better; projected over 10 years, it would come to nearly $7.7 trillion.

Manchin voted for that spending, virtually without cavil. In fact, as Ryan Cooper observed in the Week, he’s voted for every defense bill for the last decade, $9.1 trillion over 10 years.

American defense policy has long held the trophy as the biggest source of waste on the federal books. America spent $168 billion on the Vietnam War, or $1 trillion in today’s dollars. (The sum includes military spending, aid to the South Vietnamese regime, and medical spending.) Our 10-year adventure in Afghanistan, a total of $2.3 trillion, according to the Cost of War Project at Brown University. Iraq, nearly $2 trillion.

All that spending effectively yielded nothing in terms of preparing America for the existing global challenge or anything in the future. Rather, it was a squandering of resources that could have been spent instead on domestic infrastructure, education, job training or support for America’s families. Critics of the Build Back Better program aren’t willing to take lessons from this inexcusable prodigality.

In his op-ed, Manchin wrung his hands over the notion that “an overheating economy has imposed a costly ‘inflation tax’ on every middle- and working-class American.” He fretted about the prospect that more federal spending would trigger more “rising inflation [and] crippling debt,” creating “a disastrous future for the next generation of Americans.”

Is that so? The average U.S. inflation rate over the last decade has been about 1.73%. If anything, that’s healthy — it’s well below the Federal Reserve’s target of 2% a year and high enough to avoid harmful deflation if the economy weakens. It’s also well below the annual average over the previous three decades, which was 3.5%.

In other words, Manchin’s inflation concerns are just specious. The economy hasn’t been overheating, and there has been no “inflation tax” in recent years.

Although it’s true that inflation has surged in recent months, economists are virtually unanimous in judging that the latest figures are an artifact of the reopening of the economy post-pandemic, with inadequate supplies of consumer goods meeting surging demand, and that the inflation rate will come smartly back down in coming months.

Manchin also warns that “at $28.7 trillion and growing, the nation’s debt has reached record levels.” At one level, that’s misleading — Manchin is adding together debt held by the public (about $19 trillion) and debt held by government accounts such as the Social Security trust funds, which shouldn’t be counted the same way since it’s covered by its own dedicated revenue sources.

Federal debt held by the public is approaching a near-term peak as measured against gross domestic product — more than 80%, by the estimate of the Office of Management and Budget — but it’s nowhere near a record. That was reached in 1944-1950 as a result of wartime spending, but came down very fast largely because economic growth reduced the ratio.

World War II was a crisis, but so too is the pandemic, and so too is the systematic withdrawal of government services from the middle and working class and the poor, which can only stifle future economic expansion.

How big a strain does the federal debt load place on Americans, anyway? Even though the amount of federal debt has been rising, federal debt service — the payment of principal and interest on existing debt — has been falling as a share of GDP.

It’s also proper to consider the Biden program in the context of the federal budget as it is today — about $6.6 trillion in fiscal year outlays. That’s about 31.6% of GDP. Add $170 billion to the sum, even without covering it with higher taxes, and the budget’s share of GDP rises to 32.4%. Is that really unsustainable? The question answers itself.

If Manchin or the other members of the spend-not caucus were really serious about stemming America’s debt spending, they’d be more outspoken about rolling back the Republican tax cuts of 2017, which are projected to cost $2.2 trillion over 10 years.

To his credit, Manchin voted against the tax cuts in 2017. But he has opposed the billionaires tax increase that’s part of the revenue package Biden has proposed to fully pay for his spending plan. Nor has he spoken out in favor of repealing all the cuts that were passed then, other than calling for a minimum tax on wealthy individuals and corporations.

As a result, all the tinkering done on the spending package has involved removing provisions that would help millions of Americans.

What’s lost in the debate over the gross numbers in the measure, treating them as though they represent only “spending” is a recognition of what they really are: not spending but investments — in child care, education, the environment, the rebuilding of America’s physical structure.

When the debate on Capitol Hill starts and ends with the size of the expenditure instead of where the money goes, Americans have every right to ask the opponents: Whose side are you on?