Britain Becomes First to Authorize an Antiviral Pill for Covid-19 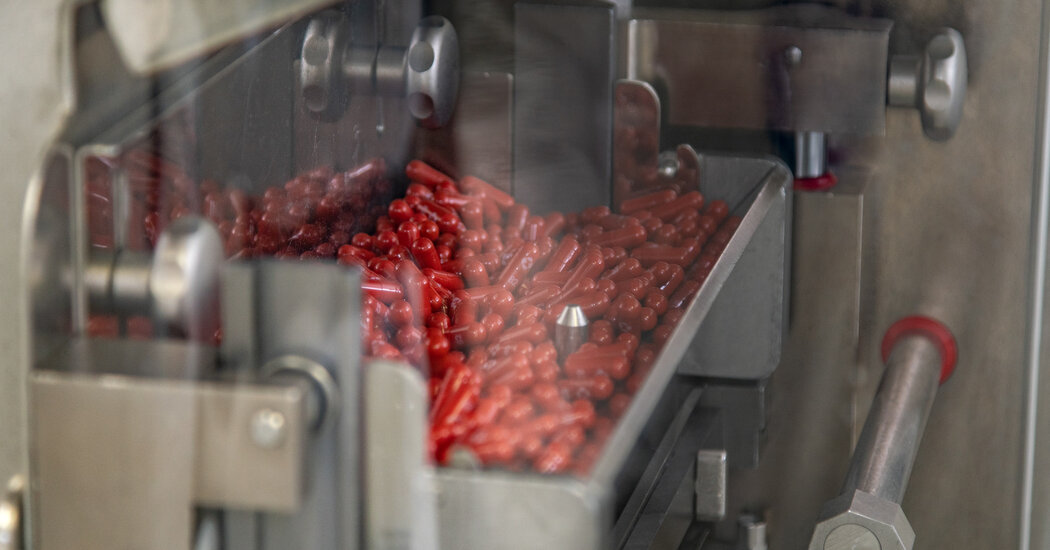 Britain became the first country on Thursday to authorize the use of an antiviral pill for Covid-19, an easy-to-use treatment that could help tame the pandemic.

The drug, known as molnupiravir and sold by the pharmaceutical company Merck, was shown in a key clinical trial to reduce by half the risk of hospitalization and death in high-risk Covid patients who were treated early in their infections. Dispensed from a pharmacy and taken at home, the drug is expected to reach many more people than treatments like monoclonal antibodies, which are typically administered intravenously at a hospital or clinic.

Britain, which has already ordered enough supplies of the pill for 480,000 people, is one of a growing list of wealthy countries that have raced to lock up supplies of the drug. Merck said last week it has reached deals to sell the pills to the governments of the United States, Australia, South Korea, New Zealand, Serbia and Singapore.

The drug is expected to become available in the United States as soon as December, after a panel of experts meets at the end of this month to make a recommendation to the Food and Drug Administration about whether it should be authorized for high-risk Covid patients. The United States has ordered enough supply of the drug for 1.7 million patients, at a cost of about $700 per person.

Britain’s regulator, the Medicines and Healthcare products Regulatory Agency, recommended giving the drug to people as soon as possible after a positive coronavirus test and within five days of the onset of symptoms. The full course of treatment is 40 pills over five days.

The regulator authorized the drug for both vaccinated and unvaccinated people who have at least one trait — such as being over 60 years old or having obesity — that would put them at high risk for becoming severely ill from the virus.

Britain is logging an average of nearly 40,000 virus cases daily, though it has recently seen a slight decline in the number of positive cases.

So far, 75 percent of Britain’s population has received at least one dose of a coronavirus vaccine, while 68 percent have been fully vaccinated, according to a New York Times database.

Sajid Javid, the British health secretary, described the Merck pill’s authorization as a “historic day” for the country. “This will be a game changer for the most vulnerable and the immunosuppressed, who will soon be able to receive the groundbreaking treatment,” he said.

Britain has also ordered enough supplies for 250,000 people of a rival antiviral pill being developed by Pfizer. The results of a key clinical trial of that pill are expected in the next few months.

Global supplies of both treatments are expected to be limited at first. Merck has said it can produce enough supply of the drug for 10 million people this year and at least double that next year.

In addition, Merck has entered into licenses with eight makers of generic drugs in India to manufacture its pill for poorer countries. The companies can set prices and negotiate supply deals.

Last week, Merck also granted a royalty-free license for the pill to a United Nations-backed nonprofit in a deal that would allow the drug to be made and sold cheaply in the poorest countries. That deal will allow local manufacturers in 105 countries, primarily in Africa and Asia, to license the formulation for the pill and start making it.

Merck said last week that it expected the drug to generate between $5 billion and $7 billion in revenue globally through the end of next year. The company is splitting its profits with Ridgeback Biotherapeutics, a small Miami company that licensed the drug and shepherded it through early human testing in the first months of the pandemic.

Tested as a potential influenza treatment before the pandemic, the drug works by inserting errors into the coronavirus’s genetic code, which stops the virus from replicating.

That mechanism, and a series of studies in animals and test tubes, have raised concerns among some scientists that the drug could trigger genetic mutations that cause reproductive harm. Merck has said its studies show that the drug is safe and does not cause worrisome mutations.

Britain’s regulator said the drug was not recommended for women who are pregnant or breastfeeding and that women who could become pregnant should use contraception while taking the drug and for four days after.