America has fewer open jobs. Is that reason to worry? 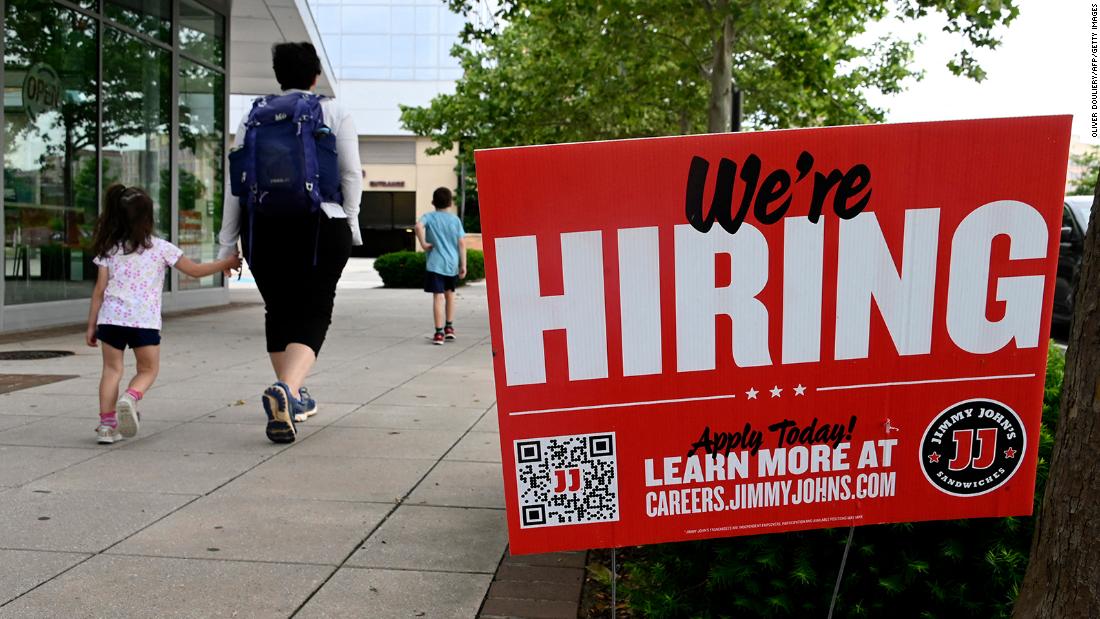 But as the US economy slows down, the dynamics are beginning to shift. Job openings dropped to 10.7 million in June from 11.3 million in May, according to data released this week. That’s the lowest level since September 2021.

“Job openings still need to fall by 3.7 million to get back to their February 2020 pre-pandemic level, but June’s print shows they are now coming down at the fastest rate since the start of the pandemic crisis,” Jessica Rabe of DataTrek Research said in a note to clients.

Why it matters: America’s economic output has contracted for two quarters in a row, meeting one technical definition of a recession. But policymakers like Federal Reserve Chair Jerome Powell have pointed to the strong job market as evidence that a recession isn’t really underway — at least not yet.

“There are just too many areas of the economy that are performing too well,” he said last month. “And of course I would point to the labor market in particular.”
If hiring starts to falter and more people are put out of work, that would cause a lot of pain. But the Fed actually wants to see some signs of this as it fights decades-high inflation. When there are too many open roles, wages start to rise quickly, which can make economy-wide inflation even worse.

The pullback in job openings could be an early sign of softness, as some employers slash open roles in an attempt to cut costs. But economists said they aren’t convinced, especially based on what they’re seeing in other data.

She noted that the number of people quitting their jobs remains “elevated.” That signals workers can still move from role to role — often in pursuit of higher wages — with ease. More than 4.2 million people quit in June, largely unchanged from the previous month.

Coming up: Attention now turns to the US jobs report for July, which arrives Friday morning. Economists surveyed by Refinitiv expect to learn that 250,000 positions were added last month, down from 372,000 in June. In that case, the unemployment rate would hold steady at 3.6%, near its all-time low.

That’s unlikely to convince Powell and the Fed that the job market is really facing enough pressure for them to ease up, and means another sharp interest rate hike in September is likely to remain on the table, Mark Hamrick, senior economic analyst at Bankrate, told me.

“The job market has a target on its back, and the Fed is not going to take its eye off of that target for quite some time,” Hamrick said.

As Covid-19 vaccines rolled out and people started venturing into the world again, DoorDash faced an existential question: Would people still want food delivered to their homes?

Halfway through 2022, the company has its answer. People are dining out more. Some are going back to the office regularly. But their appetite for delivery? It remains healthy.

The startup pointed to its acquisition of Wolt, a rival in Europe, and slightly higher menu costs due to inflation, as well as “growth in the number of consumers and in average order frequency.”

Shares are up 11% in premarket trading. They’ve dropped 45% year-to-date as investors ditch unprofitable tech firms in favor of companies that already have consistent earnings.

DoorDash lost $263 million last quarter, up from $102 million one year ago and $167 million during the first three months of the year.

On the radar: As consumers start saving more money, will they cut delivery from their routines? DoorDash CEO Tony Xu said so far, there’s no evidence of this.

“We do see some consumer spending softening, but largely, we’ve been not impacted by that downward pressure,” Xu said on a call with analysts.

One year ago, Wall Street bankers were pulling crazy hours to work through a never-ending pipeline of deals. Their reward? Record payouts during bonus season.

But times have changed. Companies worried about the outlook and rising interest rates are conserving cash instead of hunting for takeover targets, and firms that would have considered going public have decided to wait for market volatility to let up.

For bankers, that means less cash after their annual reviews. A new report from consulting firm Johnson Associates forecasts that year-end bonus pay will decline across the financial services sector, with some bankers seeing bonuses gutted by 45% or more from 2021.

“It’s been a real shock,” Alan Johnson, managing director of the firm, told my CNN Business colleague Allison Morrow. “I don’t think any of us really appreciated how much the pandemic stimulus created a bubble. … Now the lights have come on and it’s a little ugly.”

Remember: Investment banks had a brutal first half of the year. Investment banking revenue at JPMorgan fell 61% last quarter. At Morgan Stanley, it dipped 55%.

That bleak climate won’t just affect compensation for those at the top of the food chain. The dealmaking rut is contributing to concerns that banks could lay off staff by the end of this year as they look for ways to conserve costs in a more challenging business environment.

Also today: All eyes are on the US jobs report for July, which arrives at 8:30 a.m. ET.